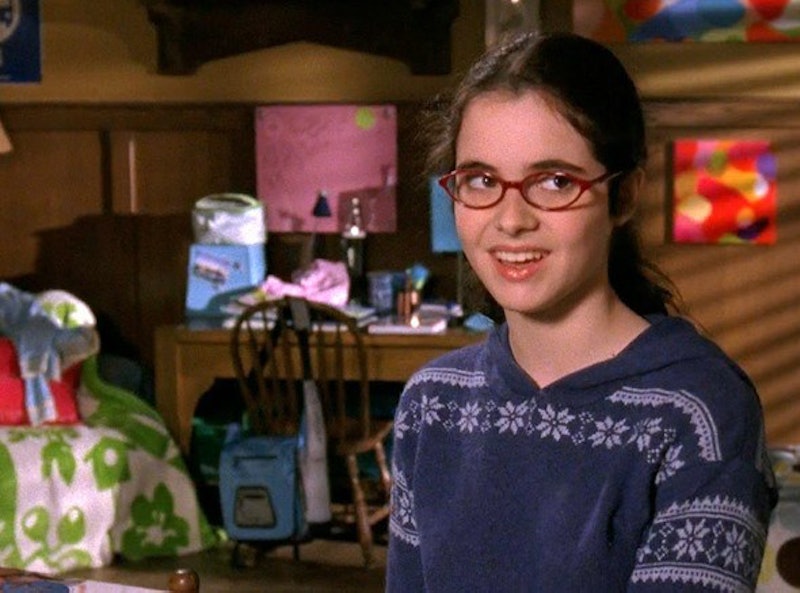 It's unpopular opinion time, but someone has to say it: the Gilmore Girls revival needs April Nardini. I know Luke's surprise daughter is far from a fan favorite. In fact, bless her adorably nerdy heart, she may be one of the most maligned characters of the series through no fault of her own. Introduced in Season 6 as a rather inorganic way to cause trouble between Luke and Lorelai, April appeared without warning with a mom that had never been mentioned before (Anna) and a sort of Rory 2.0 vibe that rubbed fans the wrong way. Still, I don't think she deserved nearly the amount of hate that she got, and an appearance in the revival would actually be a great thing to see.

Besides, while April is often blamed for breaking up Luke and Lorelai, it was the adults who mucked up that relationship. Between Luke lying, Anna randomly deciding Lorelai shouldn't see April, and Lorelai keeping quiet about her growing unease with the situation, the Luke and Lorelai relationship was doomed by the adults' inability to handle the situation maturely. April was just along for the ride. Vanessa Marano, aka April, recently told E! Online that she hopes April comes back for the revival. "I really hope they're bringing my character back because I'm such a fan of the Gilmore Girls that...I just want to be able to nerd out more," Marano said. I hope she gets the chance, because even if you resented April's inclusion in the show, she is a major part of the story, and she absolutely needs to come back. Here's why.

1. April Is An Amy Sherman-Palladino Creation

Gilmore Girls creator Sherman-Palladino introduced April to the show in Season 6, making her a character the series' fearless leader had a plan for. When Sherman-Palladino and her husband Daniel Palladino left the series in Season 7, whatever future they had in mind for April went with them. Call me a purist, but I want to know what the Pallidinos' long term April plans were.

2. She Is Luke's Daughter

The revival is set to cover four seasons, and I just don't buy Luke Danes going an entire year without seeing his daughter. He adores April and she adores him right back. She needs to be in the revival for the same reason Jess does: because she's Luke's family.

There is a difference between not liking how April was introduced and not liking April. She was an adorable, science-loving, awkward, self-assured young woman. April had zero filter and she took all of life's curve balls with serious maturity. Fans deserve to see April for April, rather than as a plot point.

April and Rory didn't share many scenes together, but they played off of each other so well when they did. Remember the unicorn conversation in Season 7? Actual perfection.

It was clear Marano was talented during her Gilmore Girls days, but she has grown so much as an actor since then. She is one of the best reasons to watch Switched at Birth, and I would love to see what she could do with Sherman-Palladino's dialogue now that she is an adult.

6. Lorelai & April Could Have A Beautiful Relationship

Lorelai and April got along beautifully when Lorelai threw her birthday party. The potential to see these two characters' relationship grow was always there. If Luke and Lorelai are going to be endgame then Lorelai and April need to form a true bond, and watching it happen would be lovely.

7. April Is An Amazing Role Model For Girls Interested In STEM Subjects

The more female scientists on TV the better.

8. April And Luke's Relationship Was The Best Part Of Season 7

Season 7 was not always an easy season to watch, but the father/daughter dynamic Luke and April had was easily the best part. Those two deserve to have more time together.

9. The Revival Would Be Weird Without An April Update

Not mentioning April is not an option. It would be bizarre for Luke not to talk about his now college-aged daughter who will no doubt be going through all kinds of milestones her dad should be there for.

10. The Entire Danes Family Needs To Share A Scene Together

Seeing a character come full circle is always rewarding. When the series started, Luke was a grumpy loner who lived in a one room apartment above the diner, but the show slowly revealed how important family was to him. From the way he honored his father's memory to stepping up as a father figure for Jess, Luke always put his family first. What better way to show that than by getting Luke, April, Jess, Liz, T.J., and Doula all in one room together?

April was a sweet kid, and there's no way she didn't grow up to be an awesome adult. She needs another chance to shine.

Here's hoping April will return to Stars Hollow to visit her dad — the revival just won't be the same without her.