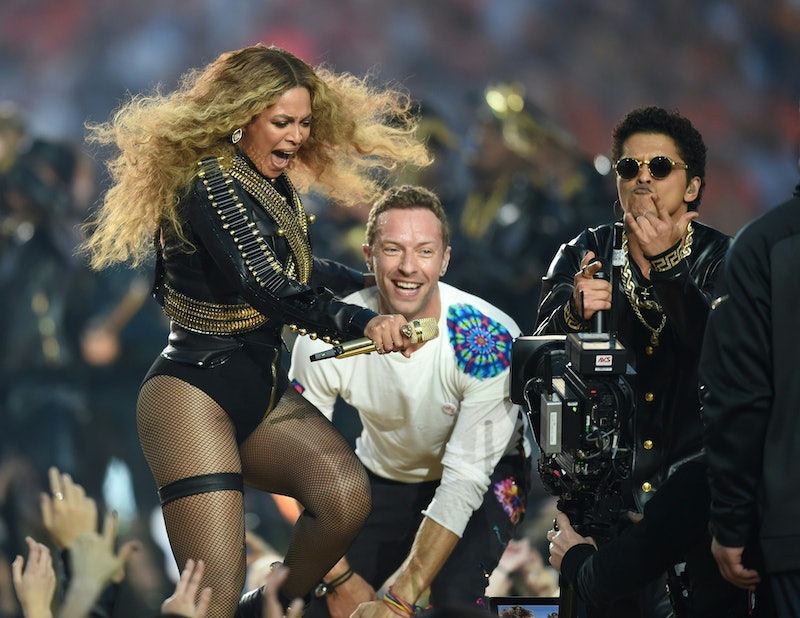 Beyoncé may have been billed as a "guest star" for the Super Bowl 50 halftime show, but once she stomped onto the field, there was no question that she was the star of the show. It's Bey's world, and we all just live in it — even Coldplay, who were the actual headliners of the night. During the show, Beyoncé performed an excerpt of her new song "Formation" and joined other guest star Bruno Mars for a little duet of "Uptown Funk" before finally getting on stage with Chris Martin and Coldplay to finish up. No surprise, Beyoncé stole the show, and here are the Beyoncé Super Bowl GIFs that prove she was the real halftime star.

Not only did Beyoncé steal the spotlight by announcing a new world tour — The Formation World Tour 2016 — she also dominated during the show with her excellent dance moves and unforgiving slayage of everything. Beyoncé sang, she danced, she brought explosions, fire, and all of the swagger. Basically, she started singing, and everyone thanked Coldplay for so generously volunteering to be her opening act. Don't believe me? Here are the 11 Beyoncé Super Bowl GIFs that prove Beyoncé at halftime was the real reason to tune in.

1. Her Mere Presence Set Off Fireworks

Beyoncé lights up everywhere she goes. (Also, shoutout to her army of dancers.)

2. Beyoncé And Her Army Were FIRE

Beyoncé smiles because she knows she's the best.

She owns us and she knows it.

9. When She Almost Fell, But Didn't 'Cause She's Beyoncé

Like any true queen, Beyoncé knows how to recover.

Bruno Mars, Imma let you finish, but Beyoncé is owning this halftime show.

Let it never be said that Beyoncé isn't generous. The singer allowed Chris Martin and Bruno Mars to share the spotlight in their epic finale.

Can Beyoncé just perform at every Super Bowl halftime show from now on?

For more of Bustle's football coverage, check out the video below: