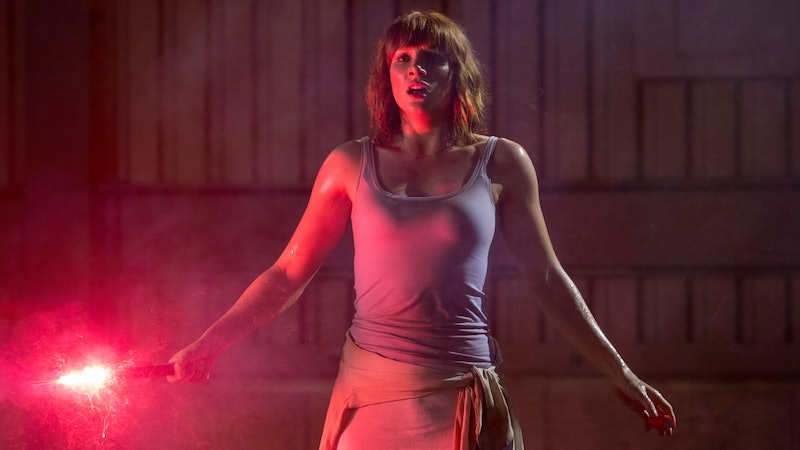 Statistically speaking, you have already seen Jurassic World at least once. That's just a fact: the 14-years-in-the-making sequel had the biggest opening weekend of all time, out-grossing the previous record holder, Marvel's The Avengers, and raking in $208.8 million domestically. And if you have seen Jurassic World, then you likely have some opinions on its lead female character... because everyone else sure seems to. However, before I share what others have been saying, let me lead with this: I believe Jurassic World 's Claire Dearing is a kickass feminist hero.

This is admittedly an unpopular opinion. Played by Bryce Dallas Howard (no, not Jessica Chastain), park operations manager Claire Dearing has been the center of controversy since before the film had even premiered, with many critics decrying the portrayal of her character as dismayingly sexist. For instance: Avengers director Joss Whedon was the first to publicly call out the film, referring to a promotional clip featuring Claire and Chris Pratt's Owen Grady as "'70s era sexist" on Twitter. Although Whedon later apologized (and deactivated his Twitter account) and Jurassic World director Colin Trevorrow directly addressed Whedon's remarks, the perception was already in place. Many audiences went into the film expecting to see sexism, and — judging by the indignant headlines making the rounds over the weekend — they found it in spades.

Many articles, however, took most issue with the script's treatment of Claire: alternately criticized by Owen as too uptight and by her own sister as not maternal enough, the career woman is approached on all fronts by people who want to change her.

Take a look this exchange between Claire and her sister, Karen (played by Judy Greer), again. When discussing how important it is for Claire to bond with her nephews, Karen starts saying, "When you have kids of your own — " Claire cuts her off: "'If,' not 'when.'" But Karen pushes: "Not 'if,' 'when!'" Who do you think the audience is supposed to side with in this situation? Those going in expecting to find sexism will probably think the screenwriters' allegiances are with Karen here, as though the writers think telling a woman to start popping out babies pronto is a perfectly acceptable thing to do.

But remember — Karen literally pawned her children off on her sister so she could get a divorce without telling them. Some critics say that the film paints Claire in a bad light because she doesn't have time to spend with her nephews, Zach and Gray... as though this was a voluntary vacation that everyone involved signed up for, instead of a slipshod excuse to get the kids out of town while their parents hammered out the details of their settlement. Do you think Karen even asked Claire if this was a good time for her? Is it Claire's fault she had an incredibly important meeting on the day her nephews were left on her doorstep?

This scene isn't the film's way of establishing Claire as not maternal enough. This is its way of establishing Claire as a career-driven person that nobody takes seriously because she's a woman. Her male colleagues think she just needs to let loose a little. Her own sister thinks she just needs to get pregnant. But all Claire wants to do is efficiently run the most successful theme park on the planet. Other characters within the film may disparage Claire for that decision, but the film itself does not.

Much has been made of Claire's outfit in the film, her heels in particular. Twitter was even filled with incredulity over the fact that Claire never once took off her heels:

Given the level of vitriol, you would think Claire was sporting hotrod-red sky-high stilettos instead of a pair of simple beige pumps. And it's not like Claire knew her park was going to fall apart when she woke up that morning; she dressed sensibly for a business meeting. What was she supposed to do when the Indominus Rex started running amok? Swing by her bungalow for a pair of flats? Run through the jungle and across streets scattered with broken glass barefoot?

To me, having Claire keep her heels was a refreshing change. Few things symbolize femininity as perfectly as high-heeled shoes — so the fact that Claire kept them on isn't sexist, it's extremely important to her development. Other characters always wanted Claire to change, to become either more or less feminine. But at the end of the day, she didn't have to change. She already had everything it took to survive... and she didn't have to discard her femininity to find it.

It's a common trope of action movies that a female character only becomes badass when she sheds such typically female trappings. In 1984's Romancing The Stone, for example, Kathleen Turner is forced to modify her footwear in order to more effectively tromp through the jungle. Not only that, but a man does it for her: Michael Douglas chops the heels off her shoes with his machete. "These were Italian," Turner moans. "Now they're practical," Douglas shrugs.

I kept waiting for a groan-inducing shot of Claire's pumps getting stuck in the mud or her weak lady ankles giving way so Owen could catch her. But absolutely zero attention is devoted by the film to Claire's choice of footwear; she wears them as comfortably as Owen wears his boots. She's a much more unapologetically feminine character than many female leads seen in action films throughout history, and she's able to remain that way while saving the day. That's the opposite of anti-feminist.

Howard herself recognized this fact, as Trevorrow related in an interview with io9: "She insisted on wearing those heels. They meant something to her personally. [...] She felt like surrendering the heels felt like surrendering the femininity of the character." Honestly: One could easily make an argument that saving the world in heels is actually more difficult than saving the world in combat boots. Do you think Owen could have run away from that T-Rex while wearing pumps? (OK, maybe Chris Pratt could — but Owen Grady would have been lunch meat in a matter of seconds.)

Speaking of saving the day, Claire is the one who does the most of that in Jurassic World. Sure, Owen "saves the day" in the general sense that he's the one who trained the raptors who eventually bring down the Indominus Rex. But when it comes to the specific instances of in-the-moment life-rescuing, Claire does more of it than anyone. She's the one who kills the dimorphodon about to snack on Owen. She's the one who drives the boys to safety while being pursued by vicious velociraptors. She's the one who thinks to unleash the T-Rex while Owen, Zach, and Gray are all cowering helplessly — and it's this final act that ultimately saves the day and defeats the rampaging Indominus.

Owen may be a fun, rough-and-tumble guy who's good with animals — but he could never run a multi-billion-dollar complex like Jurassic World. Claire, on the other hand, has the intelligence to handle the day-to-day operations of a park visited by thousands of tourists every day, the problem-solving and bravery necessary to save lives, AND the stamina to outrun carnivorous monsters while wearing pumps. Who's the real hero here?

Trevorrow previously stated in an interview with the Italian site Bad Taste that Claire, not Owen, was the real protagonist of the film. It was hard to believe him before actually seeing the film, given how heavily the promotional material relied on Pratt's recognizable face. But, sure enough, Jurassic World is primarily concerned with Claire's arc. As likable as Pratt is, Owen's character remains largely unchanged. It's Claire who's truly affected by the events of the film. Some may have been dismayed to see her acting more maternal towards her nephews by the end of the film... but who wouldn't in that situation? Her newfound affection for Zach and Gray doesn't mean she's about to go get herself pregnant on her sister's advice; it means she's a human being who didn't want to see two young children eaten by dinosaurs, and who bonded with other humans through a time of intense crisis.

Will Claire Dearing go down in the annals of cinema history as one of the most kickass female action heroes of all time? Probably not. Is the movie still flawed in many ways? Yes. But does Claire deserve better than the bad rap she's been getting? Absolutely. In my opinion, this is a classic example of "you get out what you put in." Unfortunately, many viewers were primed to watch Jurassic World through a lens of sexism before they ever even entered the movie theater, and they found it in Claire's choice of footwear.

But I think a closer examination of the film reveals some surprising depth to her characterization. Heroes don't have to sport machine guns to be feminist. In the real world, feminists come in all shapes and sizes — and they do in movies, too. After all, is there really a difference between Owen dismissing Claire because she's too uptight, and audiences dismissing the character just because she wears high heels?