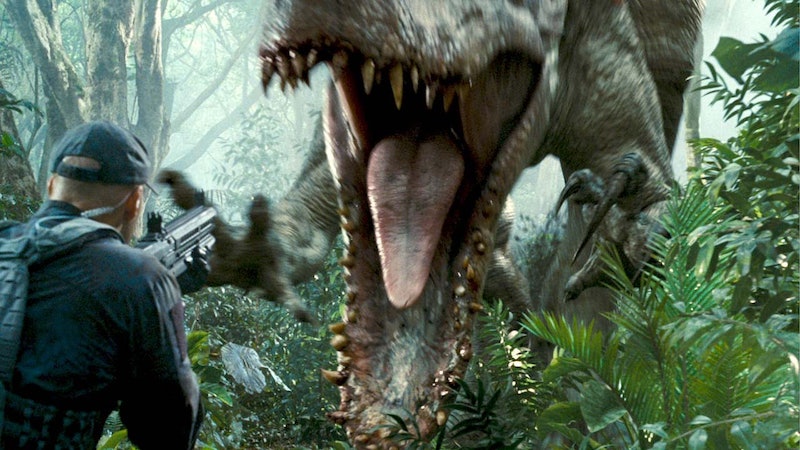 There's only one question on everyone's minds right now — and by everyone I mean everyone who loves dinosaurs, so yes I mean everyone — and that is this: will Jurassic World be a box office hit? Will it tyrannosaurus-wreck the competition? Or is it simply pteroble? Will it be dino-mite or a hot mesosaurus? (I can keep going with these dinosaur-themed puns all day.) The reviews are still coming in, so it's hard to predict what the final word will be... but, right now, critical opinion seems to be skewing positive. As of publication, with 107 reviews counted on RottenTomatoes.com, Jurassic World is currently at 71%. (That's 76 "fresh" reviews and 31 "rotten" ones, for those of you following along at home.)

General consensus appears to be that, while World can't come close to measuring up to the legendary heights of Steven Spielberg's 1993 original Jurassic Park (although, to be fair, no movie regardless of audience and critical appeal could match those daunting heights), it is easily the second best entry in the franchise. Of course, when you're comparing this film to 1995's lackluster The Lost World: Jurassic Park and 2001's 93 minute facepalm Jurassic Park III, that may seem like the very definition of damning with faint praise. But most critics were much more effusive than that.

While Variety's Scott Foundas bemoaned that the film is, "a giant wind-up machine that’s all roar and precious little bite," Rolling Stone's Peter Travers gushed that director Colin Trevorrow (Safety Not Guaranteed) recaptures the thrilling spirit of the Spielberg original [...] with fresh provocation." Naturally, some reviewers landed somewhere in the middle, like The Hollywood Reporter's Todd McCarthy, who acknowledged "the story's formulaic structure and the predictable nature of its cautionary stance on playing God" while still thoroughly enjoying himself.

Of course, critical opinion is probably all but a moot point in this case. Even if the reviews had come out weeks ago, and even if they were uniformly terrible, Universal Studios has the good fortune of possessing a film that the industry refers to as "critic-proof." Jurassic World is a perfect storm of factors that guarantee it will make big bucks this summer.

The biggest factor in play here is the mere fact that World is the first entry in the Jurassic Park franchise in 14 years, so there's an inherent nostalgia factor involved. Simply seeing that familiar logo and hearing the rousing strains of John Williams' classic score was likely enough to get millions of butts into millions of uncomfortable movie theater seats. World isn't even the first long-awaited fourthquel of Summer 2015, either.

Mad Max: Fury Road was the fourth film in its franchise, came out a full 30 years after the last installment, and was definitely more of a niche brand than Jurassic Park — and yet it did better at the box office than anyone expected. Sure, it may have come in second place to Pitch Perfect 2 during its opening weekend, but it has gone on to gross an impressive $130 million, easily surpassing Mad Max Beyond Thunderdome's previous franchise record of $36 million. And if an R-rated, hyper-violent, two hour long chase scene through a bizarro post-apocalyptic landscape can outperform expectations, than so can a PG-13, kid-oriented dino adventure.

Secondly, Jurassic World is a film with audience appeal so broad that it's likely the object of envy for every movie studio that's not Universal right now. Not only will the sequel attract the attention of the original movie's now-aging fans, but it will also bring in a whole new crowd of youngsters due to the fact that it's A) an easily-accessible quasi-reboot, and B) IT'S ABOUT DINOSAURS, YOU GUYS. What little kid doesn't want to see these extinct animals come alive on the big screen?

Last but certainly not least is what I like to call the Chris Pratt Factor™. To be specific, this is the phenomenon that occurs when you cast the former star of NBC's Parks and Recreation as the dashing hero of your family-friendly adventure movie. It worked for Guardians of the Galaxy and The Lego Movie (and will probably work for the inevitable Indiana Jones reboot, if Hollywood ever gets moving on that, please god yes give it to me now), so why would anyone bet against it working here? Star-Lord + dinosaurs = checkmate, Summer 2015.

According to Variety, ticket sales for Jurassic World are already outpacing every single blockbuster from summer 2014. With pre-sales projecting a $115 million opening weekend for the sequel, that puts it on track to surpass last year's X-Men: Days Of Future Past, Transformers: Age Of Extinction, and, yes, even Chris Pratt's own Guardians Of The Galaxy. While World will still likely come in behind this summer's behemoth Avengers: Age Of Ultron, it's certainly poised to take a giant bite out of the competition.

So wherever this movie ends up landing on the "Tomatometer" probably won't have much of an effect on the film's eventual box office gross. While reading critics' opinions may help some audience members adjust their expectations accordingly as they prepare to don their 3D glasses, even an embarrassingly low score probably won't keep many people away from the theaters. Heck — everyone excited enough to see Jurassic World during its opening weekend probably already bought their tickets well before the reviews started rolling in, anyway. It must feel good to be Universal right now. The soon-to-be victims of Jurassic Park's latest security meltdown? Not so much.