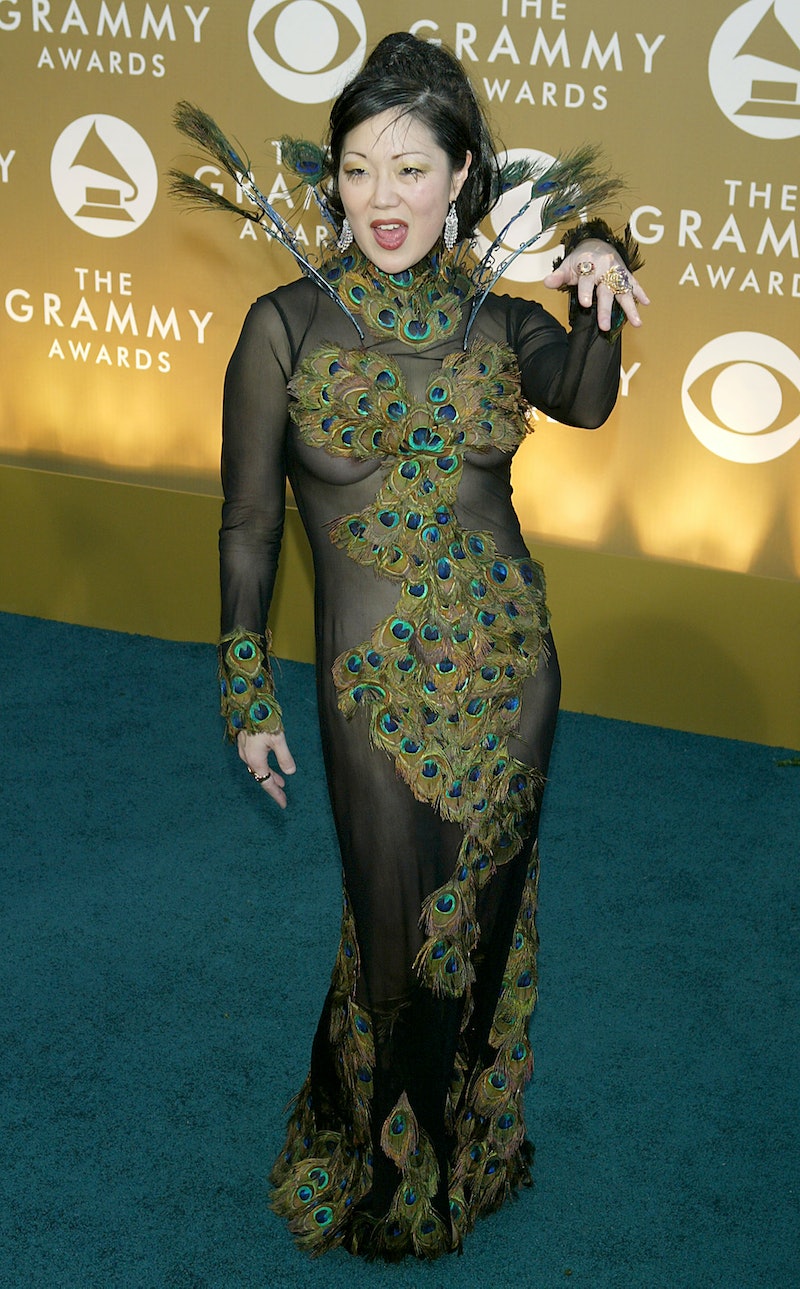 The fashion and style at the Grammy's never fails to be glamorous, awesome and, well, a little ridiculous. As we prepare for the annual show coming up this Sunday, let's reminisce on the most insane outfits from past Grammys Awards. Because if you thought Lady Gaga's egg arrival was officially old news, think again.

I don't know what it is about the Grammys, but out of all the awards shows out there, this one definitely wins for having the most insane red carpet. The dress code on the invitations must be something along the lines of "the crazier the better" or "odd, ridiculous, and somewhat disturbing outfits are welcome," because there's always someone who wears an out of this world ensemble — and not necessarily a good one. Whether they are uber-sexy, super costumey, or just downright weird, these Grammy attendees must have been vying to get on this list, because it's hard to understand why else someone would dress like this for one of the biggest annual awards shows of the year.

Without further ado, here are 23 of the most insane, absolutely ridiculous, and memorable outfits that have been worn at the Grammy Awards. And here's to hoping a few from 2016 will out do them, because, let's be real folks, — outfits like these are reason enough to watch the red carpet.

I don't think I'm alone when I say she looks like a goth Mary Poppins.

Ahh, J.Lo's green Versace dress will go down in history. Even today, the dress is risky, but Lopez seriously made it work.

Gaga's galaxy dress was gorgeous, but also a little weird.

She took things to a whole different level the year after when Gaga arrived at the Grammys in an egg. Yes, you read that correctly. I'll give you an A for effort, Gaga.

Maybe I'm missing something here, but I don't exactly think Crow's outfit was Grammy-appropriate. But hey, you got to give her props for rocking those cowboy boots on a red carpet!

Nicki? Is that you? Underneath that hood and beside the pope?

I think this may be taking the "barely-there" trend a bit too far.

They're matching! Kinda cute, kinda overdone. But we'll forgive them because, duh, they're fabulous.

Now this ensemble is a little more difficult to forgive. I'm not even sure what's happening here.

OK Stop With These Outfits is more like it, am I right?

I admire her commitment to this dress, but boy was it bizarre.

You can buy me a drank, T-Pain — just as long as you promise never to wear this outfit again.

Don't bring up Kanye's 2006 Grammys outfit, because that may just be the next thing he rants about on Twitter. He's really come a long way as far as style goes.

She's just a sk8ter girl. Can she make it any more obvious?

This sheer dress featuring feathers certainly makes Cho look like she could flap her wings and fly at any moment.

Even during the Lady Marmalade days, half pants should never be allowed. Sorry, Pink.

Rihanna's sheer 2011 Grammys dress was certainly unconventional when it comes to awards show garb, but I personally thought it was super chic.

M.I.A.'s outfit was a little odd, but also quite cute. Got to applaud the fact that she wore sneakers!

I have no words.

Is that a printed corduroy suit, JT? Because it's making my cringe...

I love this Moschino suit, but the ensemble together seems a little costumey, especially for the Grammy awards. Maybe leave out the fur stole and the pink bow tie next time, Charlie.

There you have it, some of the most insane outfits from Grammys past. Let's hope this year is a little easier on the eyes!

Want more style? Check out the video below, and be sure to subscribe to Bustle’s YouTube page for more hacks and tricks!