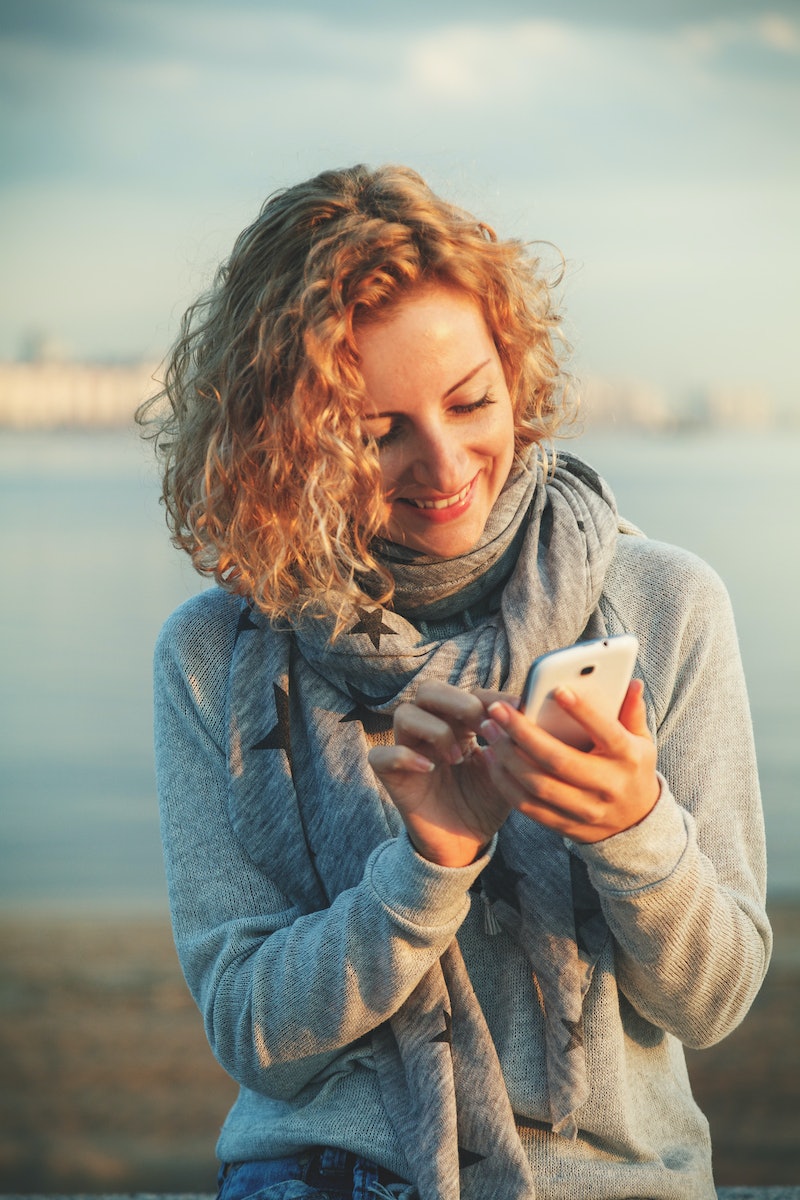 Dating apps have a bad rap: They are often associated more closely with promoting casual hookups than actually connecting two gentle souls for an actual, head-over-heels, yes-yes-yes relationship. There are, however, some dating apps that are good for relationships, and though they are somewhat few and far between, they're out there.

Actually, most apps — even Tinder — can yield a relationship, as long as you are super clear about what you're looking for in your profile and spend some time using them. Tinder just gives you one quick shot at clarification, and you'll still match with some creeps, but if your profile photo is sweet and elegant, and your tagline says something about how you're looking for love at the outset, you'll have a better chance at matching with the percentage of people on there who are ISO love.

But Tinder is definitely not the only app out there. There are tons of dating apps out there, and though some of them have a more casual bent, there are plenty of more reliable options. Here are 15 other options, on which you might have a higher chance at matching with "the one" — or at least someone worth sticking with for a while.

On the opposite side of the spectrum from apps like Tinder is The Dating Ring. This platform has various levels of membership, starting with free matches and going all the way to $2,500 and up for "pre-screened dates … VIP treatment, concierge, date feedback, and more." The Dating Ring is for "those who are looking for a serious relationship and aren’t meeting the right people at bars or through friends," or "the anti-Tinder," writes SF Weekly.

The word on the street is that Hinge is for those who are a bit more on the serious side, in part by virtue of the fact that you log in with Facebook and you're matched with friends of friends, so you could potentially tattle on a total jerk to a mutual friend. Plus, you can select your intentions from a menu on your profile: casual, dating, relationship

Align matches you based on your horoscope, and though it's all in good fun, I feel as though it might have a higher relationship-possibility quotient. That said, horoscopes can totally be used to match people based on their bedroom compatibility, so TBD on that. Give it a spin and report back.

Instead of filling out a boring old dating profile and taking some fresh selfies, Glimpse connects to your Instagram, so your profile is mostly populated by your stylish Instasnaps. Like Hinge, any dating app that connects via a social media platform adds an additional layer, and it'll be easier to see what your potential date is like before meeting.

Tinder is notorious for being a hook-up app, but they also apparently match people who both want real relationships every day. Or so says their website. I personally don't know anyone who met on Tinder who started actually dating, but I have heard of it. The key here is being selective and transparent about what you're looking for.

Though I haven't met anyone personally who fell in love via Tinder, I have met people who were introduced on OkCupid — and are now married. I can't promise that this will be the happy ending for everyone, but I'm here to vouch for the fact that it has happened at least once.

I also have a couple of friends who met on Coffee Meets Bagel. The app gives you just one match per day, which is pretty lousy pickins' if you're just looking for a quick hookup. But in the search for love, one solid connection each day trumps a ton of swiping right.

Just like Coffee Meets Bagel, you get one match per day on Once. (The name says it all.) According to their website, "matches offered in the application are chosen by our team of matchmakers among the active users of the application." So there's an actual real live person saying to themselves, "Hmm, this girl likes Jeff Buckley … and this girl likes Jeff Buckley … and they both used to be modern dancers … and they both said they loved the Elena Ferrante books … let's match them up." Or something very scientific along those lines.

Though the name sounds pretty sex-oriented, Score uses emotional compatibility to match users. You answer a bunch of questions via the app, which is designed to feel like you're playing a game. And then you're only matched with people who have similar answers and values. Why go through all the trouble if you're just there to hook up?

First off, At First Sight is the brainchild of Bachelor host Chris Harrison, and we all know how many heartstrings have been legit pulled by that TV show. Though I'm rolling my eyes a little bit, Heidi Julavits wrote in The Folded Clock a lot about how she thinks people really do fall in love on that show, and she might be right. In any event, this app uses video to connect people, which is definitely something different from most apps. It's being retooled right now, with plans to relaunch next month.

This app concentrates on proposing dates: How about we go see the new Coen Brothers film? How about we get a manicure? Though you could go with something more vulgar, How About We is set up automatically to encourage actual dates — which could potentially lead to an actual relationship.

Plenty of Fish often gets left out of dating app roundups, just because it feels kind of … old. But it still exists, and those who are on it might actually be looking for a relationship.

Here's a brand-new app, and it looks pretty cool. Teased is about personality first, photos second, and the reviews on the app store are positive, with people saying that it led to second and third dates and isn't "sleazy." Halfway to love!

Meetville matches you based on "common interests, same values and beliefs, and psychological compatibility." It's about dating, not sex, and it promises to give you "smart matches." Worth a try.

Speaking of matches, Match for many years seemed old and fussy, but it is all about love connections, so if that's what you're in the market for, might as well give it a shot. It can't hurt — and it just might lead to something serious.