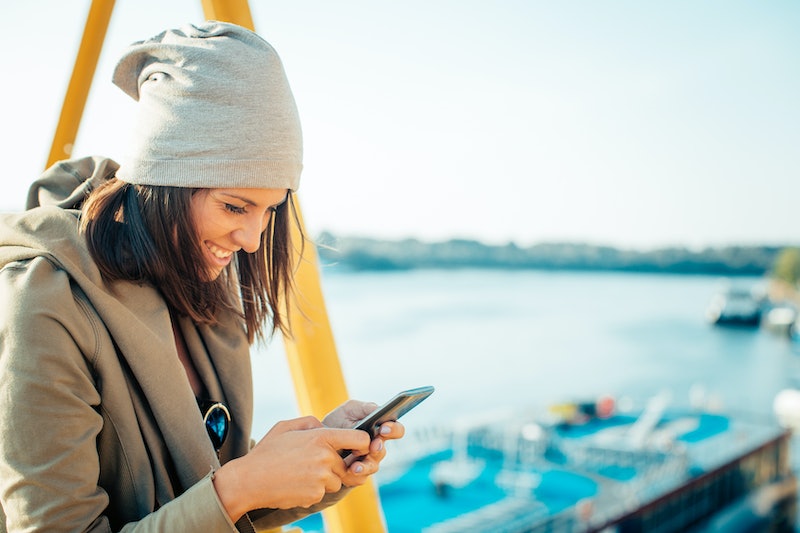 Trying to find the best dating app can be headache-inducing, especially if you're new to the game. Do you go niche based off your favorite food or your profession? Do you listen to what's been effective among your friends? Do you base it on what type of relationship you're looking for? After working on several articles about singles' dating app preferences for hookups, dating, relationships, or even just enjoyable ones to use, I've quickly realized finding people who are actually happy with a dating app can be like pulling teeth.

Luckily, Applause, an app quality company, just saved you a ton of time, precious cellular data, and exhausted thumbs. For the second annual Applause Dating App Quality Index, the company analyzed the state of the country's most popular dating apps by looking at consumer ratings from Google Play and the App Store to determine which ones people actually like — and which ones need to make some serious changes. And, you'll definitely notice some major players (ahem, Tinder? Grindr?) missing from the rankings.

For the study, niche apps, like FarmersOnly Dating, Jdate, and Christian Mingle, were not included. (Yes, there are a lot more than 97 dating apps available for you to download if you can believe it!)

After going through every rating and review from the top app stores, they created a report with mobile app quality score, as defined by customers, on a scale of 0 to 100. On average, the top U.S. dating apps fall behind other apps in quality by 23 points, which makes sense because I'd assume most people wouldn't rate a dating app highly where they're not finding dates, hookups, love, or whatever they're looking for easily — even if they use it multiple times a day and have been on it for years. Arc also says users are quick to judge based off their first experience in signing up for a dating app.

So, how do 1.5 million U.S. consumers rate the 97 most popular dating apps? Well, what you'll quickly notice is that a lot of the best-rated apps are not exclusively dating apps, and you may not even recognize many of them. A lot of these are really social networks where you can chat with people from all over the world, which is certainly a far cry from the popular swipe right/left geo-located dating apps that keep popping up. But hey, these users on social apps are happy — and perhaps apps meant solely for dating create too many expectations. With more than 10,000 app store reviews, these 11 dating apps were the top-ranked by users, all coming in with scores above 50.

Never heard of this one? Me either, but it seems like now's the time to get to know it. With their tagline" "Life is difficult enough. Jaumo simplifies flirting and looking for a partner," the app had 22K reviews and comes in as the top-rated dating app.

This site is new to me but so far I find it easy to use. I've been getting a lot of responses but the men aren't following through with continuing the conversations. There are a few scammers here. Look at the profile and Trust your gut feelings. I always ask questions and they always slip up. Overall a great site just haven't connected to anyone yet.

Known for their compatibility ratings, the free dating site's mobile app, which has a Tinder-like function called "QuickMatch", says they'll "multiply your odds of finding a date by, like, 1000000%." And for the majority of 85K consumers rating the app, this may be true.

Let me just say I'm not a fan of Internet dating because I come from a different era however, this app surprised me because I met some really nice down- to-earth men on here. I like the questions because you can see your similarities and even though you have to pay to see your likes you have the option of looking at your email (as opposed to looking through the OKcupid app) to see who likes you then you can decide if you want to pay or not. I also love the disable feature because I picked 3 guys I really liked and then disabled (so I wouldn't have any distractions) then if it doesn't work out you just sign back in and do it again. Just meet people in public and have fun! I've been on here several times and I enjoy it because of this app I have people to go out with.

The "missed connections" dating app, which shows you people you've crossed paths with, is a hit among singles. For the majority of the 14K users rating the app, this is newbie is turning out to be an effective one.

Limited community but has great potential! As I said in the title this is a fairly new app so don't expect a lot of people on it yet time find. That being said, it is a great concept and I can expect this to be a very popular app in the future. Will likely rate higher later!

About 13K consumers have spoken: Scruff is the gay dating app to know. The free app, which has over 8 million users, boasts they have "the most guys you are into: muscle guys, masculine jocks, bears, rugged outdoorsmen, college guys, military servicemen, geeks, and more" — and they can be in your 'hood or across the world.

Probably the best gay dating app. Too bad it's such a resource hog. App is quite slow, makes my phone hot and completely sluggish. I think it's time to optimize this thing a bit. Don't make me regret my Pro subscription ^_^'

Miss the days of AOL chat rooms? Well, you don't have to. Over 100 million people use Moco to flirt in public chat rooms, group chat, and privately.

Good social app I really like the UI in the mocospace app, especially compared to the website. My username is faded_one and that was one thing I wanted which the option to change my username. Still getting used to using it on a new phone but I'm having fun learning everything! A+

If you thought Scruff was the only dating app option for meeting a rugged gay guy, think again. GROWLr is a social network solely for gay bears. With over 5,000,000 GROWLr members, you can chat with guys nearby or all over the world — and even send voice memos.

Everything about Growlr is refreshing: the app structure, the clear guidelines, the message thread behavior, the powerful search/browse tool (phrasing), but most especially the options we're given for reporting users that are misbehaving, willfully or otherwise. It feels like there's a customer service structure behind the scenes ready to take my feedback seriously. Most of the dudes that I've spoken to on Growlr have been respectful and decently-mannered (with the notable exception of the usual proto-stalkers in my town). I haven't been contacted and judged by freelance activists patrolling profiles for anything that might run contrary to their own private preferences (like on Scruff or Grindr) and I feel comfortable enough to interact honestly.

The app calls itself "The world's largest app for meeting new people" — and with millions of people from across the globe, connecting with others for romance or friendship is possible wherever you are.

So, after using this app for about a month and a half- I'd definitely refer it to any individual who is looking for a nice conversation. Granted the guys can be very inappropriate at times and some of the women seem to be super shallow- and don't even get me started on all the fake accounts and cat fishing... None the less, there are a few people on this app that are gems. And those few people and the conversations I've had with them make up for all the crap you have to put up with. :P

Also a social network, Qeep calls itself "the world of friends" and is actually a mobile gaming and entertainment network where you can play games, chat, send pics — and flirt.

the number one site qeep is best app ever .you feel your friends are with you on qeep .qeep on

Another social network for meeting new people, MeetMe has 100+ million users and helps you find new people nearby to chat with.

Great App This is a good app to use to find people near you. Only problem, it crashes every once in awhile. Other than that, I would recommend it.

Here's another one that's not specifically for dating: With over 298 million users, this app says it's "great for chatting, making friends, sharing interests, and even dating!" They have a game called "Encounters", which matches you with other users.

I've had a lot of good interactions with some very nice and interesting people on here so far. There r many whom I'd like to get to no better and hopefully get to b theirs and them as mine

With seven million guys at your disposal, Hornet is a social app for gay, bi, and curious guys to meet each other — and according to most of the 11K reviews, a good one.

Great Easy to use and great. There's no fake profiles here. I only wish it made it easier to filter profiles and distance

So where's Tinder? Hinge? Coffee Meets Bagel? Check out the graph below to see how the other dating apps made out in the rankings: