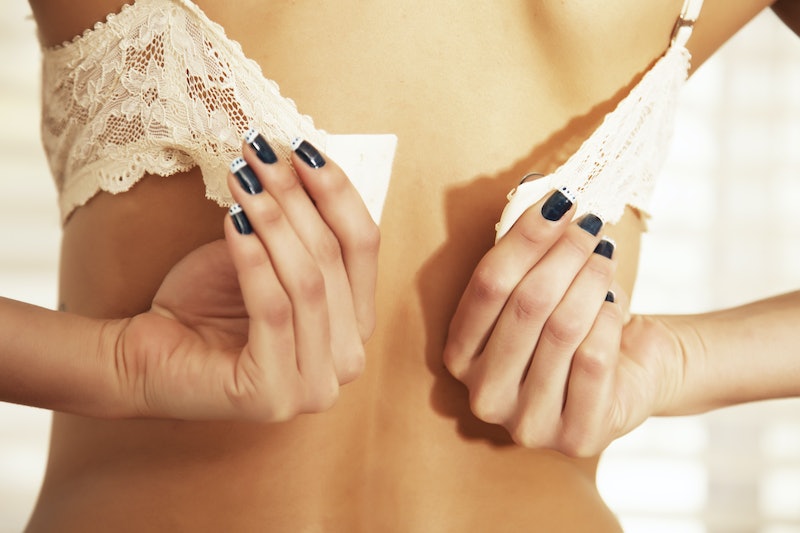 We all have our own weird routines that allow us to go as long as possible without doing laundry. There's only so far we can take it, though, before our clothes start to turn on us and demand to be cleaned. And that includes the undergarments we wear on a regular basis, which are more sensitive than we give them credit for. Yes, I'm sorry to be the bearer of bad news, but our bras need to be washed more often than you might think.

Even though our bras might get washed less frequently than our shirts, the truth is that the closer something is to your body, the more frequently you should be cleaning it. This basic instruction comes from a professional, Mary Begovic Johnson, senior scientific communications manager of Procter & Gamble, who told Buzzfeed that you really shouldn't be wearing the same bra more than three to five times in a row. Another way to put it is that you should aim to toss your bras in the washer at least once a week.

This isn't one of those mom-like suggestions you toss aside because, well, she's a little paranoid. No; there are some actual, real-life consequences that come from failing to wash your bra. Whether it's acne or disagreeable scents, you don't want to wait around to witness what a dirty brassiere has to offer.

Here are six gross things that can happen if you don't wash your bra often enough.

1. Nasty Things Will Accumulate On Your Bra

Bacteria, oil, dirt, lotion, microorganisms, yeast, fungi — these merely make up the tip of the iceberg (or nipple, as it were). The longer you refrain from washing your bra, the more these nasties assemble without your permission. New York dermatologist Joshua Zeichner says these things generally aren't dangerous when they come into contact with your skin, but put them all together in one place, unsupervised and left to their own devices, where they'll transform into something ominous, as we'll see below.

2. Your Bra Will Start To Smell — And That Smell Might Rub Off On Your Other Clothes

I'm sure you've learned by now, being an adult and all, that things stink if they don't get washed often enough. Your bra is not exempt from this. It doesn't matter how many times you spritz a little perfume on it as you get dressed in the morning; there will come a time when it's so dirty that it smells like a gym locker room you've become immune to. And that faint smell could potentially rub off on your other clothes, meaning you could be walking around with a generally unpleasant scent. Your friends and coworkers deserve better. Toss that bra in the washing machine.

Deodorant is your best friend — until it sits on your undergarment for several days in a row and leaves a yellowish-beige stain on your lacy bra, that is. Dirt and oil like to gather together too, resulting in sweat discolorations that will be tough to get out (I hear baking soda as a prewash treatment works wonders).

4. You Could Get An Acne Breakout

This is especially likely to happen if you're exercising in sports bras a lot. Sweaty undergarments are one of the most common causes of body acne, and if you've never had it, don't bring it upon yourself. Because bras are so tight and close to the skin, all the grimey bacteria that has built up over time can easily cause friction. Acne happens anywhere that sees a lot of rubbing and excess heat, so if you don't wash your bra enough, you may be hit with some bacne, as well as pimples along your rib cage and underboob area.

While you have a little more wiggle room with your everyday t-shirt bras, you can't really afford to slack off on washing your sports bras. Those sweaty numbers need to be properly cleaned every two or three uses, at least. That should reduce the likelihood of any red bumps rudely showing up without an invite.

WebMD names clothing as one of the top things in our lives that cause serious skin irritation. Sometimes it's because the garments don't fit properly, and sometimes it's because they're not washed often enough. Dr. Zeichner told Buzzfeed Life that it's very easy for bacteria and yeast to gather underneath your breasts, which is an area they find to be moist and cozy.

That yeast and bacteria might result in a pink patch where the skin becomes raw, leading to redness and irritation (which can be cured in a day or two), a rash, or an infection. An infection would probably send you to a doctor, where you may have to get prescription meds to zap the problem.

I wouldn't wish chafed nipples on my worst enemies. It's an incredibly uncomfortable thing to endure, and one of the causes? You guessed it: unwashed bras. Boston-based dermatologist Robin Travers, M.D., told Fitness Magazine that the recipe for chafing is a sweaty undergarment and dry skin. Even the smallest amount of moisture that gets trapped between dirty fabrics and delicate skin can turn your nipple area into a danger zone.

Your nipples definitely don't have the time or energy to deal with that nonsense. To keep your boobs happy — and your sanity intact — set an alarm on your phone to remind yourself to cart your bras to a washing machine at least once a week. If you're in a pinch, hand wash them and leave them out to dry overnight. Because nothing gross ever came out of a clean brassiere. (Well, OK, maybe that one hookup you had with a clean bra on was pretty gross, but you know what I mean.)