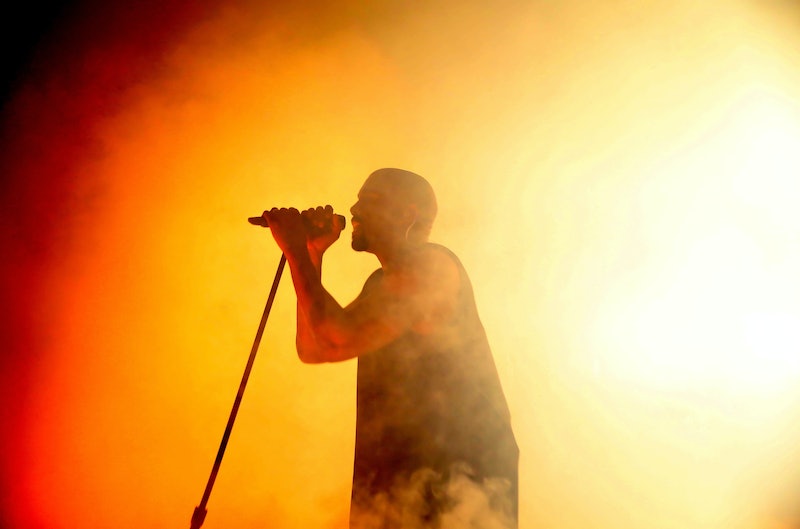 You can accuse Kanye West of being many things, but the one thing that you shouldn't accuse him of is being boring. West has the ability to grab everyone's attention with one tweet (though, sometimes, he doesn't do this in the best way) and now, he's doing it again about his new album. Days after revealing that the album formerly known as So Help Me God formerly known as SWISH formerly known as WAVES would now be titledT.L.O.P. — and challenging the Internet to figure out what T.L.O.P. stood for — West took to Twitter to reveal exactly what T.L.O.P. means. Specifically, West tweeted a photo with a track list for the album titled The Life Of Pablo, which is making the Internet ask one serious question: Who is this "Pablo" in Kanye West's album title?

Fortunately, unlike that time he asked us to figure out what T.L.O.P. means, West may have given us a few clues to his possible identity.

While there are a ton of theories as to whom this mysterious man may be, there's a chance that West was talking about himself — or, rather, himself as a famous artist. In a speech at the Oxford Guild Society at the Oxford University Museum of Natural History in March 2015, West stated that, had he pursued his original dream of "fine art," he would have wanted to become "Picasso or greater." West was referring to artist Pablo Picasso — so, with this title, West might be referencing himself through the lens of this artist.

On the other hand, there's also the chance that West could be referring to Pablo Escobar, the drug lord whose life was recently dramatized in Netflix's series Narcos. Considering that the show hit Netflix while West was working on his album, it makes sense that some Twitter users thought that West might be referring to this iconic figure:

Supporting either of these theories is the fact that West references someone named Pablo on his track "No More Parties In L.A." (which is sadly no longer included on the album, judging by the album tracklist he shared). Here's where Pablo is mentioned in the song:

The song could be referring to either infamous Pablo — though, personally I feel if it's between the two above options, it is far more likely that the song refers to the drug lord rather than the artist, who was born in 1881, due to the line "when I see me on the news." (Sure, he did die at the age of 91 in 1973, but he probably wasn't making many news appearances.)

Then, there's the idea that Pablo could refer to someone who isn't a household name: As in, The teen who "foreshadowed" West's decision to run for President during the 2015 MTV VMAs. As you can see in the below video, teenager Pablo Chacon suggested during the awards show that West should declare his candidacy — just seconds before West actually did so. Maybe West wanted to give his big fan a shout out?

Only time will tell who this album title is really referring to. But, for now, let's keep an eye out for even more cryptic tweets from West — because you know that they're coming.

More like this
Cardi B’s New Single “Hot Shit” Features Kanye
By Alyssa Lapid
Adele Says It Would Be “Wonderful” To Have Kids With Boyfriend Rich Paul
By Jake Viswanath
Rihanna Is America's Youngest Self-Made Woman Billionaire, According To 'Forbes'
By Hugh McIntyre
Britney Spears’ Honeymoon Plans Include Watching This Movie With Her Husband
By Grace Wehniainen
Get Even More From Bustle — Sign Up For The Newsletter