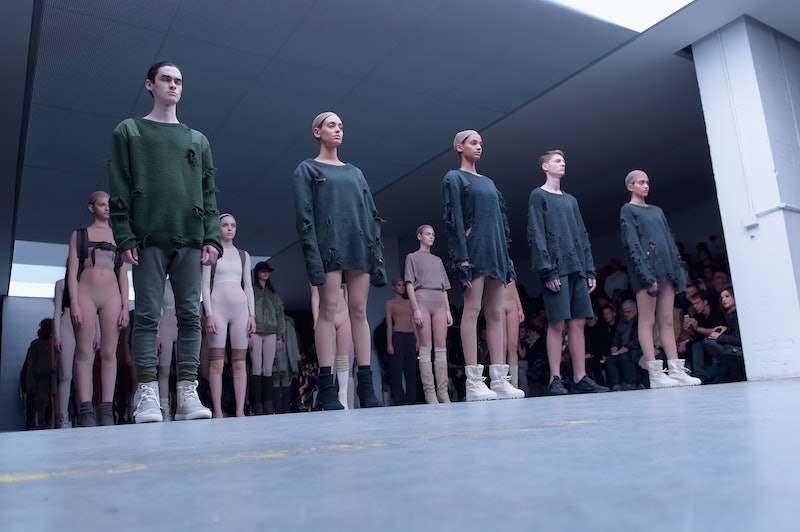 Leave it to Kanye West to decide to show his Yeezy Season 3 collection in one of the biggest concert venues in the country while also performing his newest album, The Life of Pablo, for the first time ever. He even sold tickets to this concert / fashion show. Because let's be real, why wouldn't he? But if you don't live in New York, or weren't lucky enough to get tickets, you can livestream the Yeezy Season 3 show on Tidal.

Tidal, Jay-z's streaming service, has been getting a lot of attention recently, as it has become the go-to platform for hip-hop, R&B, and pop artists like Rihanna and Beyonce to release new music. In fact, Tidal is where Rihanna released her ANTI album before it went live anywhere else, and it was also where Beyonce released the brilliant video for her new hit "Formation." It only makes sense that Kanye would release his music here as well, in an attempt to add some additional legitimacy to the platform.

Knowing Kanye, the quality of the stream and the production will presumably be amazing. And luckily, even if you aren't a Tidal subscriber, you can still stream Kayne's Yeezy Season 3 show on Tidal's homepage starting at 4 p.m. EST on Thursday, Feb. 11. I'm sure it will be amazing.

If Yeezy Season 3 is anything like his past collections, it will probably be a selection of highly priced baggy sweatshirts that somehow still look cool.

No word yet as to whether West's sister-in-law Kylie Jenner will be in this show, although word is there is some beef between the two now that Kylie will create a line with Puma, a direct competitor of Adidas, which makes Yeezy's line.

Although the fashion show is nice, the more important part is the music. Kanye has described The Life of Pablo as "a gospel album with a whole lot of cursing on it." Sounds promising to me!

Here are some other sneak peeks Yeezus gave us on Twitter:

I'm going to guess that this is what Kim K. is going to show up in!

Sweats and new kicks — now that's what Yeezy fans are looking for!

This is a much more exciting print for a sweater than we've previously seen.

More like this
Kim Kardashian Pays Homage To Kanye West’s Fave Film In New Swimwear Pics
By Bustle Editors and Maxine Harrison
Are John Legend & Kanye West Still Friends? The Singer’s Latest Update Is Candid
By Brad Witter
Most Comfortable Underwear For Big Butts
By Audrey Williams
The 11 Best Front Closure Bras For Big Boobs
By Maria Cassano
Get Even More From Bustle — Sign Up For The Newsletter