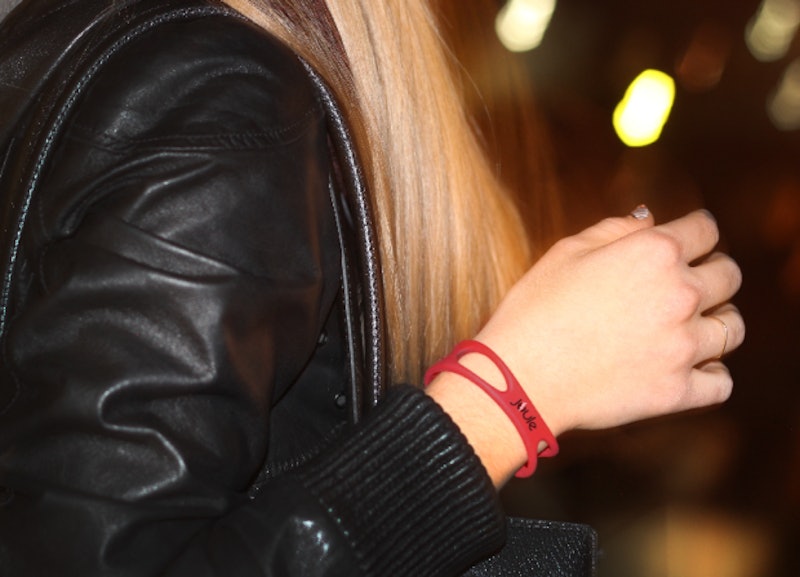 You know how you're sometimes just living your human life when your credit card bill comes in and you realize you've spent enough on coffee to make a down payment on a small home in the suburbs? Now that the Joule caffeine bracelet exists, you'll be able to cut your crazy coffee budget once and for all. If this sounds like some beautiful caffeinated science fiction nonsense, then sit yourself down and prepare to get learnt on this magical bracelet. You swap out patches on the bracelet every day, and each patch distributes about a cup of coffee's worth of caffeine into your human self. Weird as it sounds, it actually works using transdermal administration the same way a nicotine patch would. And the best part? Instead of resulting in that post-coffee crash you usually have mid-morning, the bracelet regulates your caffeine consumption evenly over the course of four hours, giving you that slow and steady descent that the weird passengers on flights always clap at the end of.

The Joule Starter Kit retails for $29 dollars, so let's do some math here. I personally have managed to avoid this plight, but I know a lot of y'all (no judgment) spend about that much getting fancy coffee every morning. So really this bracelet is an investment in your future caffeination, fellow humans. Of course, the patches cost money to replace, but overall it would come to a little more than a dollar a day — a massive relief from the usual decimation of your bank account.

Also consider the other perks: it won't have you running to the bathroom every 15 minutes (#guilty), it won't be acidic on your stomach, and it won't yellow your teeth the way coffee does. Plus you won't be holding a fist up to your vengeful gods every time you open the office fridge and see that someone finished off the last of the milk you typically drown your coffee products in. And the creators point out the other main draw: the ability to multi-task while getting your caffeine on. Now you can run on the treadmill, type without the ever present fear of destroying your computer by tipping your mug over, and get on the subway without hoping you don't accidentally scald any innocent humans in your five foot radius if someone bumps into you. Everybody wins!

Right now the Joule bracelet comes in black, pink, and blue, and are available for preorder on Joule's Indiegogo page. Word to the wise: the bracelets won't be ready to ship until July, so until then you and your bladder are just going to have to hope it's well worth the wait.

More like this
The 7 Best Knee Sleeves, According To An Expert
By Andrea Hannah
The 6 Best Hydro Flask Alternatives
By Maria Cassano
The Best Underwear For Sensitive Skin, According To A Dermatologist
By Alexa Vazquez
Is The Insta-Famous Always Pan Actually Worth It?
By Jessica Goodman
Get Even More From Bustle — Sign Up For The Newsletter