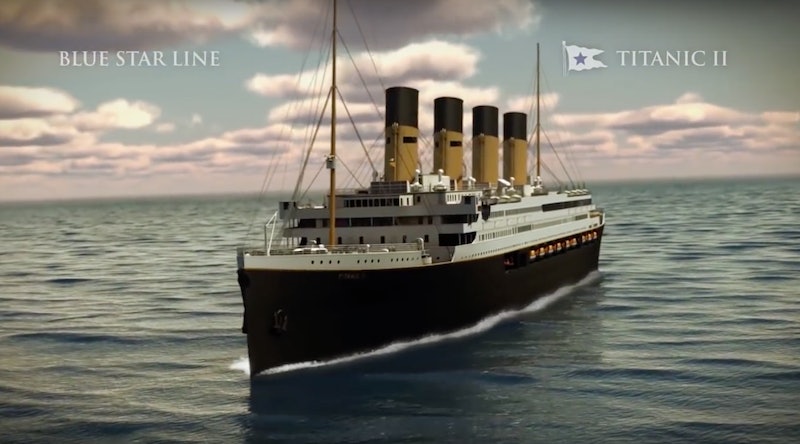 While many of us can only associate Titanic with the iconic, high-grossing, tear-jerking film, we tend to forget that it was an actual historical tragedy that happened in real life. The event caused national headlines, inspiring people like myself to never step foot on a cruise ship and inspiring others to build a live replica of the Titanic. Back when the original one was built, thousands of people worked on building the "unsinkable" ship to find that it was actually very much sinkable. I guess they decided to give it another shot, because the project to recreate it is slated to be finished in 2018. Lucky for us, technology and history has helped make this ship a lot more safe for passengers.

One of the biggest concerns I had when first hearing about this project was how they would handle the lack of lifeboats on the original ship. It seems like the design team had the same idea, because they are making this replica wider and able to hold more lifeboats. If you recall in the movie, the designer of the ship made a comment to Rose saying that he was told his design would ruin the views for first class passengers which is why there were not enough boats when Titanic sank. Thankfully nobody is so particular about their views on this version, as long as they can stay above water. And rightfully so — over 1,500 people perished in April of 1912 when the original ship sank.

Would I ever go on this ship? Maybe. If someone paid me money I would consider it. Otherwise, I just feel like we're tempting fate. My opinion seems to be in the minority, because the creator claimed that people have already offered to pay a million dollars a ticket for a chance to experience the Titanic voyage. Hey, if you have money I see no reason why you wouldn't spend it on something like this. Personally, I'd buy a small pet monkey, but you do you, rich people!

Just look at the space required to assemble a giant like the Titanic! That is mind blowing to me. The amount of people working on putting together the gargantuan ship would make even James Cameron proud. The idea was first presented a hundred years after the sinking of the original, and was slated to be completed this year. Looks like they were set aback by a few things, but Titanic's recreation is going to be finished by 2018. Not bad.

The announcement came with a few details that had me scratching my head. I'm not sure how I feel about the ship's stance on keeping the passengers in different classes. There are examples of what first class dining would look like above, I'm just not sure if that means only first class passengers would get to visit it. Hopefully not! Either way, we live in an exciting time. If you want to check out the full announcement video, it is included below!