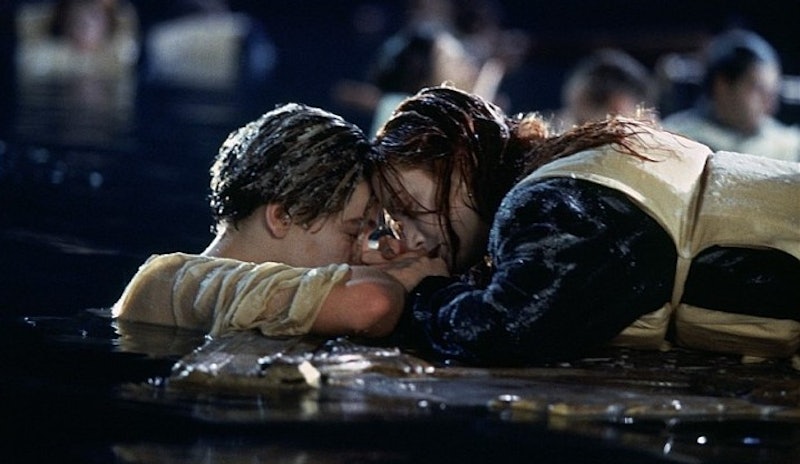 Quick: What was the biggest film of the '90s? Obviously, the answer is Titanic , and the competition is not even close. Released in 1997 (almost twenty years ago, gulp), Titanic reached an amount of success that no other film had ever neared before, and that not really any have achieved since. Not only was it the highest grossing film of all-time for twelve years, it was also the first movie to make a billion dollars at the worldwide box office — a feat that wouldn't be matched until The Lord of the Rings: Return of the King did it six years later. The movie was also a huge critical success, tying the record for Oscar nominations (14) and Oscar wins (11), both records that still stand unbroken. But for all its success, Titanic still has some major plot holes.

And that's to be expected, really. I mean, the film has a runtime of 195 minutes. The home VHS release split the film into two tapes for God's sake. Two tapes! Of course there are going to be a few mistakes that slipped through the cracks and some scenes that just don't add up. It's not perfect. So here they are, seven holes in Titanic's plot that are bigger than the one made by the iceberg.

1. How Did Brock Lovett Get The Safe?

Cal's safe is discovered by a small robot in a difficult to reach section of the Titanic wreck... so how was Lovett's crew able to bring it on board the Akademik Mstislav Keldysh?

While telling her story, Rose claims the only time she ever wore the Heart of the Ocean necklace was when Jack painted her, but she also wore it when Cal first gave it to her.

3. How Does Rose Describe Events She Wasn't There For?

Not only does she describe Jack's Titanic ticket-winning poker game in detail (he could have told her about it, conceivably), but the movie has some scenes where neither she nor Jack are present. Therefore, I have to assume she's making up parts of her story since she couldn't remember things that she didn't witness.

4. Why Did Jack Put Rose On The Railing After She Tried To Kill Herself?

I know it's the movie's most iconic scene, and I guess you could say he's young and dumb, but bringing someone you've just met to stand on the dangerous railing where she tried to kill herself the night before seems like a bad idea.

5. Why Did Rose Believe Cal?

When Cal tells Rose he'll take Jack on a rescue boat in order to convince her to get on her own boat, why does she believe him? I know she changes her mind eventually and jumps back onto the ship, but she could have saved herself a lot of trouble by just telling him off right then and there.

6. Why Did None Of Rose's Family Find Her?

After the Titanic sinks, Rose adopts Jack's last name of Dawson and starts a new life, but why wouldn't her mother or Cal have tracked her down? They would have been eager to find her, and probably would have recognized her first name with Jack's last name on the list of survivors. Also, she became a successful actress, meaning that she apparently achieved some level of fame. So how did she remain hidden?

Here's the big one that everyone always talks about: There was room for two people on that piece of wood Rose was floating on, so why didn't Jack climb on board? This will never not bother me. I'll never let go.

In spite of these flaws, Titanic remains a great and iconic movie... except for that last unforgivable error at the end. Why didn't you move over, Rose?! Why?!