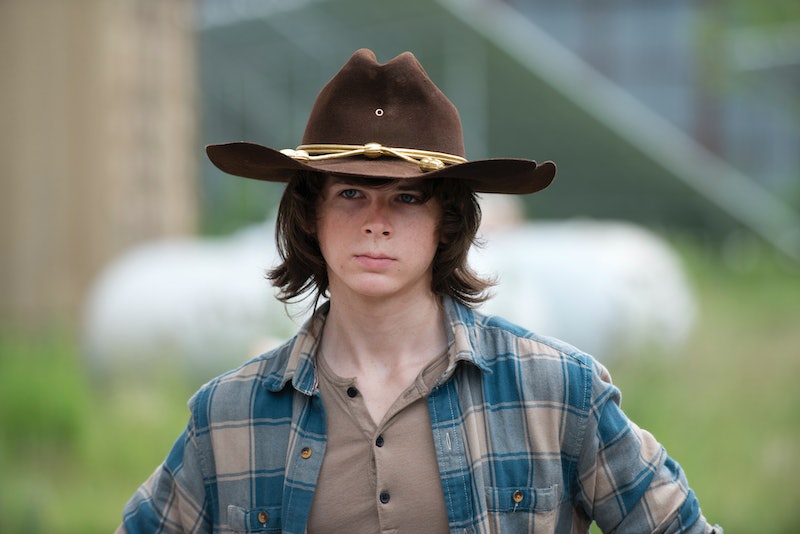 The zombie-infested world of AMC's The Walking Dead is so deadly that the show has one of the highest turnover rates on television amongst its sprawling main cast. Can you believe that, of all the characters we met in the first season, only five remain? That core group is Rick Grimes, Glenn Rhee (who we almost lost a few episodes back), Daryl Dixon, Carol, and young Carl. The deaths of any of these characters would be a huge blow to the show. So, in order to steel ourselves against any nasty surprises, let's look at Robert Kirkman's original comics series for clues to their fate — specifically Carl's. (Since he's the youngest, his death would probably hit the hardest.) What happens to Carl Grimes in The Walking Dead comics?

I have good news and bad news for you Carl fans out there. The good news is, Carl is still alive. The bad news is, he's incredibly scarred — both physically and emotionally — and is a far cry from the relatively whole and healthy version of the character we see every week on AMC. Sure, that Carl is hardened from his experiences in the outside world, and he's grown a lot from the 10-year-old we met six years ago (literally); but he's still essentially the same person… just better with a gun.

Not like the comic book version of the character, who has been through these horrific experiences:

Brothers Ben and Billy lost both of their parents to the zombie apocalypse and were afterwards adopted by Dale and Andrea. However, Ben began showing signs of being a budding psychopath, roughing up the other children and torturing animals. One day he killed his little brother, convinced that people in their world would always come back after they die. While the group discusses what to do with the young psychopath in their midst, Carl takes matters into his own hands… and shoots little Ben dead.

Obviously, this storyline was co-opted for Carol in the show, when she was forced to kill young Lizzie after she killed her little sister Mika. The show sort of made up for taking this storyline away from Carl by having the Grimes boy kill Jody instead, a young member of The Governor's raiding party who had surrendered and was lowering his weapon. But the execution of Ben was such a formational moment for Carl that the two versions of the character have never been the same since that divergence.

In the comics, Lori survives the birth of Judith that, in the show, led to her bloody and traumatic death. Happy ending, right? Not so fast. During The Governor's attack on the prison, both Lori and Judith were killed in what was one of the most shocking moments in the comic series to date. For all its brutality, the show has thus far shied away from showing the gory death of an innocent infant. (Of course, it briefly teased at such a possibility with that bloody empty car seat, but that turned out to be just another Glenn-sized red herring.) The simultaneous loss of both his mother and his sister forever changed the comics version of Carl.

An Eye For An Eye

This is the big one. In the comics, Carl has been shot twice. The first time he was shot by accident by Otis, the precipitating event that led Rick's group to Hershel's farm. Obviously, this particular event was adapted fairly faithfully to the screen back in Season 2. But Carl's second encounter with a bullet has yet to be adapted — and it's the single biggest turning point for the character in the comics.

During the zombie attack on Alexandria (which is right where we left the show at the midseason finale), Carl is shot by the town's leader, Douglas Monroe (Deanna on the show) as he fires erratically at the invading walkers. The bullet goes straight through Carl's face, taking one of his eyes and a large chunk of his cheek with it. Denise is able to save Carl's life, but from there on out he young boy is permanently scarred and always sports a badass eyepatch.

Douglas' bullet does more than simply take Carl's eye; it also seems to take part of his soul. After recovering from his massive wound, the boy is never quite the same. He wakes up with a decidedly more negative outlook on life, replacing the childish optimism that had defined the character up to that point. He also clashes much more frequently with his father, blaming Rick for many of the terrible things that happen to their group. For most of the show's lifespan thus far, Rick and Carl have been a fairly inseparable unit, so it would be interesting to see the writers explore a more fractured version of this central relationship.

We already know we'll finally be meeting Negan, one of the comic's biggest baddest villains, in the Season 6 finale (played by Jeffrey Dean Morgan). What you don't know — unless you've read the comics — is the odd relationship that grows between the baseball bat-wielding bad guy and young Carl. Angered when Negan kills a member of their group (whose identity I won't spoil here), Carl retaliates by hiding in Negan's truck and later ambushing his men, killing several before being subdued. But instead of executing Carl, Negan takes a liking to the young boy's fiery spirit and starts trying to groom him to be his murderous second-in-command. Of course, Negan's efforts don't take and Carl ends up trying to kill Negan, but it's an interesting dynamic while it lasts.

With his relationship with his father so damaged, Carl asks permission to leave Alexandria and move to the Hilltop Colony, another safe zone about 20 miles away. There he plans to apprentice with the town's blacksmith in order to become a productive member of their little society. However, the traumatized young man doesn't exactly fit in with the other children there and, in one instance, savagely beats a couple of boys with a shovel, almost killing them. Carl is placed in the town's jail, where he meets another prisoner, a girl named Lydia.

It turns out that Lydia is a member of another group of survivors called The Whisperers, and nobody at the Hilltop trusts her. But she and Carl quickly bond… and eventually he loses his virginity to her after she tells him his missing eye is sexy and seduces him. But when The Whisperers, led by Lydia's mom, show up demanding her return, the Hilltop people release her against Carl's objections. So he sneaks out of the colony in pursuit of his crush. (Obviously, there's no Lydia on the show yet; could they be grooming Enid to take her place?)

Will Judith die? Will Carl lose an eye? Will he have an unexpected romantic encounter? Find out when The Walking Dead returns from its midseason hiatus this Sunday, Feb. 14. Happy Valentine's Day!