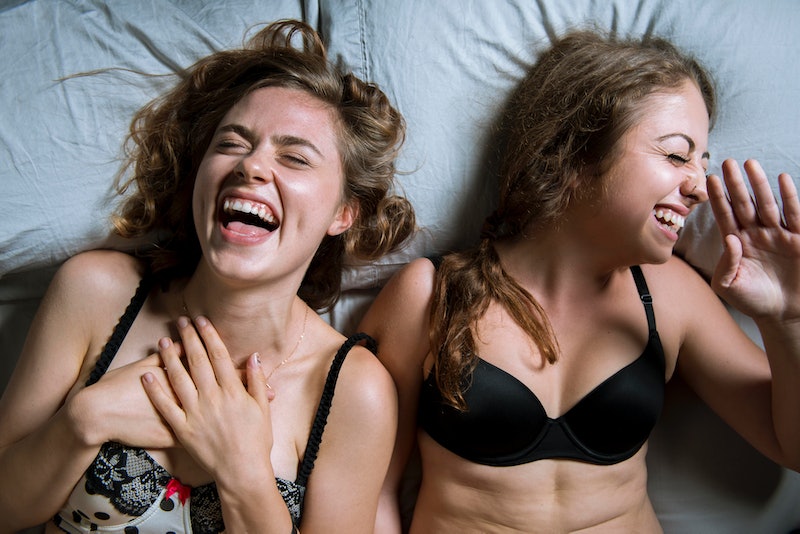 If you (along with the rest of the Internet) are a fan of interactive documentary The And, it's your lucky day. The And 's recent "Blind Date" video continues the tradition of painful intimacy that makes the series so darn addicting — although this time, the intimacy is between total strangers. In the latest installment, filmmakers asked people who'd never met before to sit across a table from each other and describe, in just five words, what they imagined sex with each other would be like.

Needless to say, most participants exploded into awkward giggles or groans at the question, but anyone who's familiar with the documentary knows that such seemingly-invasive topics are typical. Produced by publishing collective The Skin Deep, The And's mission is to bring the viewer into the "emotional space of real couples" by giving participants a list of difficult questions and filming the candid discussions that follow, no matter where they wander. The ongoing documentary's often-brutal honesty largely owes itself to the fact that the subjects are usually couples or exes, but recently, it's expanded to total strangers with its "Blind Date" series.

The first "Blind Date" clip certainly doesn't hold back: In the video, participants ask each other to describe what they think sex together would be like in five words. Once the initial weirdness is over, which (understandably) takes a while, participants' responses range from the adorable to the cringeworthy. Let's take a look at some of the more notable ones below:

Prepare yourself — some couples have more chemistry than others, but these two seem to hit it off almost immediately. In this case, the guy thinks sex together would be "crazy," while the woman imagines it would be "spontaneous." If you're not secretly rooting for them to get together by the end of the video, you're lying to yourself.

Other couples, however, are rather less into each other. Although the woman imagines sex would be intense, the man simply describes it as "clean." That's... nice?

The video doesn't include what the guy had to say about their hypothetical sex life, but judging from the woman's assessment that it would be awkward, they didn't have much chemistry.

"Because of me, or because of you?" the woman asks when her scene partner says the sex would be conservative. Good question.

This assessment was a cute thought — but apparently, it was completely off the mark, because the man's blind date emphatically responds, "I hate cuddling."

The video concludes with a montage of almost everyone imagining it would be fun — either the participants are a particularly goofy group, or sex with a stranger is a more enjoyable prospect than they anticipated at first. Check out the video below: