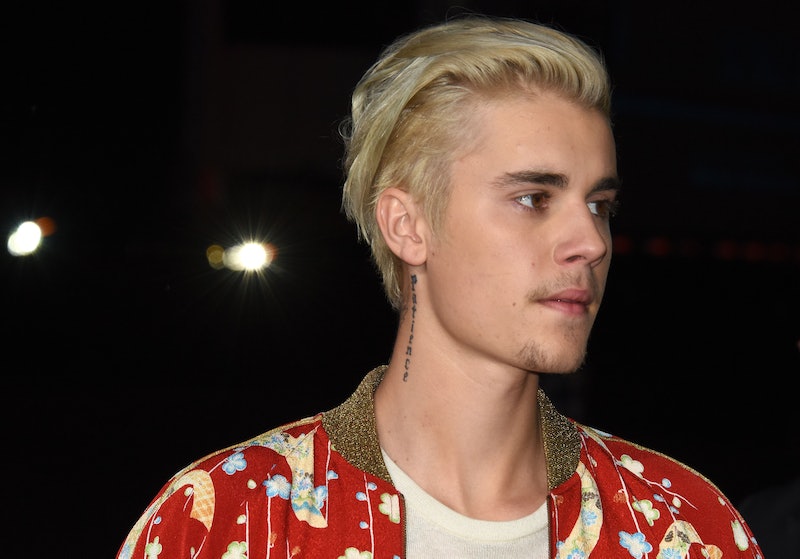 After being obliterated by countless bullets fired from a machine gun, "Sorry" singer Justin Bieber died over the weekend. That is, he died on screen in Zoolander 2, capturing his last living moments with a Blue Steel pose and a selfie. But during the 2016 Grammy Awards Justin Bieber was alive and well, performing "Where Are Ü Now" with fellow artists Diplo and Skrillex on stage at the 58th annual award show. It's the first time the threesome performed the song on television, and the song itself, off of Bieber's Purpose album, is nominated for Best Dance Recording. Before the show even began, Skrillex and Diplo won Best Dance/Electronic Album for Skrillex And Diplo Present Jack Ü. But "Where Are Ü Now" wasn't the only track the artist delighted fans with. To everyone's surprise, Justin Bieber performed "Love Yourself" before the trio got together.

Wearing a backwards cap and leather print jacket, he started off his appearance with a surprise performance of "Love Yourself" on an acoustic guitar. The singer, who was sporting just a teeny bit of facial hair to match his blonde 'do, was mellow and calm during the performance. But the song was barely recognizable and hugely different from the radio version of the song. Sure, it's one of the slower tracks Bieber has recorded, but the Grammys version of the song, with only Bieber's vocals and a few strums on the guitar threw me for a second. Justin Bieber, is that you?

Regardless, Biebers gonna Bieb, and there's no arguing that Purpose is full of performance-worthy tracks. "What Do You Mean," "Sorry," "I'll Show You," and others have all spent some time on the iTunes charts, as well as "Where Are Ü Now" and "Love Yourself" of course.