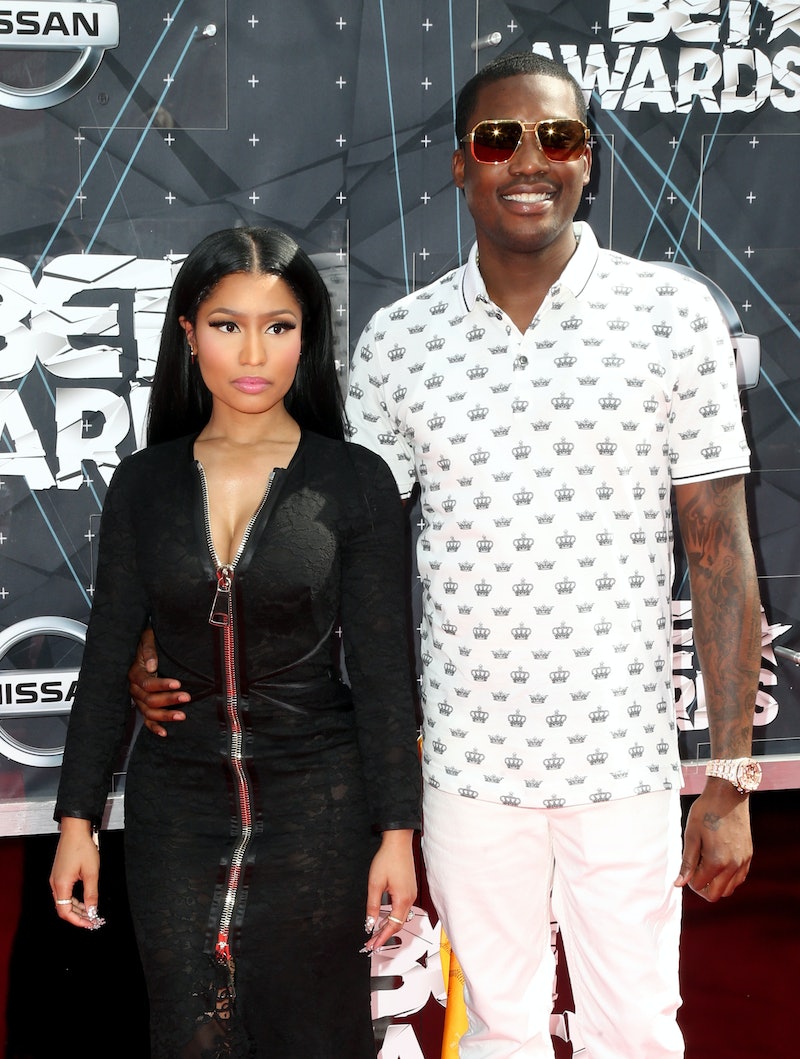 Nicki Minaj has never been shy about expressing her feelings in her song lyrics and on her Twitter account when interacting with her legions of fans, so it's not totally surprising that fans want to know about her dating life. Minaj herself told GQ that she's only had three boyfriends, saying, "I've never dated around… I don't have a whole lot of experience in that department." So, suffice it to say that when rumors started to fly in December 2014 that she was dating rapper Meek Mill, everyone wanted to know what was up. The two are now in a confirmed relationship, and possibly already engaged, but one question still remains: when did Minaj and Mill start dating?

The answer isn't a simple one, unfortunately. The couple gave their first-ever joint interview to GQ last September, and they got real about a lot of stuff, including their romance. Minaj revealed that she had been thinking about him just prior to his jail sentence for a probation violation, in the summer of 2014. She said,

He was on my mind the day before, because I saw him going off on Twitter, and I was like, "oh man, he needs somebody to, like, make him feel good right now." So when I heard he went to jail I was really disappointed. I reached out to his people like, "yo, let him know I'm praying for him to come home." And they told him, and he asked them to call me for him. And it was like, I remember sitting on my balcony at my house and just being on the phone with him until it started getting dark outside. And I was just like, "yo, I'm in trouble." I just knew that first day. It was that long conversation. I was like uh-oh.

The two didn't have an exact date for when their relationship began to blossom, but Minaj said at the time, "About a year ago or something like that? I can't say for sure. Maybe a year and change." Though apparently their romance was in the works for a long time, since Mill was tweeting about her for five years! Mill said, "I could've picked a lot of rappers to tweet about. I have a whole rap about her. The entire city of Philadelphia knows it. If she were performing there by herself, they would sing it to her."

Aw! As for whether they actually are getting married anytime soon, Minaj has said that they'll officially be engaged once she has not one, but three rings. She told Billboard in December, "He and I are not engaged. But he said he would like to give me three rings before we get married." We know that she has two rings so far, so it could be wedding bells for these two soon!