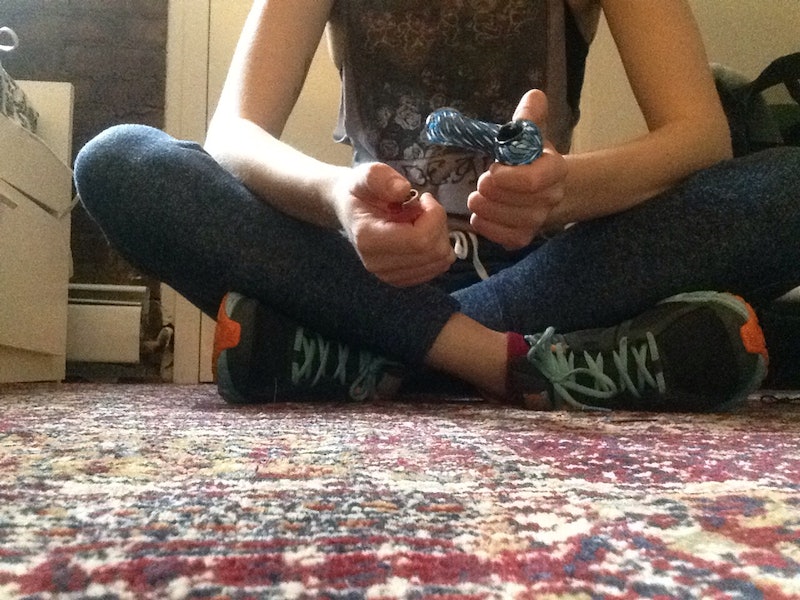 If you regularly work out and you're also a fan of marijuana, then you likely already know what it's like to go to the gym high. But if you've never done this, and smoking marijuana doesn't generally make you feel super paranoid or sick in any way, then you might be interested to know that it can actually be a pretty chill way to get your fitness on. At the risk of sounding like a complete and total Stoner Babe, in my experience, working out while high couldn't be more fun. (And yes, I really did just write "working out" and "fun" in the same sentence.)

Since I started smoking weed back in my junior year of college, I've gone on more high walks than I can count, and I've also gone to the gym a few hours after getting high. But until recently, I'd never gotten high immediately before a workout. I always assumed that going to the gym high would affect my performance and/or focus, and make me super self-conscious. Surprisingly, I was wrong about all of that. When I went to the gym high, not only was my workout way more fun than normal, but it was also more productive.

Here are 13 things that happened when I hit the gym while stoned.

1. I Actually Enjoyed The Journey To The Gym

Usually, getting to and from the gym is my least favorite part of the whole experience. I either have to walk about 20 minutes from where I live in Bed-Stuy to the gym I belong to in Bushwick, or I have to do a mixture of walking, waiting for the train, taking the train, and then a bit more walking. It's not really that big of an inconvenience, but since it's been cold AF lately, going outside at all is rough.

But when I got high before hitting the gym, I was happy to discover that it made my commute way more pleasant than usual. Not only was the cold was more bearable, but I actually kind of enjoyed it. At one point, I may or may not have exclaimed (to no one in particular), "I feel so alive!" as I made my way to the train.

2. I Was Less Self-Conscious

This probably shocked me more than anything else. I mean, when I first got to the gym, I was concerned that the other girls in the locker room would be able to tell that I was high. But almost immediately after I had that thought, I decided that I didn't care if they could tell. From there on out, I was actually way less self-conscious than normal.

It's weird, because I fully anticipated that going to the gym high would make me hyper-aware of the fact that I was sweating my butt off in a room full of equally sweaty strangers. But it didn't. Rather, I found myself way less concerned with what my fellow gym rats were doing than normal. It's not that I wasn't aware of my surroundings or anything; I just cared way less than I usually do about how ridiculous I must look when I'm chugging along on the elliptical.

3. I Checked My Phone Way Less Than I Usually Do

I usually check my Facebook, Twitter, Snapchat, Instagram, and Gmail way too often at the gym. When I went to the gym high, though, I only checked my Facebook twice in the whole two hours I was there, and I didn't check the other stuff at all. I found that I just really didn't want to, because I knew it would take me out of the moment.

4. I Drank More Water Than Normal

Going to the gym high made me want to drain my entire water bottle before I'd even finished with my cardio. This was largely thanks to the serious case of cotton mouth I was dealing with, but I saw it as a positive thing anyway. Often, I don't remember to drink enough water when I work out, and it usually makes me feel pretty crappy. But since my mouth was drier than normal, I couldn't have forgotten to drink enough water even if I'd wanted to.

Generally, I aim for 30 minutes of uninterrupted cardio when I go to the gym. But when I went to the gym high, I wasn't in a hurry, and I was enjoying the experience so much that I pushed myself to work out harder and longer. I'm not sure if this motivation came from how much I was enjoying my workout playlist, if it was because I was feeling extra sensitive to all the endorphins my body was releasing, or if it was because exercise has been shown to increase THC levels in the bloodstream. Whatever it was, I guess that whole stereotype that people who smoke pot are lazy is bullsh*t, huh?

6. I Really Appreciated My Workout Tunes

I always enjoy listening to music when I'm working out. In my opinion, working out sans tunes is basically just willingly putting yourself through physical pain with zero distractions. That said, working out high somehow allowed me to dig my tunes even more. It helped me to enjoy the songs I would normally skip, too.

When I work out sober, I feel like I have to listen to either fast-paced hip hop or upbeat electronica to keep myself from giving up. But when I was working out while high, I found myself just as motivated by alt-J, Banks, and Frank Ocean as I normally am by Drake and the Chainsmokers.

7. I Looked At The Gym TV Way Less

When I hit the gym sober, it's not uncommon for me to switch back and forth between checking out whatever episode of Friends TBS is replaying for the thousandth time and whatever the folks over at NY1 are talking about.

Oddly, though, working out high made me want to avoid looking at the gym TVs altogether. Just like I didn't want to check my phone for notifications nearly as much as usual, I didn't want any portion of my focus to be given to the gym's TV screens, either. In fact, I picked an elliptical machine directly in front of the window for this very reason. Which leads me to ...

8. I Looked Out The Gym's Windows Way More

Since I hit the gym during a sunny day, and I normally prefer exercising outdoors, I wanted to be able to see outside as much as possible during my workout. It wasn't as awesome as going for a long, super-high walk on a balmy sunny day, but it was pretty close.

9. I Focused On My Breathing More

I'm really bad at focusing on my breathing sometimes. When I'm particularly anxious, I'll actually start holding my breath without even realizing it. But since smoking weed chills me out and helps me to be more present, I found myself focusing on my breathing way more than I would have during a sober workout. In turn, my workout was not only more enjoyable, but it was also more mentally relaxing than usual.

10. I Smiled And Giggled Way More Than I Ever Have During A Workout

For whatever reason, working out stoned made me keep remembering randomly hilarious moments from my week. I thought about spilling water on myself during a date I'd gone on a few days before, and I proceeded to giggle about it. And when the dudes in the weight room made those constipated faces that all dudes make when they're lifting, I couldn't help but chuckle a little bit then, too.

I mean, I wasn't laughing like a maniac or anything. That would be rude. But the fact that I smiled and giggled during a workout at all is saying something.

11. I Pushed Myself To Do Extra Reps

I don't know if this was because I simply wasn't in as much of a hurry as I would have been if I were working out sober, or if it's because being high just makes you feel good, but being high definitely made me want to strength train for longer than normal. I ended up doing twice the number of reps for both my arm and butt exercises.

12. I Actually Took The Time To Stretch Afterwards

When I work out sober, I frequently skip cooling down at the gym. I know this is a bad idea, but since I have a yoga mat at home, I usually just stretch there. When I worked out high, though, I took the time to stretch at the gym after my workout. I'm really glad I did, because it felt awesome, and when I got home, I didn't have to worry about doing my stretches.

13. I Felt Less Sore Post-Workout Than I Expected To

Considering how working out high pushed me to exercise harder and longer than I would have for a standard gym session, I fully expected to be pretty sore afterwards. Fortunately, I was wrong. I don't know if it was because I drank more water than normal while I was working out, or if it was the stretching afterwards, or just the cannabis coursing through my body, but even hours after my workout my muscles still felt relaxed.

Clearly, for me, getting high before working out improved both my entire experience and my overall performance — so much so that I think I'm going to have to start doing it at least once a week. And if weed were cheaper, I'd probably do this all the time, to be honest.