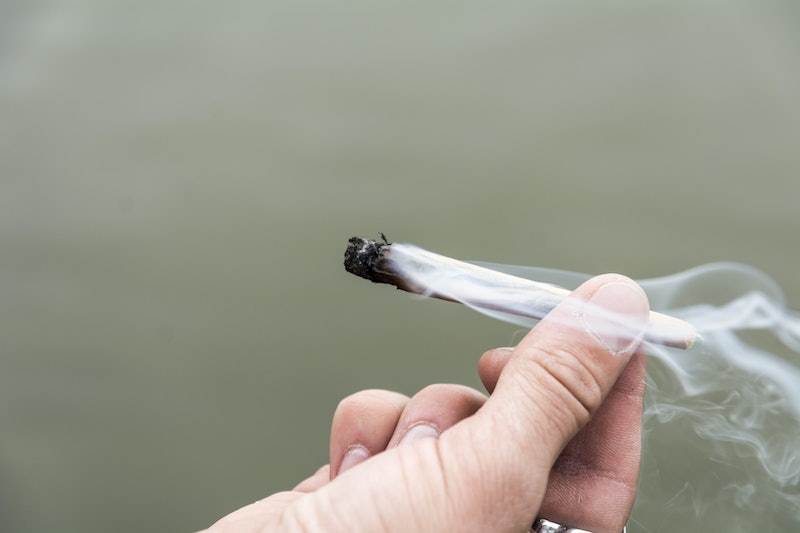 Luckily, the mental image most people have of someone who smokes weed has changed significantly over the past few years. We used to only associate marijuana with the dopey stoner dude who sleeps in until noon and only eats things that come out of a crinkly bag, but our view has definitely expanded. For one, we're now more used to the fact that many women like to get high, too. More and more famous women on social media accounts are proud, responsible marijuana users — and not a single one of them resemble Sean Penn in Fast Times at Ridgemont High.

It also helps that women are at the forefront of the marijuana conversation more than ever before. Organizations like Moms for Marijuana are coming forward to advocate for decriminalization. Female activists are fighting for marijuana rights in their local communities. You could argue that women hold the key to marijuana becoming legalized and widely accepted.

But even with all the recent developments, there's still some stigma attached to the everyday woman who smokes pot. For those of us who do prefer weed, we hear these cliches on the regular and can't help but laugh, because so many of them couldn't be farther from the truth. It's only a matter of time before they die off, though, so in the meantime, we just keep Mary Jane by our sides and brush it off.

Here are eight myths about women who smoke marijuana.

1. They're Not Very Successful

We're used to seeing stoners in movies who are so consumed with their love for pot that they can't make it to a job interview, so many people automatically assume that a woman who likes weed also must have problems with ambition. Quite the contrary; there are so many accomplished women out there, women who have their lives in order, who enjoy lighting up a joint at night.

We never make it to happy hour, right, because we just prefer to stay at home and get high? This particular assumption about pot-smoking women annoys me the most. Just because we like our marijuana doesn't mean we're inherently anti-social individuals. We can just as easily toss on our high heels and cat eyeliner as we can sit back, roll a joint, and chill. For some of us, weed even makes us more social.

3. All Of Their Friends Are Stoners Too

As fun as it is to enjoy marijuana in a group of our besties, it's not likely the glue that holds girlfriends together. We didn't all start smoking pot because our friends pressured us into it, either. It's an activity we're perfectly capable of doing on our own, in the privacy of our own home, with or without a stoner posse.

4. They Only Date People Who Smoke Weed

My partner, who has been in my life for a few years, hasn't smoked marijuana in over a decade; it's just not his thing anymore (he gets adorably paranoid). From the very beginning, though, he knew I was still into it, and he never cared. There are plenty of nights when I smoke right next to him as we cuddle up to watch a movie, and this kind of relationship is not so unusual. Whether our SO smokes weed is not necessarily a dealbreaker for us, and we definitely don't need their approval.

Yes: some moms smoke pot — and that doesn't make them irresponsible parents. Thankfully, we've been moving away from the stereotype that marijuana is reserved for college kids, but we have yet to fully accept that our idea of the traditional grown-up might want to get in on the action too. Hopefully we'll see more moms in the near future come forward and speak honestly about their healthy relationship with marijuana.

We know there's more to life than pot. We don't need you to tell us. Also, we probably don't wake and bake nearly as often as you think we do.

I've met so many women in my lifetime who love pot, but who are also only occasional smokers. They may light up a couple times a month, or even just a couple times a year. There is plenty of middle ground between smoking morning, day, and night, and never touching the stuff at all.

7. They Started Smoking As Teens

Because of the recent decriminalization of marijuana in several states, a lot more people are picking it up in their adult years for the first time. It may be weird to picture a 40-something professional (like your boss) trying it, but don't write the idea off so quickly. Teenagers are no longer the only ones experimenting with weed; the sooner we're OK with that fact, the less shocked we'll be when we witness it in action.

8. They're Probably Going Through A Tough Time

When a dude sits back and gets high, we hardly think anything of it, other than he must be a really chill dude. But there is still stigma around a woman doing the same thing; people think there's some deep sadness she's trying to bury and they feel sorry for her.

The girl probably just wants to get high, y'all! Happy women are just as likely to reach for pot as anybody else, and we shouldn't portray them as sob stories. Most of us happen to be having a great time, thanks.