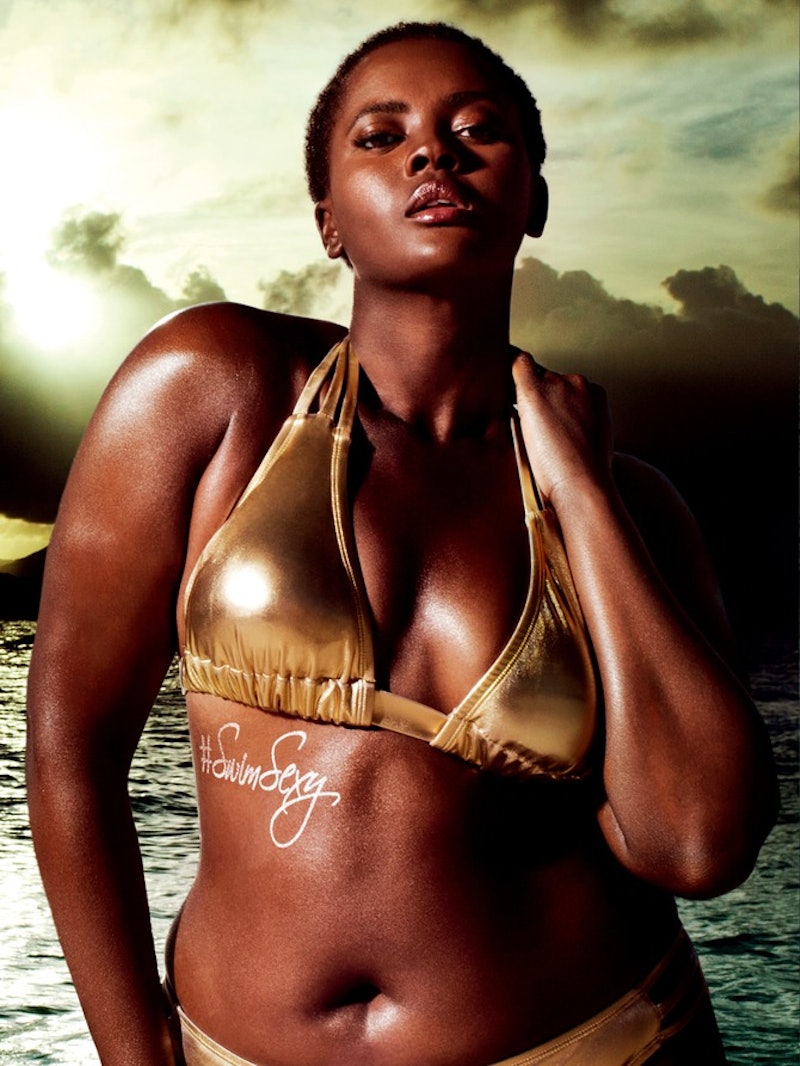 In Feb. 2015, I gazed upon an image of the babe-ly Ashley Graham in a low-rise string bikini, a suited dude sporting a coiffed blonde mane swooning so hard over her that his body couldn't help but propel backwards over a pool as he made a "yaaaas" kind of face. I didn't realize it immediately, but the image was a swimsuitsforall ad in Sports Illustrated . In that same Swimsuit Edition of the publication, plus size model Robyn Lawley starred in an editorial, making her the first curvy model to land one of the most coveted gigs the modeling industry has to offer. And while neither Graham nor Lawley are what many of us might envision when we think "plus size," both women broke the size 2 mold Sports Illustrated has arguably been known for since its first swimsuit issue in 1964.

But this year, the publication is taking things even further. In 2016, Ashley Graham is a cover girl. And in 2016, Graham and a couple of other body positive models have landed another swimsuitsforall ad campaign.

The swimsuitsforall #SwimSexy ads feature three stunning models — all of whom break certain barriers associated with "bikini bodies," and certainly with the kind of bikini bodies you might expect to see in the pages of Sports Illustrated. They are plus size model Ashley Graham, British Ghanaian model Philomena Kwao, and mature British model Nicola Griffin at 56 years old.

Historically, models have had to possess a few qualities in order to be successful. I think most of us can agree that the (very) thin, white, youthful look has long reigned. Yet here we have one of the biggest sports media franchises in the world — and a producer of the Swimsuit Edition, no less — featuring non-conventional models who prove that interpretations of beauty can be just as subjective as favorite ice cream flavors. It's a pretty big moment.

Both Graham and Kwao are curvy. Graham is undoubtedly one of the most beloved names in the plus size industry. Kwao is also a woman of color. Griffin is over 40. And all three of them are just... rule-breakers. In a world that still loves to tell us that we must be as thin as possible and as white as possible and as young-looking as possible, their presence in this publication is just the kind of thing that has the potential to spark change. If not in a macro level, than at least on an individual one.

Considering Earth's inhabitants are 50 percent female, many women are bound to pick up a copy of the 2016 Sports Illustrated Swimsuit Edition. And when they do, I hope they open up those pages to find Graham, Kwao, and Griffin. And I hope they pause to think of how stunning they all look — and how stunning they all look not "despite" being curvy or a WOC or "old." But because of these things, and so much more.

More like this
I Have Eyebrow Alopecia – & Microblading Gave Me My Confidence Back
By Jessica Morgan
The 10 Best Longline Sports Bras, According To Reviewers
By Danielle Calma
5 Best Buys From The 'Euphoria'-Approved ASOS x Adidas Collab
By El Hunt and Bustle Editors
The Nike & Jacquemus Collab May Have Been Inspired By Princess Diana
By Frances Stewart
Get Even More From Bustle — Sign Up For The Newsletter