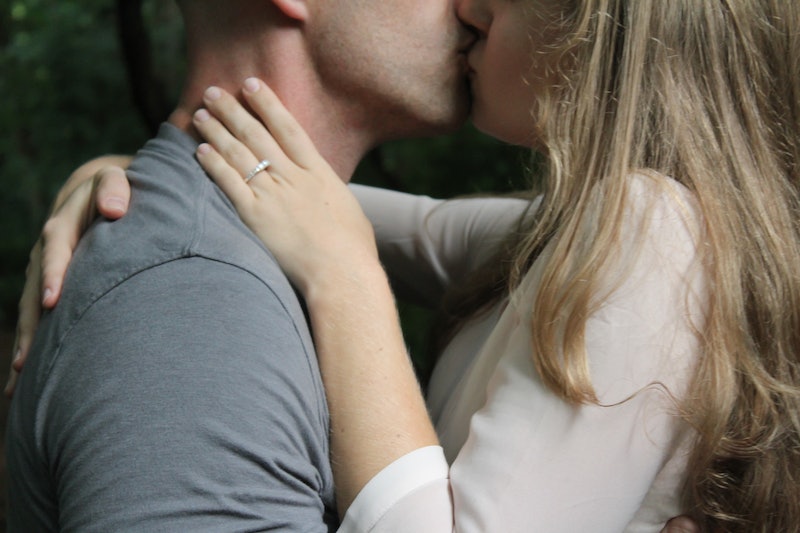 If decades of romantic comedies have taught us anything, it's that a relationship built on lies will eventually come crashing down, but there may be an exception. According to a recent episode of The Science of Us, thinking your partner is perfect could improve your relationship, even though they're undoubtedly as flawed as the rest of us (unless you're married to Beyonce — hi, Jay-Z!).

As it turns out, you don't have to literally date a perfect person; the trick is to feel like you are. Although common wisdom holds that the secret to a happy relationship lies in accepting your partner's shortcomings, be they a secret addiction to young adult dystopian lit or a predilection for showing up half an hour late with coffee, research has shown that a certain level of idealization actually makes you happier in the long run. Of course, it certainly doesn't hurt if your partner is close to perfect, but a growing number of studies show that a couple's happiness depends on how the partners view each other. If you're constantly looking for flaws, research indicates that you'll find them — but if you focus on your partner's positive attributes, you'll both be happier over the years.

In this week's episode, The Science of Us discussed a 2011 study that followed 222 couples applying for their marriage licenses in New York, asking them to fill out a survey about themselves and their partner every six months for the next three years. The survey included questions about both the ideal qualities they looked for in a partner and the qualities of their real-life partner, information which researchers used to develop a ranking of how realistic — or how idealistic — each participant's perception of their partner was.

Here's where it gets interesting: According to the study, people whose real-life partners closely mimicked their ideal partners were happier over the next few years. Let's take a closer look at some of the findings, as discussed in the video.

Putting your partner on a pedestal sounds like a recipe for disaster, but the study actually found the opposite: Partners who idealized each other were actually happier over the next few years than those who were more realistic about each other's faults.

Unfortunately, the data also indicated a decline in happiness for all couples as the years went by. However, couples with high idealization experienced a much smaller decline than realistic ones.

Although there's no way to totally conform to a partner's expectations, the video points out that positive illusions could shape someone's behavior in the long run by becoming self-fulfilling prophecies. If your partner thinks highly of you, you may end up changing yourself in small ways to live up to expectations, which in turn makes you more perfect for each other.

Of course, this doesn't apply to abusive relationships, and convincing yourself that your partner can do no wrong probably isn't healthy. However, it certainly doesn't hurt to focus on each other's positive characteristics rather than the negative ones — you'll both be happier in the long run.