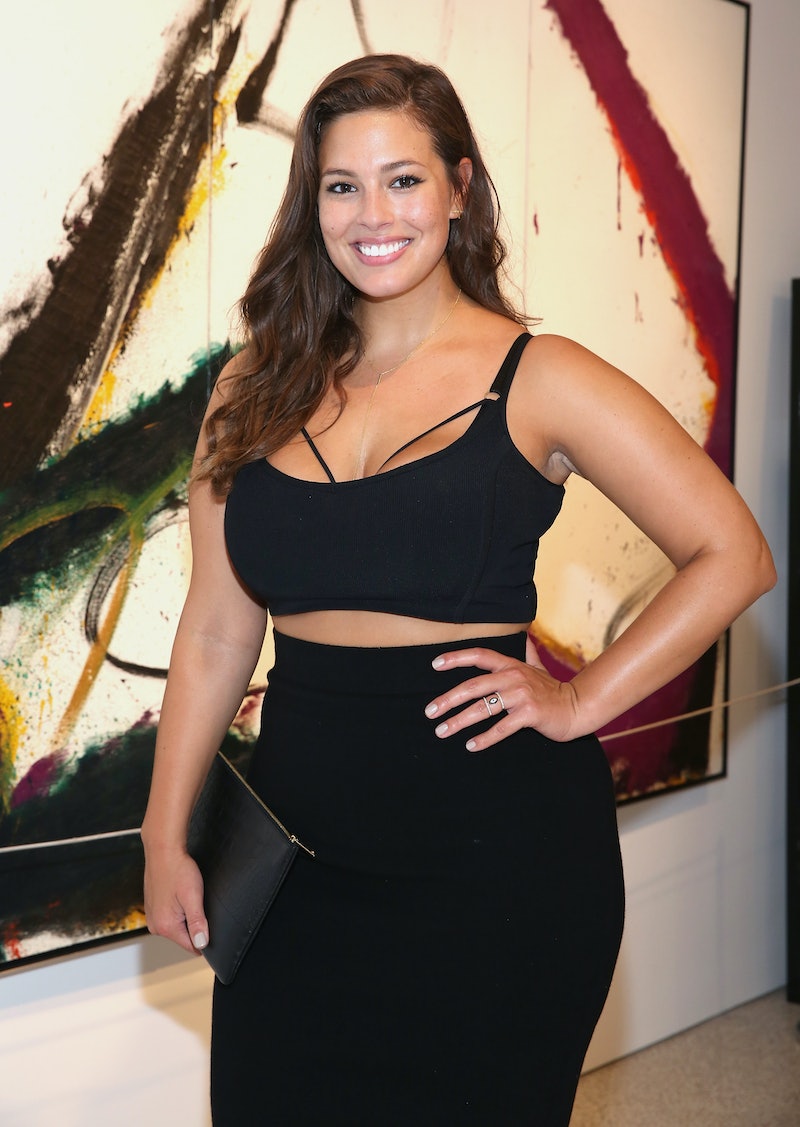 You might have heard the news by now, but Sports Illustrated took a giant leap towards diversity by mixing things up for its 2016 Sports Illustrated Swimsuit Edition. For the first time in history, the issue isn't just offering up one cover girl playing in the surf while sporting a bikini, but three. And what's so exciting about that? All three women represent different body types and unique kinds of beauty, kicking the usual one-size-fits-all standard to the curb. Not to mention the fact that swimsuitsforall's #SwimSexy ad campaign features plus size model Ashley Graham, British Ghanaian model Philomena Kwao, and mature model Nicola Griffin in the swimsuit issue's pages.

The Huffington Post reported, "For the first time in over 50 years, the highly anticipated annual issue features three women, representing three different body types. [Ashley] Graham joins American model Hailey Clauson and UFC fighter Ronda Rousey." So not only do we have a curve model on the cover in the form of Graham and a traditional straight size model with Clauson, but we also have a muscular body type repped by Rousey. That's pretty awesome.

And what's even better is the reasoning behind the model picks. Sports Illustrated assistant managing editor MJ Day explained on the publication's website, "All three women are beautiful, sexy, and strong. Beauty is not cookie cutter. Beauty is not 'one size fits all.' Beauty is all around us and that became especially obvious to me while shooting and editing this year's issue." While SI is making great strides towards diversity that other glossies arguably aren't, it could keep its efforts going strong by representing even more kinds of humans on the covers — the kinds that have been traditionally under-repped by media. Here are some examples.

While it's wonderful that Graham is a cover girl for 2016's swimsuit issue, it'd be great to push the envelope a little further and show that women who clock in on the higher end of the plus spectrum above a size 22 are equally as sexy. While curve models are becoming more popular in mainstream media, most of them still seem to hover between a 12 and 18 dress size.

While we're seeing more transgender people represented in mainstream media (think Hari Nef walking New York Fashion Week), SI could go in that same vein and add a trans woman to one of its editorials.

The fashion world painfully lacks diversity, so if SI is on a mission to fight cookie-cutter beauty standards, let's keep the ball rolling by adding more people of color. In 2014, Jezebel reported that only 9.75 percent of models walking in that year's New York Fashion week were black. The Fashion Spot also conducted a detailed survey and found that in that same year, models of color were only featured on 119 covers out of 611 total spots. Let's move past the white washing, y'all.

While the fashion world is becoming more inclusive of disabled individuals and offering some representation in national campaigns (just think of Nordstrom's catalogs or Diesel's denim campaign), non-able bodies are horrifically under-represented when it comes to shoots that amp up the sex appeal.

The fashion industry is all about that long, lanky, willowy look, but considering the fact that the entirety of the world's female population just doesn't clock in at a cool 5'10", I'd love to see some shorties mixed in with the bean poles. Some individuals feel insecure about their height (I know many women who have qualms over always being seen as "cute"), so seeing a 5'2" babe on the cover might just change that self-image right around.

6. Women Who Don't Have An Hourglass Figure

That Marilyn Monroe-esque hourglass figure is definitely making its way into glossies and advertisements more and more these days, but there are still a whole lot of other body types that deserve to be repped! We have our pear shapes, our apples, our inverted triangles, our athletic builds, and even rectangles. Seeing one of them in a bathing suit and looking stunning on a cover could help keep expanding those beauty standard boxes.

According to society, women have an expiration date when it comes to beauty, and it sets in at about the same time they get their first couple of gray hairs. To fight that standard, we need to see mature women in those same ads, editorials, and catalogs that their younger counterparts star in. That includes sporting bikinis, bras, and all.

While kudos are definitely in order for SI for this year's swimsuit issue, it'd be amazing to see the magazine push the boundaries of beauty standards forward to keep its diversity push growing.

More like this
Rita Ora’s Sheer Dress & Mermaid-Inspired Prosthetics Stun At British Fashion Awards
By Sophie McEvoy
Here’s Your Daily Horoscope for December 7, 2022
By Mecca Woods
Kim Cattrall Had A 'Sex And The City' Reunion With Creator Darren Star
By Grace Wehniainen
Singer Jenni Rivera Received Death Threats Prior To Her Tragic 2012 Plane Crash
By Brad Witter
Get Even More From Bustle — Sign Up For The Newsletter