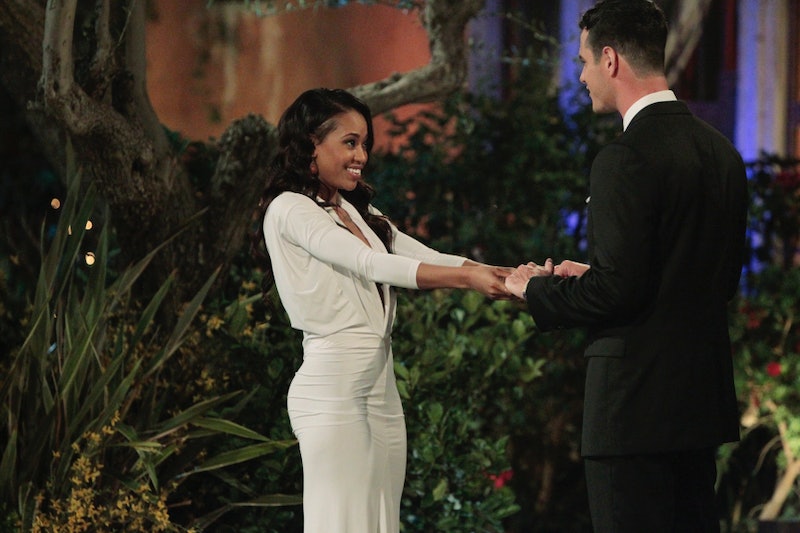 On last week’s very dramatic preview of what’s to come on The Bachelor, we heard Ben Higgins say that he sent one of the women on the show home too early. That’s right, folks — we may have a Jason “oops-I-didn’t-really-want-you” Mesnick mistake on our hands. Obviously, ABC wasn’t going to tell us in a promo one of the biggest plot point for the whole season, so I have to sit here and speculate about what woman Ben made the mistake with. And here is my theory: the woman that Ben sent home too early is Jubilee Sharpe, because she is the realest, most interesting contestant that has ever (and yes, I said ever) been on The Bachelor.

Black contestants on The Bachelor and The Bachelorette are few and far between, and they usually don’t get much screen time. That’s why I was surprised when the cameras really began picking up the flirtations between Ben and Jubilee. When he took her on a one-on-one date and Jubilee started opening up about her past and all of the feelings she has about Ben and about being on the show, I was more than a little invested in the relationship. There have been 20 seasons of The Bachelor — everyone, contestants and viewers alike, know how the sausage is made, and we’re still supposed to sit on our couches and pretend like we don’t see what edits the producers are doing and how some of the contestants are manipulated into certain situations? (Disclaimer: I also watched a lot of UnREAL this year.) Ben got rid of Jubilee way too soon, and here’s why.

Jubilee Had Baggage & Wanted To Talk About It

On their one-on-one date, Jubilee opened up to Ben about her particularly awful childhood. We learned that she was adopted from Haiti, and that all of her biological relatives are dead. Jubilee told Ben that she still suffers from survivor’s guilt, and she frequently wants to know why she was the one who made it out of Haiti alive. The fact that Jubilee didn’t hide this from Ben says a lot about her — she understands that you have to be open and honest about your past in order to embrace your future.

Jubilee Was Upfront About Her Insecurities

It’s not like Jubilee is a perfect angel — she had some really insecure moment on the show. I think she got caught up in the craziness of The Bachelor and just had a few moments of, “Why am I here? What am I doing?” Totally normal. Jubilee told Ben that she wasn’t sure why she was there and that she felt unlovable, and Ben seemed surprised. From the outside, Jubilee seems really secure, so to show that side of her took guts. And, hey — you have to know your problems before you can solve them.

Jubilee Knew How The Bachelor Game Was Played

While in Mexico, Ben took some of the women out on a group date where they were taught Spanish phrases like “I love you” and other Bachelor­-related garbage foolishness. Ben and each woman took turns saying these words to each other, and Jubilee was all, “You just told 15 women before me that you loved them, dude.” I can’t blame her for not wanting to do the song-and-dance, can you?

Jubilee Was The Strongest Woman On The Show

According to her ABC.com profile, Jubilee signed up for the US Army at 18 and made it through four-and-a-half years of active duty before calling it quits. Coupled with her tough childhood, Jubilee has seen more things than most people, and she’s come out the other side a little roughed up, but still kicking. Her struggles put all of the stupid infighting on The Bachelor in perspective, don’t they?

So who did Ben send away too early? In my house, it’s Jubilee, but we’ll just have to wait for The Bachelor’s “most dramatic episode ever” to find out if I’m right.