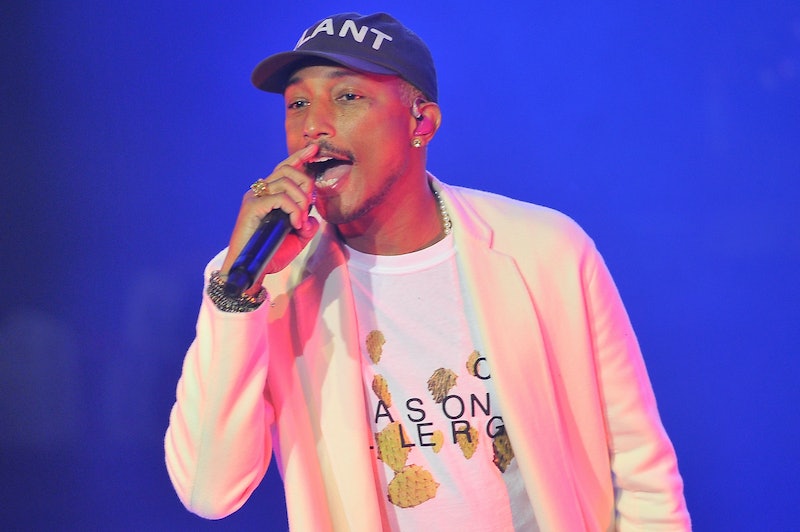 Out of all the hundreds of artists who have ever been nominated for or have attended the Grammy Awards in the recent years, only a select few have ever made as much of a fashion statement as Pharrell. To this day, everyone still remembers when he wore the iconic brown Vivienne Westwood hat at the 2014 awards. But Pharrell's 2016 Grammys outfit — a Chanel tweed jacket over a white t-shirt and jeans — proves once again how his fashion risk-taking always pays off. Plus, can we talk about how great Pharrell's blonde hair looks? Sharing another memorable fashion moment with him is his wife, model Helen Lasichanh in a chic striped mini with lace stockings and combat boots.

Pharell's appearance at the Grammy Awards is certainly more than just to add a pop of excitement to the red carpet. He is nominated for four Grammys tonight: Best Music Video for "Freedom," and co-nominations for Song of the Year and Rap Song of the Year ("Alright"), as well as for Album of The Year for Kendrick Lamar's To Pimp A Butterfly. I have to give major props to Pharrell for challenging gender norms in this Chanel jacket at the Grammys. But even with such a kick-ass outfit — as per usual — a little part of me was waiting for him to show up in another buzzworthy hat.

Even without his signature accessory at tonight's Grammys, his past red carpet appearances prove that Pharrell has the strongest hat game in the music business. Check out three of my favorite looks below:

Last week, Pharrell sported a navy bowler hat at the 2016 MusiCares Person of the Year event alongside Rihanna.

The headwear that inspired hundreds of memes and Twitter parody accounts was actually a vintage Vivienne Westwood hat from her "Buffalo" collection.