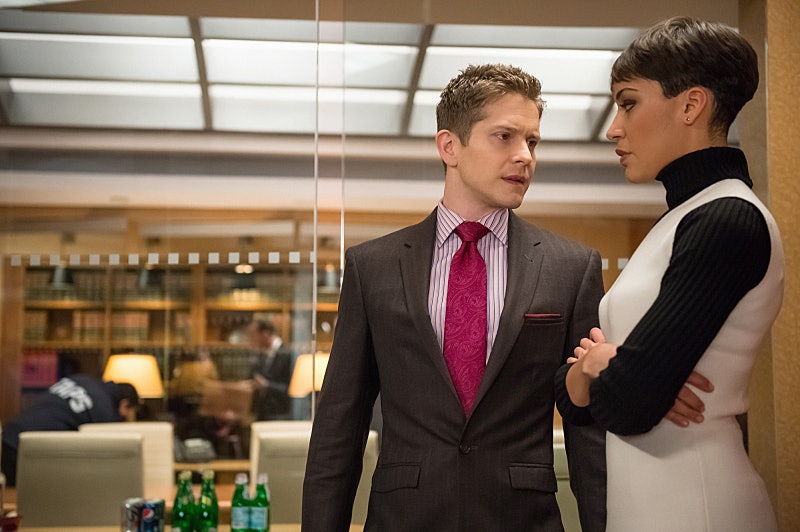 Alicia, Lucca, Cary and Diane grappled with some growing pains as the four began to work together on The Good Wife 's "Monday." After their own business was taken down by a malpractice suit, Alicia and Lucca joined Lockhart, Agos & Lee on The Good Wife . While Alicia got to come back as more than an associate, Lucca had to start from the ground up with all the other associates, meaning the two friends and former partners were split up by bureaucracy at their new firm. But, when the firm's IT guy, Howell, got caught in the middle of a case of stolen technology, Alicia called Lucca to help against Diane and Cary's orders.

After refusing to return to her old firm, Alicia finally caved and took a spot at Lockhart, Agos & Lee when Cary offered to take her and Lucca on and settle their malpractice suit. With no other option but to go back, Alicia found herself with an office on the 27th floor — the floor below Diane and Cary's name partner offices, where all the associates (including Lucca) and lower-level attorneys are stations. On their first day at the firm, Cary attempted to separate Lucca and Alicia, putting Lucca on a case with fellow associate, Monica. (The fact that the two are the only black associates was not lost on them.)

Not used to working solo, or under the orders of Diane and Cary, Alicia decided to take Lucca off her assignment so that the two could work the Howell case together. Lucca, of course, jumped at the chance, and Diane and Cary were less than pleased. In fact, Diane was so miffed by the whole thing that she called Alicia into her office for a private chat. Lucca needs to learn how the firm works, she said. But most importantly, Diane wants Lucca to know that she doesn't answer to Alicia anymore, she answers to Diane and Cary and David Lee.

Alicia apologized for taking Lucca off her assignment, but if I had to guess, I'd say she doesn't feel sorry at all. Lucca and Alicia are the dream team, and Alicia made it clear that, as far as she's concerned, Lucca is her equal at the firm.