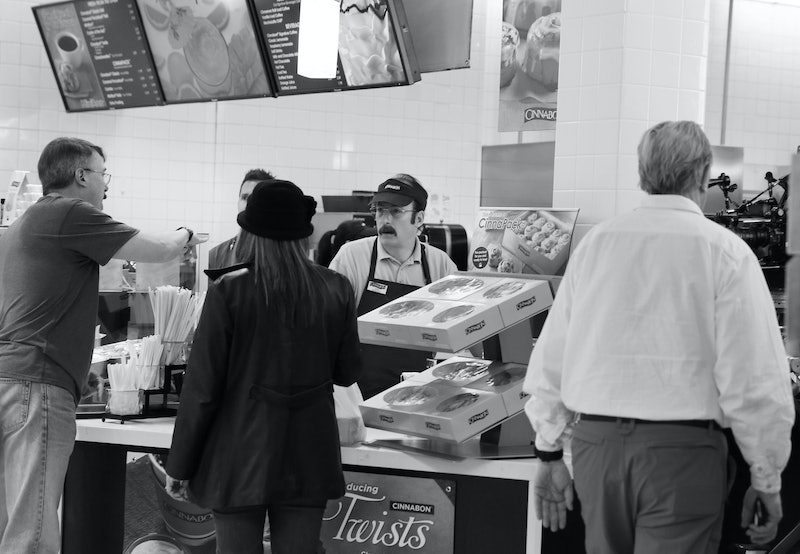 Tonight's sophomore season premiere of AMC's Breaking Bad spinoff Better Call Saul opened in exactly the same way Season 1 began: with a black-and-white flashforward to Saul Goodman's post-Walter White life, working as a Cinnabon manager named Gene in Omaha, NE. The pre-credits sequence of Better Call Saul Season 2 picked up right where Season 1's left off, with Gene locking up the small shopping mall eatery for the night. However, thanks to the expert way showrunner Vince Gilligan has crafted his series, an action as mundane as Saul taking out the trash becomes a huge window into the character's soul… and shows viewers exactly how far he's come since his Breaking Bad days.

As Saul — sorry, Gene — hauls the heavy garbage bags to the mall's dumpsters, the heavy door swings shut behind him and locks him inside the trash room. The only other person in the mall is a janitor listening to music on his headphones. And the only other way out of the room is a back door with this sign on the door: "Emergency Exit Only! If you exit this door you will activate the alarm, and the police will be notified." Gene's fingers hover over the handle… but he can't bring himself to push, preferring to sit and wait two-and-a-half hours for the janitor to finally let him out. (He also left a little hand-etched graffiti on the wall as a souvenir: "SG Was Here.")

Gene's hesitation to commit even the tiniest of legal infractions is a far cry from his freewheeling, ethically murky days as sleazy lawyer Saul Goodman. Compare that moment to the final season of the premiere, after Saul — sorry, Jimmy McGill — has accepted the job offer with Davis & Main. He's settling into his swanky new office when he notices on a light switch on the wall next to the patio door. The switch is taped over with a label that reads: "Always Leave ON!!! Do NOT turn OFF!" What does Jimmy do? He peels off the tape and flips the switch. Just for the heck of it, with no idea of what it might do or what havoc he might wreak.

Nothing happens. The entire office building isn't suddenly plunged into darkness and chaos. Heck, the little patio lights on either side of the door don't even turn off. For all we know, Jimmy just crashed some all-important server somewhere in the building — but his little anarchic action has literally no observable effect whatsoever on the world around him.

These opening and closing moments of the season premiere are perfect bookends for a show that's more slow-burning character study than action-packed crime drama. One glimpse into Saul's past and one into the future perfectly illustrate just how much the character will change over the course of the series. Now all we have to do is sit back and watch it unfold.