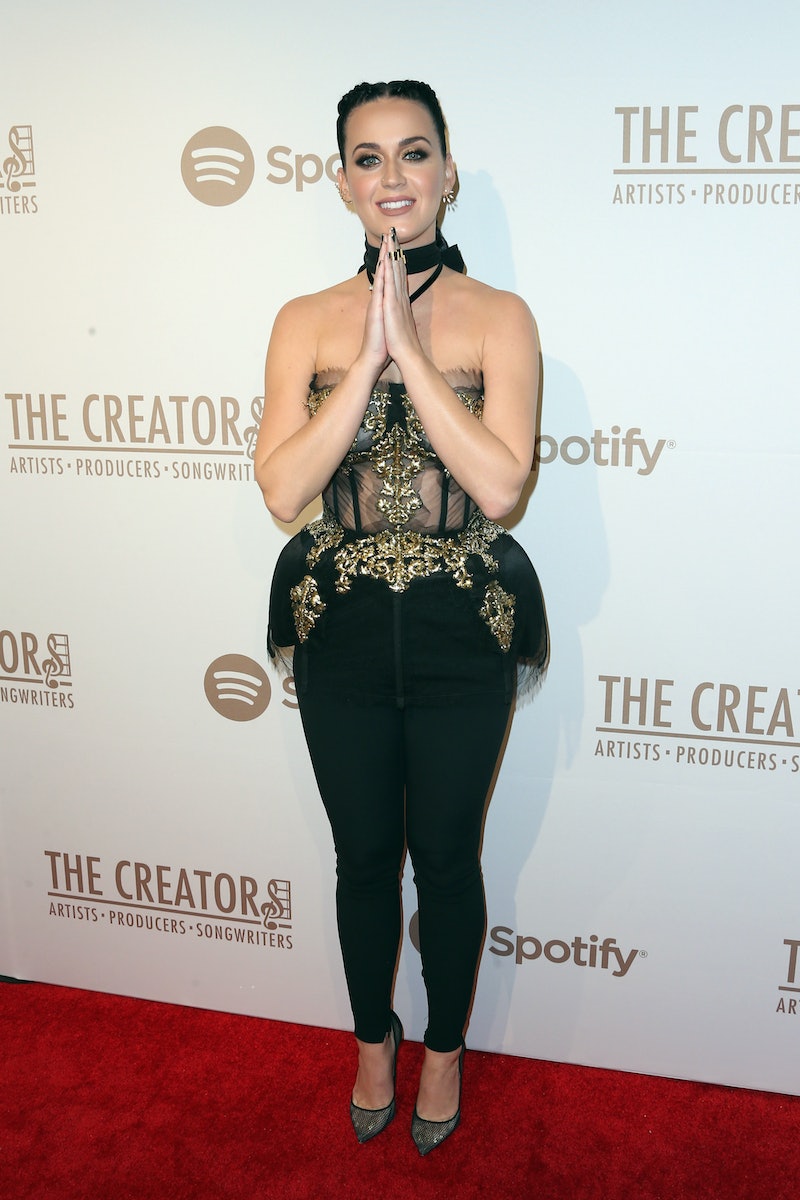 Katy Perry has been having a fairly low-key 2016. She wrapped up a world tour at the end of 2015, hasn't released any new music since her 2013 album Prism, and is just starting the research and development phase of her fourth studio album. So it doesn't come as a huge surprise that Katy Perry skipped the 2016 Grammys red carpet, preferring to spend music's biggest night at home, "In my pajamas, eating matzo ball soup. No makeup, glad I’m not in a corset. Vicks cream on," as she explained in an interview with The New York Times.

That doesn't mean Perry entirely gave up on red carpet fashion this week because instead of attending the 2016 Grammys on Monday night, Perry hosted a pre-Grammys party with Spotify, “An Evening to Celebrate the Creators” on February 13. The exclusive, star-studded and black-tie event, to which she even invited her alleged nemesis Taylor Swift, was only open to singers, songwriters, producers, and other creators in the music industry. As she explained to The New York Times, "In some ways, I’m trying to start the Met Ball of music."

And though she might have been trying to host a relatively low-key affair and an opportunity for her to network and hobnob with her musically-inclined peers, Perry wore an outfit that was anything but subtle. Her look fell somewhere between baroque, gothic glam and Madonna's lacy, layered look from the years of "Like A Virgin." The bustier's gold detailing is delicate, almost Alexander McQueen-inspired, laid over a delicate sheer paneled corset. She paired the low-cut top with with a pair of tight black pants and mesh black pumps, accessorizing with a black choker.

Perry opted for a relatively simple, golden smokey eye with a neutral lip and rosy cheeks, and that warmth definitely keeps her from fully channeling Hot Topic-era gothic vibes. She finished the look with long, braided pigtails, which looked pretty similar to the boxer braids that Kim Kardashian has been rocking recently, which definitely turns this hairdo into a trend.

Though Katy Perry's fun, whimsical looks will definitely be missed on this year's red carpet, we can't complain too much because we still definitely got some chic fashion from her this week. And besides, there's always next year! Maybe she'll have some new music by then, too.

More like this
Billie Eilish Has An Exciting Relationship Update About Her Boyfriend
By Grace Wehniainen
Twitter Can’t Get Enough Of Lewis Capaldi Creating Fashion Looks For ASOS
By El Hunt
Here Are All 703 Outfits Rachel Wore On Friends
By Kat George
Dua Lipa On YSL Beauty, Plus Her Fearless Approach To Hair & Makeup
By Erin Stovall
Get Even More From Bustle — Sign Up For The Newsletter