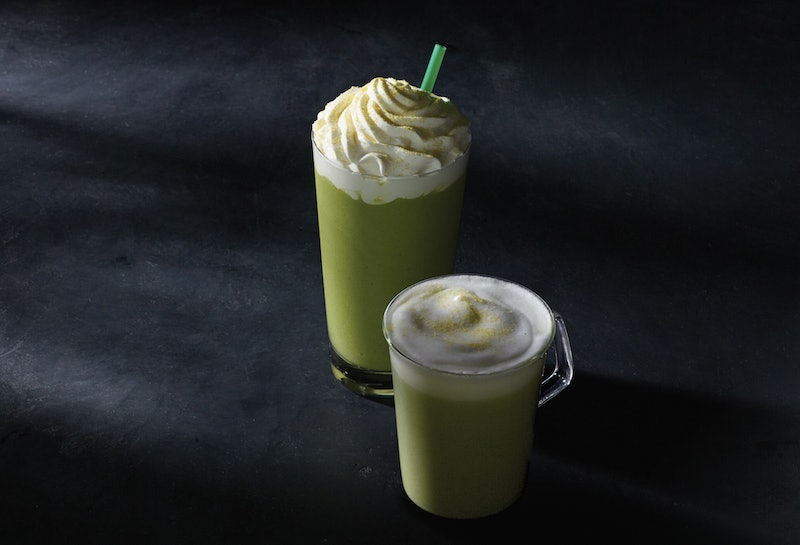 Pretty much the only thing that makes Monday mornings (or any morning, for that matter) even the slightest bit bearable is being able to curl your fingers around your favorite caffeinated beverage, and with two new Starbucks drinks on the horizon, your prospects are looking even brighter than usual — especially if you prefer tea over coffee. Starbucks is adding a Teavana Citrus Green Tea Latte to its menu for a limited time, which sounds like a delicious time, but let's get down to the most pressing question: Does the Teavana Citrus Green Tea Latte have caffeine? The short answer is a glorious, resounding "yes."

While green tea lattes are nothing new at Starbucks (there's been one on the menu since 2006), this new beverage is particularly standout because of its refreshing flavor. According to Starbucks, the drink has "sweet creamy, lemon notes" — most likely due in part to the citrus mint syrup used to make the beverage (green tea and steamed milk form the base of the drink). The drink was first tested out at Starbucks' Reserve Roastery and Tasting Room in Seattle, where it was so popular the brand decided to bring the latte to the rest of the country (thanks, Starbucks!).

That's great and all, but when your 3 p.m. afternoon energy slump hits, there's only one thing that really matters — caffeine.

How much caffeine is in the Teavana Citrus Green Tea Latte?

According to Starbucks, a tall order (12 fl. oz.) of the drink contains 55 mg of caffeine — roughly the same amount you would find in its regular Green Tea Latte of the same size. (For the sake of comparison, a tall Starbucks Caffe Latte has approximately 75 mg of caffeine.) So, if you're feeling a little less chipper than normal, this could be exactly what you need to get back to 100 percent.

What else is in the Teavana Citrus Green Tea Latte?

I already mentioned the citrus mint syrup, but in case you're curious about what else goes into this delicious drink, here's how Starbucks describes it:

How much does it cost?

According to Starbucks, the Citrus Green Tea Latte will range in price from $3.45 to $3.95 depending on where you're at, and will be available for a limited time starting Feb. 16. So, make sure you grab at least one while they're around, and while you're at Starbucks, go ahead and pick up its new limited edition Smoked Butterscotch Latte as well. There's just something about knowing that a beverage isn't going to be around forever that makes it taste even better, you know?