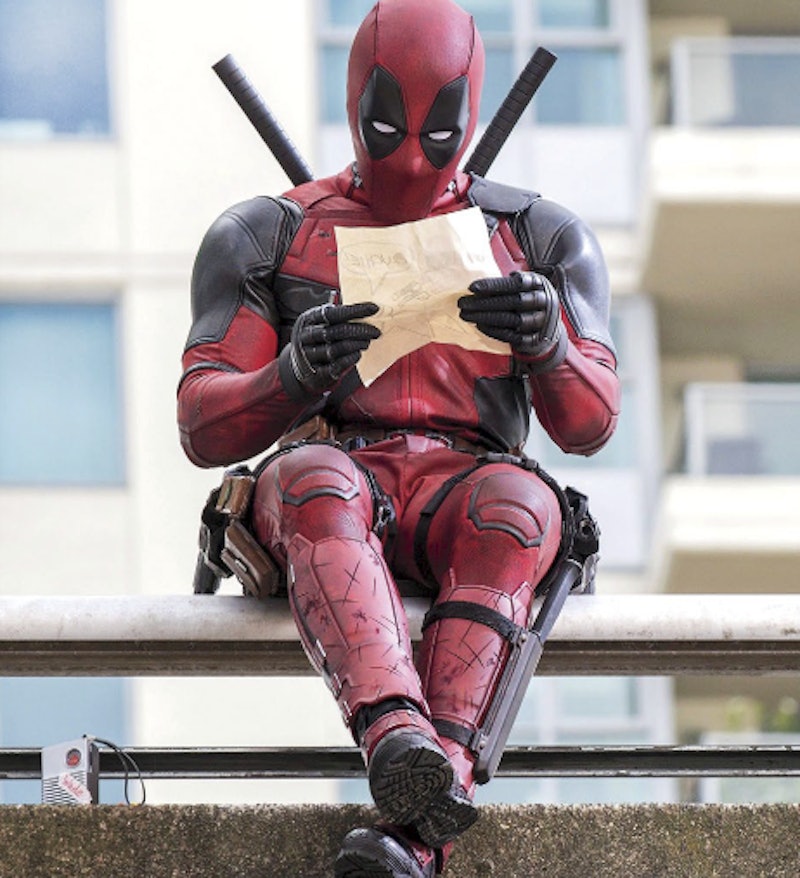 Deadpool has arrived in theaters and has absolutely destroyed all expectations for the superhero film. The movie shattered a number of box office records, notching the highest opening weekend ever in February, the best opening ever for an R-rated movie, and even had a better opening weekend than any previous X-Men movie. In fact, it's already made more money domestically in four days than X-Men: First Class made during its entire run in theaters. Studio executives all over Hollywood are likely scrambling to figure out why the R-rated superhero flick did so well, but I think I have the answer: the Deadpool soundtrack.

Granted, Ryan Reynolds' performance, the popularity of the character, and the film's twisted humor and skewering of the superhero genre all helped, but the movie's soundtrack really represents the film's tone perfectly. Consisting of a whopping 23 tracks, the bulk of these songs are parts of the score composed by Junkie XL. With names like "Liam Neeson Nightmares", "This Looks Sanitary", and "A Face I Would Sit On", it's clear the composer knew the material he was scoring inside and out. But it's the six non-score songs on the Deadpool soundtrack that I'll be ranking, and keep in mind, they're all great.

The Deadpool soundtrack features a healthy mix of ironic old songs and ironic really old songs, but this early teen pop song from 1961 might be a bridge too far.

Remember DMX? Sure you do. This 2003 track is probably the most associated with the movie thanks to its prevalence in the trailer, but it's definitely not the best song of the film, nor is it the most fitting of the movie's titular hero. If you ignore the not-so-great lyrics, though, then the song is a pretty enjoyable listen, thanks to that driving beat.

4. "Angel Of The Morning" — Juice Newton

This is an excellent, timeless song. And of the bajillion versions of it that exist, this countrified 1981 rendition by Newton is the most successful. The only problem is that it's been used already in a ton of movies and TV shows, meaning it's unlikely that when you hear it, the first thing you'll think of is Deadpool.

One of the most-recognizable rap songs of the '90s by anybody, and Salt N Pepa's signature track, this 1993 song was also notable for lyrics that sexualized men in a way that had really only ever been done for women up until that point, making it a perfect partner for the sexually fluid antihero.

This 1984 love song is featured on about a million soundtracks, it's true, but its schmaltzy saxophone juxtaposed with Deadpool's raunchy content is just too great to pass up.

This song sounds like The Lonely Island crossed with LMFAO with a little of Vanilla Ice's "Ninja Rap" sprinkled in. In other words, it's perfect. Originally created by the video game rappers in 2014 in response to the Deadpool game, the group recorded new lyrics based on the movie. It's unabashed silliness and knowing ridiculousness are absolutely perfect for this movie that doesn't take anything seriously.

So there you have it, the tunes of Deadpool's soundtrack ranked. Don't agree with my picks? That's fine, these things are subjective! Now if you'll excuse me, I'm going to go listen to "Deadpool Rap" on repeat while eating chimichangas.