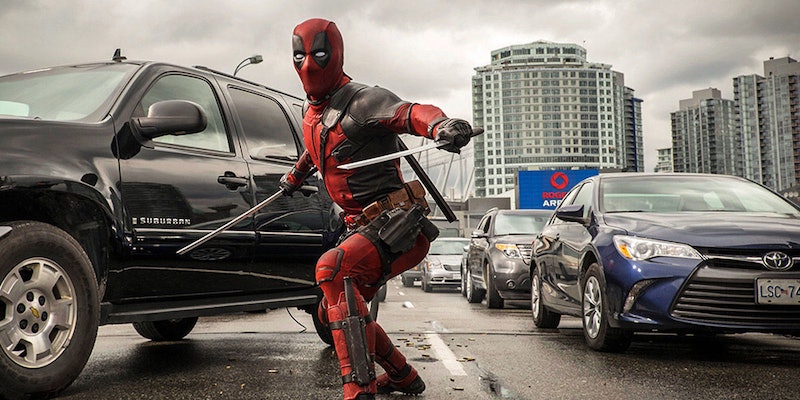 Deadpool hasn't even premiered in theaters yet, but due to the film's clever and omnipresent marketing, its stellar reviews (82 percent on Rotten Tomatoes), and the character's rabid fanbase, a Deadpool sequel is already in the works at Fox. The foul-mouthed, ultra-violent, R-rated superhero comedy movie is rewriting the rules about what a successful comic book movie can look like, and fans should expect more of the same whenever Deadpool 2 rolls around. But given the time and the great lengths taken to get the first Deadpool, how long until fans will realistically see a sequel? When will Deadpool 2 come out?

The answer is a little difficult to obtain, given the turmoil going on with Fox's Marvel properties. Studios typically schedule out their superhero movies, which are considered surefire moneymakers, years in advance. This year, Fox is scheduled to release three superhero flicks: Deadpool on Feb. 12, X-Men: Apocalypse on May 27, and Gambit on Oct. 7. As for next year, the studio had planned Wolverine 3 for Mar. 3 and Fantastic Four 2 for June 2. Finally, the studio has one spot reserved so far on July 18, 2018 for an unannounced Marvel movie. Now, here's where things get complicated.

Due to considerable turmoil on the production of Gambit (the film lost its director, and took a long time to replace him), the movie hasn't even started filming yet, and won't until March. Although Fox hasn't yet postponed its release date, there's simply no way that the movie will be ready in time for October Next, thanks to Fantastic Four's bad debut last year, its sequel has been indefinitely postponed. This leaves two open spots on Fox's superhero calendar: Oct. 7, 2016 and June 2, 2017. Both of these dates are likely too early for any Deadpool sequel, but Gambit could very well vacate the October date and move into the June slot, provided that it has no more issues. This leaves July 18, 2018 as probably the only mystery date on Fox's current calendar.

Another complication for Fox is the status of their X-Men films. Apocalypse is seen as the likely end of the "First Class" group of X-Men, as the contracts are up for stars Jennifer Lawrence, Michael Fassbender, James McAvoy, and Nicholas Hoult. Whether or not the franchise moves forward with the young new characters introduced in Apocalypse will likely depend on that film's reception, but with no plans yet for filming or direction, an X-Men movie in 2018 seems like a long shot at this point.

That makes that year a prime destination for a sequel to Deadpool. Although nothing is confirmed, with no X-Men, no Wolverine, and no Fantastic Four films likely, Fox is going to have to come up with something Marvel-related. And given how much of a hurry they were in to greenlight a sequel to Deadpool before it even debuted in theaters, it looks like they want to start working on another film starring an ugly Ryan Reynolds sooner rather than later.