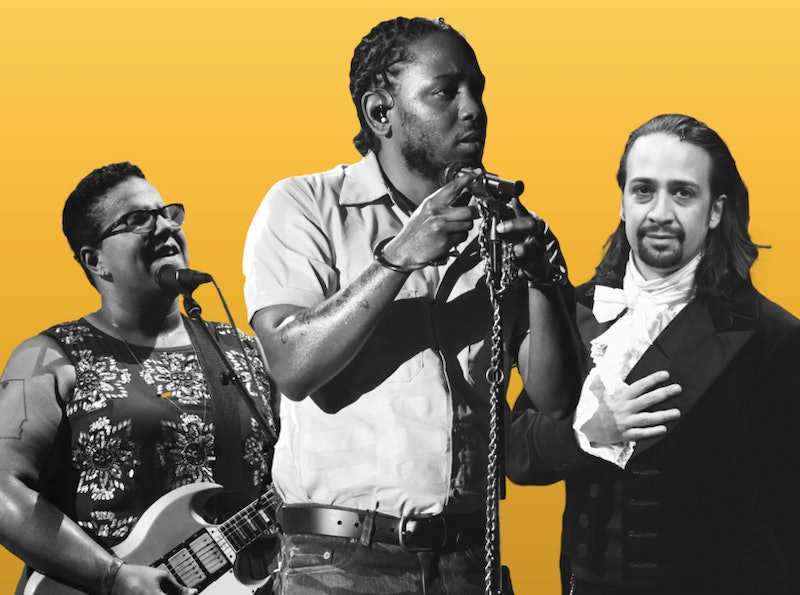 This year's award season has been full of talk about diversity, particularly when it comes to the Academy Awards. Like last year, the hashtag #OscarsSoWhite has been going around on social media in regards to the lack of any nominees of color in all four acting categories. But one award show that, fairly consistently, features a lot more diversity is the Grammys, which aired this year on Monday, Feb. 15. When the nominations were announced in December, the Grammys showed racial diversity in many of the major categories, (for example, three out of five nominees for Record of the Year featured artists of color and the same went for Album of the Year), and that continued into the actual awards that were handed out, the performers who were featured, and the presenters who announced the winners. And not only that, there was diversity when it came to male and female winners and genres of music that were granted performances.

To start with the awards, the winner for most nominations this year was rapper Kendrick Lamar who was nominated for 11, including Album of the Year, Song of the Year, and Best Rap Album. Lamar won five of the awards he was nominated for; although he didn't win any of the big three of the night. Those went to Taylor Swift (Album), Ed Sheeran (song), and Bruno Mars and Mark Ronson (Record).

Another very exciting award in terms of diversity was the winner for Best Rock Song, which went to Alabama Shakes, a band fronted by a black woman singer, Brittany Howard. This award rarely goes to songwriters of color or to women. Danger Mouse won the award along with the Black Keys in 2013 for "Lonely Boy" but before that the last winner of color was Tracy Chapman in 1997. Alabama Shakes also won this year for Best Alternative Album.

The Grammys, as has become tradition in recent years, announced a lot of winners before the show rather than during it, which left room for many, many performances that were also pleasantly diverse. The amount of performances they stuffed in there could really leave you fatigued, so it was nice that there was something for everyone. There was country (Sam Hunt, Little Big Town), rap (Lamar, Pitbull), R&B (The Weeknd, the Lionel Richie tribute), pop (Taylor Swift), even musical theater (the cast of Hamilton). In one of the best displays of diversity of the night, we went from Lamar's show stopping performance to Hamilton writer and star Lin-Manuel Miranda accepting the award for Best Musical Theater Album, giving a speech in rap form. In another moment later in the show, we even got to hear from a 12-year-old Indonesian pianist named Joey Alexander, who was the youngest nominee this year!

To single out Lamar's performance for a minute, because it truly deserves to be singled out, the 28-year-old gave what was by far the most exciting and fiery acts of the night. The performance started with the rapper and other men walking out in front of a prison set wearing chains and morphed into a set that involved African drumming, dancing, and tribal paint. Watching I couldn't help but be reminded of Beyoncé's recent Super Bowl performance of "Formation," which featured backup dancers in Black Panthers outfits. Both performances took black culture and issues to the mainstream in really powerful ways that you don't normally see on such a grand scale.

It should go without saying that diversity in entertainment doesn't begin or end with award shows. Especially when it comes to something like the Academy Awards, directors, writers, and actors of color have to be able to get their work produced and be allowed to take on more roles in the first place, before they can even be nominated. That said, I think there is a lesson to be taken from the Grammys, not for the Oscars itself, but for higher ups in entertainment in general. This year's Grammys showed that people are interested in a very wide array of entertainment and that certain interests aren't less important than others. For instance, as a black woman who loves rock music, seeing Howard win, was just plain cool. Fans are diverse and we just want diversity in our entertainment. It's a very simple concept and the Grammys truly showed it off this year.

More like this
Stormi Just Walked A Red Carpet With Mommy Kylie Jenner & Daddy Travis Scott
By Hugh McIntyre
Twitter Is Upset About The 'American Idol' Top 3 Results: "Who TF Is Voting?"
By Jake Viswanath
Sam Ryder Is Ignoring The Eurovision Hype, Too
By El Hunt
Eurovision Drinking Games That’ll Earn You 12 Points Of Fun
By Bustle UK
Get Even More From Bustle — Sign Up For The Newsletter