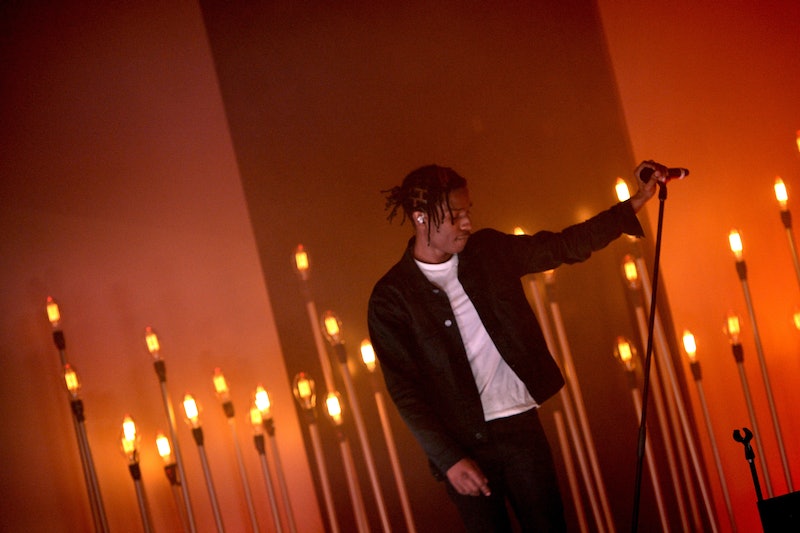 One of the highlights of Zoolander 2 didn't come until the end of the film, when A$AP Rocky showed up to perform his "Relax (Remix)" — a new take on the Frankie Goes to Hollywood hit that was critical to the plot of Zoolander as the song that helped brainwash Derek Zoolander. Although Rocky only made a brief cameo at the top of the sequel's end credits, the track played as cast members danced over the credits, and A$AP Rocky could be heard rapping about Zoolander, Hansel and Mugatu. The new track, a collaboration from A$AP Rocky and Skrillex, who also has a cameo in the film, is basically everything you could ever ask from a Zoolander soundtrack, so it's no wonder fans are wondering where you can get the A$AP Rocky Zoolander 2 song.

Days after Zoolander 2's Feb. 12 release date, A$AP Rocky's take on "Relax" is MIA from popular streaming sites and iTunes, though the movie's score from composer Theodore Shapiro is currently available for purchase. It looks like fans will have to wait until the official soundtrack is released on March 11 to hear all the tracks. In the meantime, fans can listen to a tease of the song courtesy of a 2-minute trailer for the film.

A$AP Rocky makes a brief appearance in the trailer, around the 44-second mark, and can be heard rapping about the male models starring in the film. "Hansel and Derek/I'm handsome, you jealous/I can tell it from facial expressions," Rocky says. Based on the fact that there isn't already a star-studded music video for the song, it looks like those waiting for an epic, Zoolander-themed music video might want to let go of that particular dream.

That said, there's little doubt that the "Relax" remix will be on the official Zoolander 2 soundtrack once it finally hits the shelves. So, all fans have to do is, as Rocky himself says, relax, and be patient.