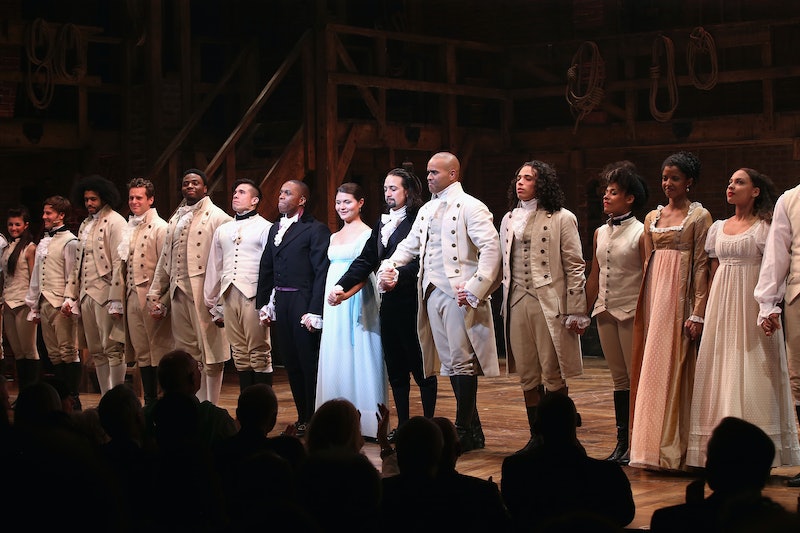 Broadway's Alexander Hamilton and company dress like founding fathers and mothers on the stage daily, but the Hamilton cast at the 2016 Grammys didn't grace us with its sartorial stage wonderment. Actors Lin-Manuel Miranda, Leslie Odom Jr., Renée Elise Goldsberry, Daveed Diggs, Phillipa Soo, Christopher Jackson, Jonathan Groff, Anthony Ramos, Okieriete Onaodowan, and Jasmine Cephas Jones are nominated at the 58th Annual Grammy Awards for "Best Musical Theater Album," and how could they not be? A play that touches upon ambition, sexual agency, fidelity, and — dare I say — freedom and then turns those nitty gritty topics into catchy tunes? That was bound to be a State-side fan favorite, if I've ever heard of one.

Hamilton tells the tale of Alexander Hamilton, of course, along with George Washington, Eliza Hamilton, Thomas Jefferson, and Aaron Burr. Despite all the actors hanging around in 1700s fashions most of their days, my dream that they would rock the carpet in similar threads come Feb. 15 was left unfulfilled. How I wish the gents had kept things gentlemanly while the women could've brought out every ounce of 18th century glam I could ever hope for. While I would've loved to see a little more vintage on the carpet (their play is set in the 1700s, y'all!), Hamilton's live-from-New-York performance that aired at the Grammys was full of the fashions the founding papas and mamas would've sported back in their day.

The Grammys is one of the most elegant awards shows in the season. It's just too bad we didn't get to see all the 1700s chicness on its carpet.

More like this
The Most Extra Party Girl Beauty Looks From The Early 2000s
By Paris Giles
All The Early 2000s Hairstyles Rihanna Wore In A$AP Rocky's "D.M.B." Video
By Olivia Rose Ferreiro
Cameron Diaz Just Recreated *That* Iconic 'There’s Something About Mary' Scene
By Rachel Mantock
5 Mini Skirt Outfits To Wear, Inspired By These Brave Souls
By Avery Matera
Get Even More From Bustle — Sign Up For The Newsletter