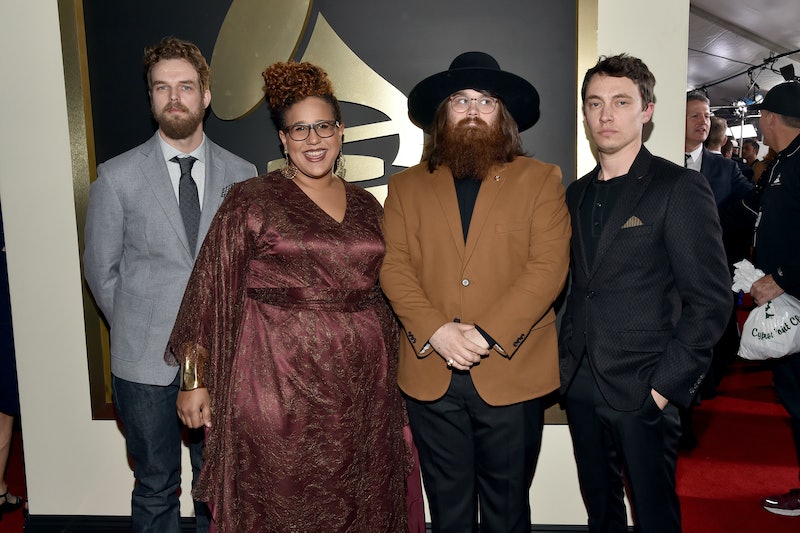 Lead vocalist and guitarist of Alabama Shakes Brittany Howard is a sight to behold. A plus size WOC who wears "non-flattering" silhouettes, hipster glasses, and who somehow manages to mix blues, jazz, Americana, and '50s rock-and-roll into one beautiful hybrid, she's a gem. And Brittany Howard at the 2016 Grammys? Well, she's pretty much schooling us all on her sheer radness. Not that we needed her impeccable red carpet style to remind us of her magic. I mean, Howard and Alabama Shakes were nominated for five Grammys at the Feb. 15 event, including Best Alternative Music Album, Best Engineered Album (Non Classical), Best Rock Performance, Best Rock Song, and even Album Of The Year. And they already took the Grammy for Best Alternative Album at the pre-telecast! She obviously has a ton of talent. But tonight, we're behind reminded that said talent transcends to the sartorial world.

I understand the urge to toss fashion aside in celebration of professional accolade. I really do. But can we just take a moment to appreciate Howard's oversized, textured, jacquard-esque gown? In the so-called rules of plus size fashion, there's this sort of paradox. Curvy and fat women are often told to hide their bodies above all else in baggy, trash bag-esque cuts, while simultaneously being chastised for wearing "unflattering" clothes that don't showcase their curves.

Howard, however, proves that there are no style rules, other than the ones we craft for ourselves. In her shapeless, oh-so-Game-Of-Thrones-ish burgundy gown, she's preaching plus size visibility without ever having to say the words.

More like this
Doja Cat Wore Surrealist-Inspired Schiaparelli To The BBMAs
By Dominique Norman
Machine Gun Kelly Wore A $30K Diamond Mani To The BBMAs
By Paris Giles
How To Master Baby Braids, According To TikTok
By Tomi Otekunrin
All Of Kourtney Kardashian’s Wedding Dresses
By Allie Fasanella
Get Even More From Bustle — Sign Up For The Newsletter