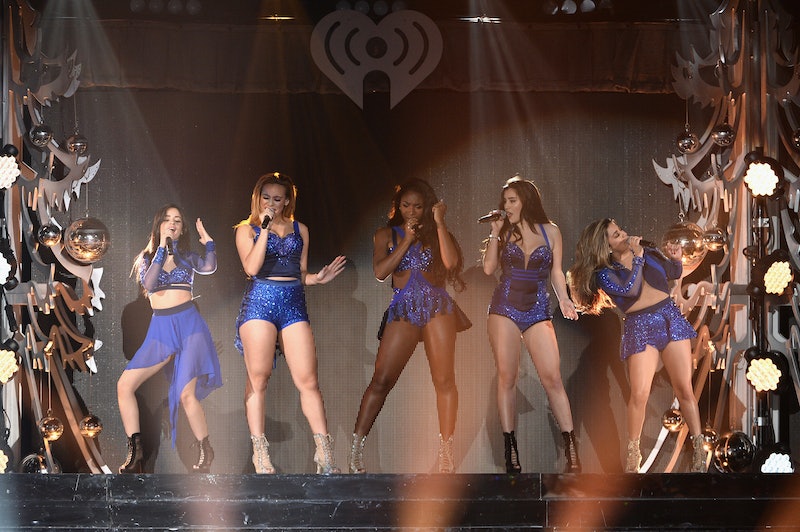 After months and months of speculation, Fifth Harmony's new single finally has a release date: Fri., Feb. 26. That's only 11 days away! How did this information come to light? Believe it or not, the CEO of 5H's record label, L.A. Reid, tweeted it out last Friday. Admittedly, it's a little strange that the music mogul decided to unveil the date so casually... but Harmonizers aren't complaining! We're just thankful that the group didn't draw out the reveal for weeks on end (see: Rihanna's confusing ANTIdiaRy campaign). Frustratingly, though, the name of the upcoming track is still a mystery. All we have to go on are rumors.

So, rumor has it the title of Fifth Harmony's much-anticipated new single is only three words long. In December 2015, SPIN reported that the lead offering from "5H2" — the nickname for the band's upcoming sophomore album — could be the Tinashe-penned "She's My Girl," which obviously fits the parameters. Also, a new 5H song called "Big Bad Wolf" was recently registered online. That one fits, too! However, the latest buzz is that the track is called "Get Up Again." An alleged snippet of the tune, which appears to have been recorded during the band's purported music video shoot, has been making the rounds online:

If you listen closely, it does sound as though the phrase "get up again" is sung at the beginning of the clip. Fanning the flames of this buzz, Fifth Harmony's Dinah Jane posted a picture with fellow member Lauren Jauregui (below) over the weekend with the caption, "Destiny said it you gotta get up and get it."

How suspicious! The quintet may have shot the video for their new single in California last week, so, in theory, everything could be ready-to-go — we're just waiting for an official announcement. Perhaps 5H will surprise their fans during the 2016 Grammys, which air live on CBS at 8 p.m. ET. They may not be up for any awards this year, but it is known as "music's biggest night"! Stay tuned for more details.