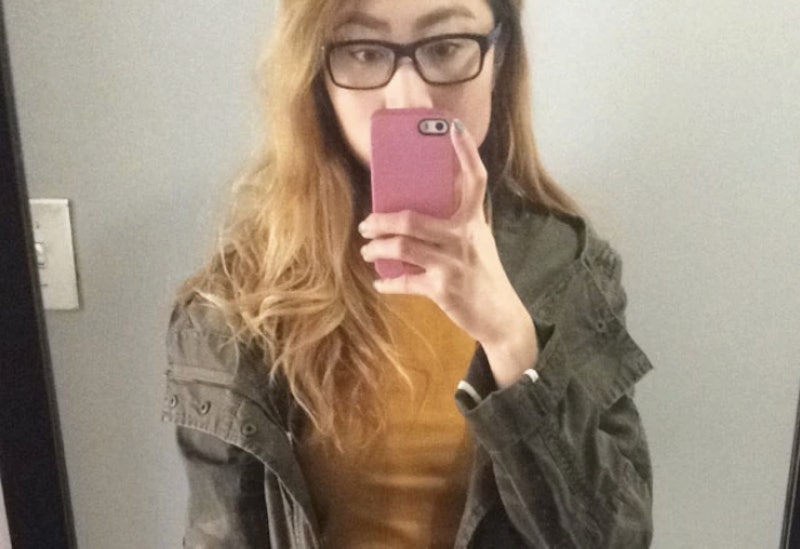 As a pre-teen in the late '90s and early 2000s, I was exposed to a ton of interesting cartoons that may or may not have been geared towards adults. But being the "rebel" child that I was, I watched them anyway. One of my all-time favorite shows was Daria . It helped shape my sense of humor. And since it's considered cool and hipster to know all about '90s and early oughts these days, watching certainly paid off. The clothes on Daria reflected the era perfectly. Pre-teen me was definitely trying to figure out how I could rock a few of those outfits IRL. To me, Daria was cool, incredibly sarcastic, and that deadpan humor? Yup, key ingredients for a sartorial influencer.

With the comeback of all things '90s, Daria is regularly being referenced in popular culture. I couldn't help but ask myself, what would it be like if I dressed like Daria characters for a week? Would people realize who I was trying to portray? Would they give me weird looks because some of the outfits are so outdated? Would the clothes of the era still be considered a little bit stylish?

For the sake of all that was Daria and my childhood, I had to find out. I decided to dress like the show's characters for a week to see if it really was a "sick, sad, world" out there.

I took the plunge by starting this experiment with a pretty major character: Daria's BFF. It took me a while to put the pieces together for this look, simply because I don't usually wear this kind of outfit. I just don't sport bright red on the regular, but I did receive several comments from friends and family about how "cute" I looked. No one picked up on the reference to Jane's outfit at all, unfortunately.

Flared pants and a cute pink or red top made for a top outfit choice when I was 12. This was a pretty interesting ensemble to put together. First of all, my old jeans didn't fit. I worked from home this day, but did get a bunch of peculiar looks from my siblings — who mostly thought I was being really weird for dressing up in flared pants.

Funnily enough, my siblings also watched Daria, yet they didn't get the reference I was trying to channel. A comment from my cousin on Snapchat revealed that she liked the outfit and wished she could pull it off. Personally, I didn't feel like I could pull off Quinn's look myself.

Out of all the Daria characters' outfits, this one is actually something I'd actually wear on a day to day basis. I sent out a Snapchat wearing this ensemble to see if it would garner any comments, but there was an underwhelming lack of response.

I did receive a comment at work about the outfit being "classy" (with hints of sarcasm in their tones), but my coworkers were unfamiliar with Daria so they didn't catch any references. At least I felt comfortable and cute, though.

Oh Stacy, you and your braided pigtails and innocent eyes. This outfit is so beyond my personal style that it felt incredibly uncomfortable to wear. As I was doing my hair in braided pigtails, I got peculiar looks from a coworker whose expression read, "WTF are you doing?" I also got a comment about how my yellow shirt was "too yellow," along with a strange look.

On the flip side, I received a compliment from a male friend about how "cute" I looked in the style "because of my babyface." It was clear that this look was garnering a mixed bag of reactions, including some mildly uncomfortable ones. It seemed women were going for all things sassy while the men in my life enjoyed the youthful cuteness of the outfit. I'm not really sure what the latter means, but it felt ever so slightly unnecessary.

Trying to channel Daria's love interest was pretty easy. I wouldn't really wear this combo together normally, but I had to do right by Trent and channel him as best as I could.

When I Snapchatted this look, the only reactions I received online were from people who said they liked the outfit. But in person? Zero. Even when I went to a party in an outfit my friends should've known I'd never sport, there was nothing at all.

Again, the correlation to Jodie's outfit wasn't picked up on by anyone. Personally, walking around in this outfit was just not for me. I felt uncomfortable and self-conscious, likely because this look is so far away from my personal style.

I spent the last day dressed as Daria herself. You might think that taking the time to put together an outfit that resembled Daria would be the cherry on top of a throwback week, but it wasn't.

I instantly got a compliment from a coworker who said that I looked cute and asked where I got my skirt from. Another colleague asked, "What's up with the mustard yellow?" Much like the majority of this experiment, this outfit was something that I felt uncomfortable in. While I would wear all these pieces separately, I just wouldn't throw them together in such a way. I felt frumpy and not nearly as cool as Daria.

So, Would I Do This Again?

Honestly, I love Daria and would re-watch the show itself in a heartbeat. But would I dress like the characters again? Absolutely not. Because my outfits were limited and pre-chosen, I felt trapped and completely unlike myself. It wasn't just the fit of the clothes (shout-out to the flared jeans), but the fact that these old styles were no longer an accurate portrayal of who I am today.

In terms of the reactions I received, it was definitely pretty varied. I anticipated smart and sarcastic comments from coworkers, but ended up receiving a lot more reactions (particularly positive ones) on social media. People are usually a lot quicker to comment through non face-to-face interactions, it would seem.

The face to face reactions were usually filled with hints of sarcasm and general weirdness, particularly the "babyface" remark that tapped into some youth glorification I wasn't super stoked about. Receiving more sarcastic stares and comments from the people I see every day could just be a reflection of how comfortable we are with each other. Maybe it's their equivalent of "keeping it real."

At the end of the day, this experiment taught me that while I love everything about Daria and the '90s (and even the early 2000s), sometimes the era's outfits are meant to be forever contained in the past. Instead, I'll continue to tribute Daria by wearing my glasses and camo jacket and having a sarcastic outlook about life.

More like this
‘90s Streetwear Brands That Are Making A Major Comeback
By Dominique Norman
5 Mini Skirt Outfits To Wear, Inspired By These Brave Souls
By Avery Matera
The 'Hocus Pocus' Sequel Finally Has A Release Date & It Makes Total Sense
By Shannon Barbour and Radhika Menon
10 Nail Trends That Perfectly Capture The Early 2000s
By Paris Giles
Get Even More From Bustle — Sign Up For The Newsletter