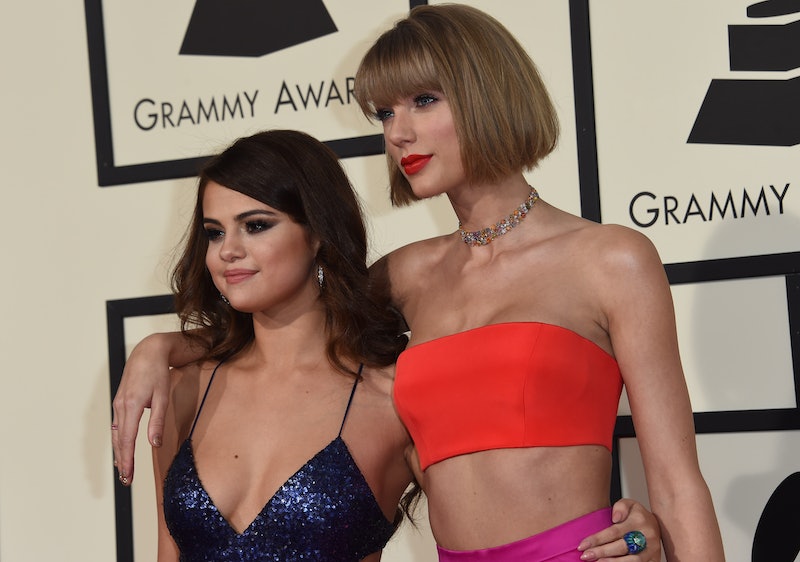 Not only is Taylor Swift opening the 2016 Grammy Awards, but she also already got to celebrate a big win alongside her date since Taylor Swift and Selena Gomez came to the Grammys together. Swift won a Grammy for her music video to "Bad Blood" before the big show started on Feb. 15, so it was perfect she had her bestie by her side since Gomez was the Arsyn to Swift's Catastrophe in the Grammy-winning video. By bringing Gomez, Swift just continues to prove that her squad is way more important than any of those guys she writes songs about.

Both women looked as glamorous as ever and Gomez told Ryan Seacrest on the red carpet that she picked her sparkly blue Calvin Klein dress because it was like something she would wear on a date and that "My date is Taylor Swift." As she said to Seacrest, not only did she spend Valentine's Day with her best friends, but Gomez is also spending the biggest night in music with her friend. And, with Swift being nominated for multiple awards and being the number one audience dancer, Gomez could not have picked a better date.

The beginning part of the Grammys red carpet truly belonged to the BFFs and Swift will surely continue to own the Grammys with her best friend Gomez cheering alongside her the entire night.

More like this
Taylor Swift Wants To Direct A Movie Next — But You Might Have To Wait
By Radhika Menon
Everything To Know About Taylor Swift’s 10th Studio Album, 'Midnights'
By Grace Wehniainen and Jake Viswanath
'Selling Sunset's Vanessa Married Her British Beau Nick In A “Fairytale” Wedding
By Darshita Goyal
What Demi Lovato Really Thinks About Child Stardom, Depression, & Sobriety
By Radhika Menon
Get Even More From Bustle — Sign Up For The Newsletter