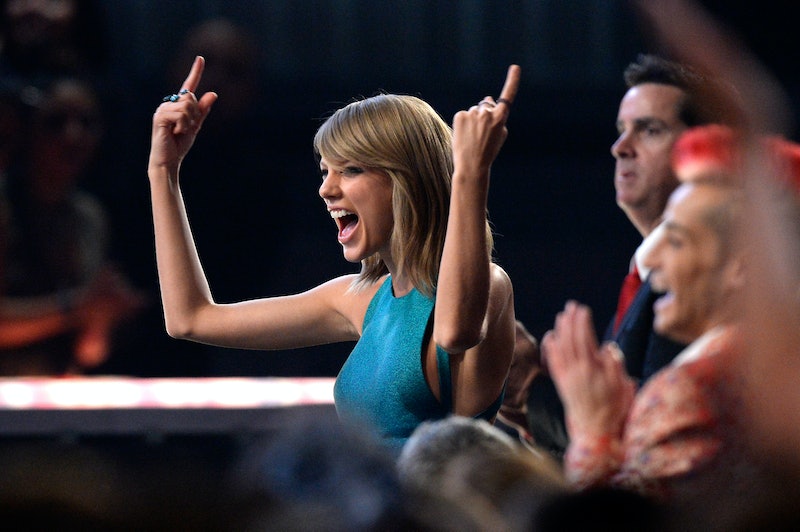 For any fans who were disappointed a few weeks back when it was announced that Taylor Swift wouldn't be performing at the Grammys, the singer's actions at the awards show Sunday night should've acted as a decent consolation prize. While the psychic Swift, up for three awards, didn't take the stage to perform, she didn't exactly stay in her seat, either; alongside her best friend and Grammys date Abigail Anderson, the star spent the night singing along, dancing enthusiastically, and generally looking like she was having an amazing time every time the camera was aimed in her direction.

Not that anyone should be surprised, of course. Swift has made her love for award shows clear time and time again, having been caught grooving in her seat alongside her closest friends at events ranging from the VMAs to the AMAs. And back at the beginning of the month, the singer even posted on Tumblr about her plans for this year's Grammys, saying that she was "really excited" about having a "dance party/rage fest in the audience."

And clearly, she kept her word; as anyone who watched the show saw, Swift seemed to be having a great time all night long. Anderson and fellow Swift friends Haim, who sat right beside the singer, took part in the action, too, dancing alongside the star to everyone else's performances. Whether it was rocking out to Madonna's "Living for Love" or ELO's "Mr. Blue Sky," Swift seemed to be having more fun at the Grammys than practically anyone — well, except maybe Paul McCartney.

Hopefully, when the non-"Shake It Off" parts of 1989 are eligible for awards, Swift will do more than just sway in her seat at shows. The dancing is great and all, but I'm counting down the days until we get to see "Blank Space" or "Shake It Off" performed on the Grammy stage.