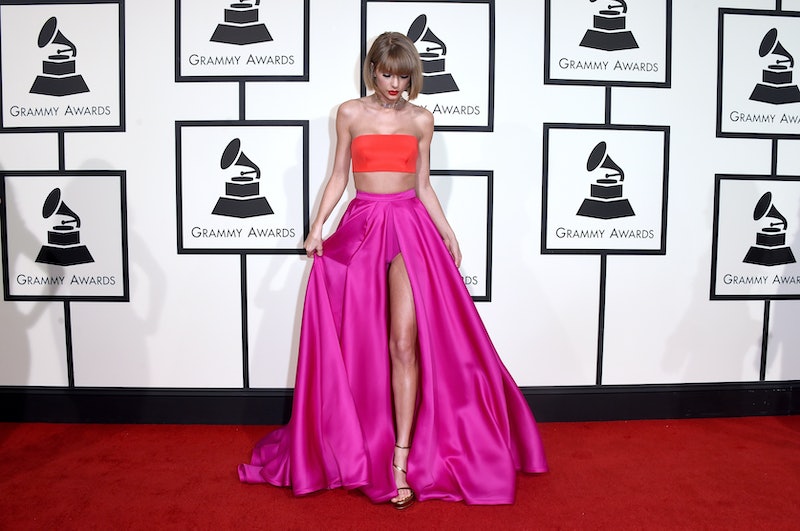 Before the 2016 Grammys red carpet even started, Taylor Swift went wild on social media, excitedly announcing that she won a Grammy for Best Music Video for "Bad Blood." So by the time Taylor actually hit the 2016 Grammys red carpet in a red tube top with a full, floor-length pink skirt, the Internet had already started reacting to her win and to her Grammys look. Perhaps most noticeable brand new bob, and while the jury is still out on whether her cropped do is real or not, the Internet definitely had a lot to say about Taylor Swift's Grammys look.

Here are some of the Internet's best reactions to Taylor's 2016 Grammys look.

Plenty of people pointed out that Taylor's dress looks like an updated version of Bianca Stratford's prom dress from the classic '90s movie 10 Things I Hate About You.

In other '90s nostalgia news, Swift was also compared to a dancing flying fairy, and between the slit in the front and the bright colors, it's not totally off.

Remember The Suite Life Of Zack And Cody? Taylor really could be the missing Sprouse twin.

Schlapman is a member of the country group Little Big Town.

But the most oft-repeated comparison was between Taylor and Vogue editor-in-chief Anna Wintour.

The similarities between the bobs are really uncanny.

And some people even had their own bob-related conspiracy theories.

The comparisons to Anna Wintour continued even after Taylor opened the Grammys ceremony with a stellar rendition of "Out Of The Woods."

But if there's one thing that Internet can agree on, it's that Taylor totally slayed the 2016 Grammys red carpet.

More like this
Harry Styles Performed A Snippet Of Taylor Swift’s “22” & The Crowd Went Wild
By Jake Viswanath
The Very Best Quotes From Dr. Taylor Swift’s NYU Graduation Speech
By Grace Wehniainen
Selena Gomez’s ‘SNL’ Hosting Debut Had Twitter Gushing Over ‘Barney’ & Wigs
By Stephanie Topacio Long
Iris Law's Skunk Mullet Is Not For The Faint-Hearted
By Tomi Otekunrin
Get Even More From Bustle — Sign Up For The Newsletter