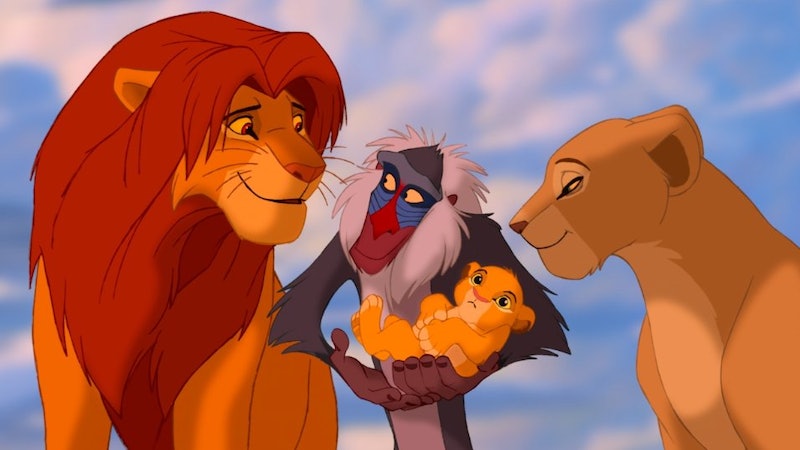 The Lion King was the first animated Disney movie that wasn't based on an existing myth, legend, or fairy tale. As Mental Floss reported earlier this year, all of Disney's animated movies, like Oliver and Company and The Little Mermaid, had been based on preexisting stories (Charles Dickens' Oliver Twist for the former, the Hans Christian Andersen story of the same title for the latter). And today, it also remains Disney's most lucrative hand-drawn animated film; its global box office gross reached nearly $1 billion, and it's the third-highest-grossing animated picture in general. The Lion King recently celebrated its 20th anniversary, and two decades after its release it remains the benchmark for children's movies for every generation. But The Lion King will always have a special resonance for '90s kids: Here's why every '90s kid should rewatch The Lion King . Right now, tonight, if possible.

The Lion King was the one Disney movie your parents put up with watching over, and over, and over. Its themes tend towards adult, and its cast features a few live-action film all-stars (James Earl Jones, Matthew Broderick, Nathan Lane, Whoopi Goldberg, Rowan Atkinson) who wouldn't have much resonance for a young'un but make all the difference for parents. Those same things that made it a smash hit among all generations back in the '90s make it totally worthy of rewatching today.

Mufasa appears in The Lion King for just long enough for you to love him — and then he's brutally taken down in a wildebeest stampede caused by his own brother. It rivals Bambi before it and Up after it for the most gutting character death in Disney history. It's a lot, especially for what's ostensibly a children's movie.

You Realize That Simba Would Have Died, Too

It's been years since I last saw The Lion King, and I simply forgot, or perhaps didn't realize the first time, that Scar also orders Simba's death. And if this were the wild, the hyenas would have succeeded in their murderous mission — Simba only escapes because he must go on to save Pride Rock.

The "Circle Of Life" Really Takes No Prisoners

The animals in The Lion King are aware of their own mortality, and their precarious positions in the food chain. Though "The Circle of Life" seemed a catchy tune when you were a kid, looking back you realize that The Lion King might have more in common with those nature documentaries on the National Geographic Channel (the ones where the cute animals always die) than you initially realized. The Lion King is tough.

Now You Know Who Matthew Broderick Is, In The Flesh

That's Ferris Bueller to you. Broderick voices adult Simba in The Lion King, but his tenor probably meant nothing to most of us four-and-five-year-olds watching the movie for the first time.

Rewatching the movie will just remind you of all the songs that made you love it in the first place.

And The Rest Of The Soundtrack, For That Matter

It won two Oscars, after all: Best Original Song for Elton John's "Can You Feel The Love Tonight" and Best Original Score for Hans Zimmer. As Oscar season approaches, it's worthwhile to revisit a '90s favorite.

If You Grew Up In The '90s, Simba Was Probably One Of Your First Crushes

So what if hes not precisely human? You were young, and kids' movies are just as often about animals as humans. It's only to be expected you start crushing on one of those animal characters.

After studying Hamlet in high school, you'll start to see the parallels between Scar and Mufasa, and King Hamlet and Claudius. As a columnist wrote on Slate, The Lion King offers an even more compelling protagonist-antagonist dynamic: "Scar is a magnificent villain. Claudius is a second-rate schemer, the middle management of evil, consumed by anxiety and guilt. Scar, on the other hand, is more akin to Richard III or Iago, delighting in his monstrosity."

The Biblical Ones, Too

DVD commentary on The Lion King explains that Hamlet was certainly an inspiration, but so were the Biblical stories of Joseph and Moses. The parallels emerge when you revisit the movie with an expanded literary context with which to view the film.

I'm probably in the minority of people who loved The Lion King 2: Simba's Pride, the 1998 follow-up to The Lion King, nearly as much as the original — but I will staunchly defend it. It's a great movie.

Then There's The New Spin-Off, The Lion Guard

This year, Disney resuscitated the franchise for a new television series called The Lion Guard , which brings the beloved classic to a whole new generation — if the recent 20-year anniversary didn't already make you feel old.

Revisiting The Lion King with the perspective of a grown-up '90s kid gives you a unique vantage from which to view all the things that might have gone over your head as a child. And since Disney has recently begun to revisit the franchise itself, with a Lion Guard movie slated for this fall, there's no better time to do so.