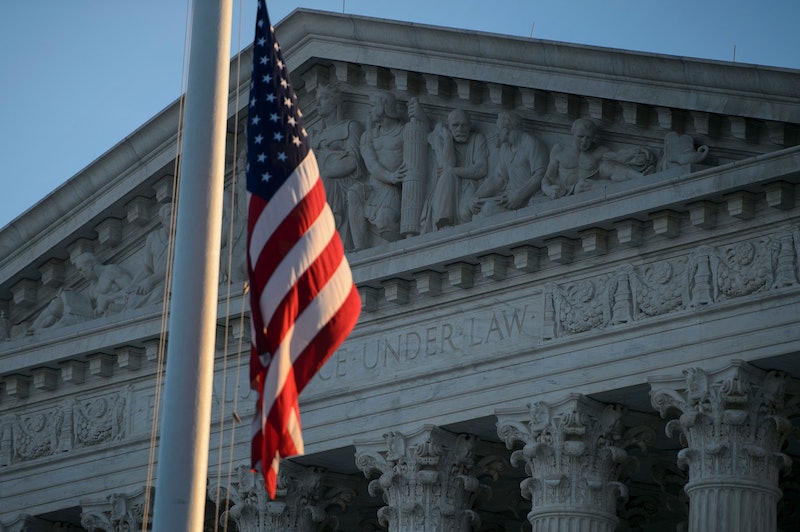 Supreme Court Justice Antonin Scalia's unexpected death on Saturday left an empty seat in the nation's highest court, and confronted President Barack Obama with the question of whether to nominate a replacement during the final year of his presidency. Nominations of Supreme Court justices is the job of presidents, according to Article II, Section 2 of the United States Constitution. However, Republicans in Congress, including Senate Majority Leader Mitch McConnell, are calling on Obama to leave the decision up to the next POTUS. Though McConnell vowed to block any nominee Obama puts forth, in a press conference on Tuesday, Obama said he will nominate a new Supreme Court justice during his final year in office. And one quote from the conference sent the strong message that he won't take no for an answer:

I expect them to hold hearings. I expect there to be a vote. Full stop.

Obama gave a simple explanation for his decision: "There's more than enough time for the Senate to consider … the record of a nominee I present." And he's probably right. The Washington Post reported that it typically takes 75 to 90 days to nominate a Supreme Court justice, including about two months of vetting by the Senate Judiciary Committee. With 11 months remaining in Obama's presidency, that certainly seems like "more than enough time," and Obama's going to make use of it. "I intend to do my job between now and January 20 of 2017," he stated.

Obama said that his nominee will be "indisputably" qualified. He called on Senate Republicans to depart from partisan polarization, saying, "This will be a test, one more test of whether or not norms, rules, basic fair play can function at all in Washington these days." He issued a challenge to his opponents as well: "Anybody who believes in the Constitution, come up with a plausible rationale as to why they would not even have a hearing for a nominee made in accordance with the Constitution by the President of the United States with a year ... left in office."

Indeed, there is no such rationale — not in the Constitution, at least. However, some Republicans are invoking the "Thurmond rule," a nonbinding, made-up "precedent" stating that a president should not appoint nominees in his final year, or sometimes half-year, of office. But to Obama, this is just another example of Republican obstructionism. "This has become a habit, and it gets worse and worse each year," he said on Tuesday.

It’s the one court where we would expect elected officials to rise above day-to-day politics, and this will be the opportunity for senators to do their job.

The Washington Post noted that nominating a justice to replace Scalia in particular may take longer than usual, even if it weren't for the "Thurmond rule" contention. Scalia was a staunch conservative, and Republicans aren't likely to jump up and down for anything less. Regardless of obstacles in the way, Obama has made it clear that he will do his job and make the effort to fill the empty spot in the Supreme Court in 2016.