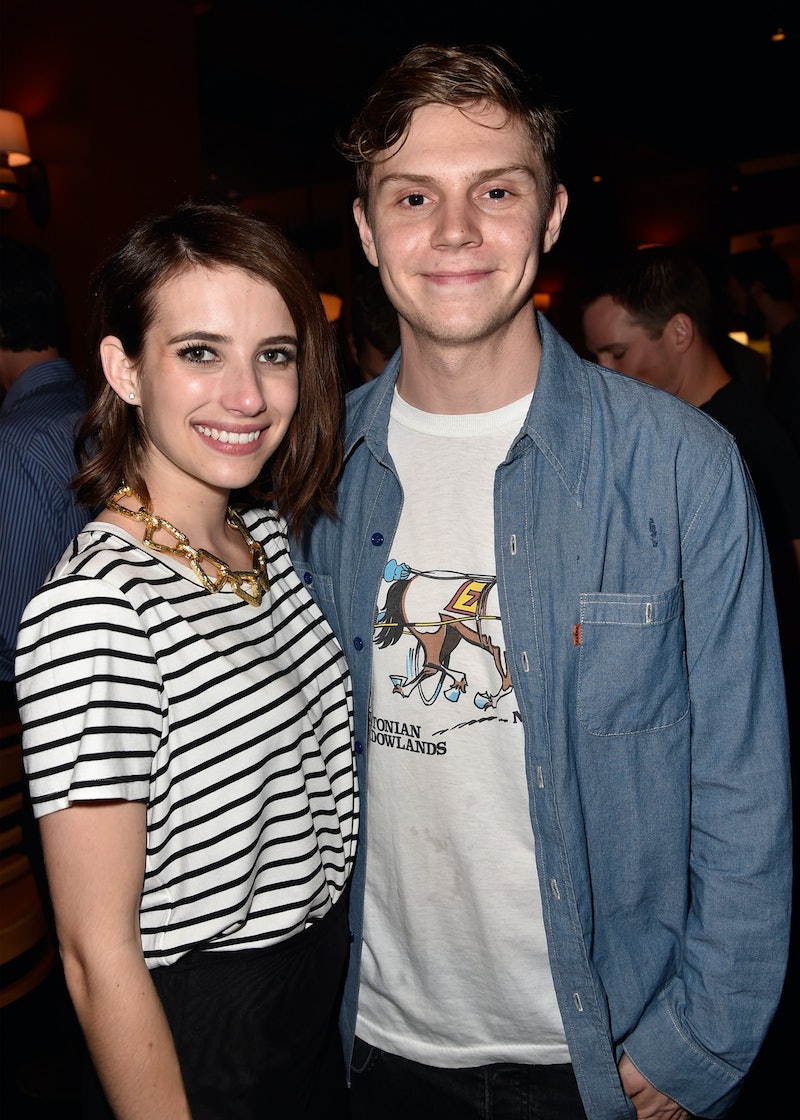 In case you haven't heard the good news yet, let me be the one to break it to you. After a series of very interesting social media posts, it seems as though Evan Peters and Emma Roberts are back together — a huge relief to anyone who was heartbroken when they ended their engagement over the summer (including me). There have been so many pieces of evidence that these American Horror Story costars have finally kissed and made up that it only confirms my belief that they're meant to be, and I couldn't be more thrilled to see them together again. And even though their relationship has definitely had its ups and downs, Roberts and Peters will stay together this time. It's for real. I can just feel it!

Aside from the fact that they spend so much time together because they constantly keep finding themselves on the various incarnations of AHS and the other obvious fact that they are the most adorable celebrity couple on Instagram, it just seems undebatable that they're soulmates. There's a reason they always find their way back to each other, guys, and that reason is true love.

Here's why Roberts and Peters will make it down the aisle this time around. Don't let me down, you two!

1. Time Apart Is A Good Thing

For a lot of couples, a breakup is permanent, and for others, it's more like a "to be continued." In their case, I think Roberts and Peters ended their engagement for a reason and the time apart might have allowed them to work on the things that went wrong in their relationship. Plus, taking a breather isn't always the worst thing you can do.

2. They Still Have A Spark Between Them

Just look at them! This photo was taken less than a month ago. The chemistry is still there, and that's important.

3. Chances Are, They'll Always Be In Each Other's Lives

I'm just saying the American Horror Story franchise isn't dying out anytime soon, so the whole out of sight, out of mind concept isn't at work against them.

4. They Never Stopped Loving Each Other

Back in October, Peters told People that he "just [loves] her" and had nothing but positive things to say about their relationship and Roberts' career. This is just an example of how they were able to remain close, even after their breakup. If their feelings can survive an ended engagement, they can survive a lot more.

5. They're Less Public These Days

In the first half of their relationship, Roberts and Peters were both very active in posting about their relationship on social media. Now, it's way more subtle — they mention that they're dating someone here and there, but they've both cut way back on the number of posts about each other. Keeping things simple this way and just between the two of them is a sign that they're staying low key, and that can be a good thing, especially if how highly publicized their relationship was lead to their breakup.

6. You Can't End A Relationship This Cute

You just can't. It would be wrong.

Peters and Roberts, I'm rooting for you. Here's hoping their wedding becomes a reality this time — when and if they're ready.

More like this
Melony & Gia Prove That Couples Who Grow Together, Stay Together
By Jessica Morgan
Justin & Hailey Bieber's Bond Is "Unbreakable" Amid His Ramsay Hunt Diagnosis
By Bustle Editors
Twitter Can’t Move Past *That* Secret Kiss On 'Love Island'
By Frances Stewart
7 Burning Questions I Have About 'Love Island' One Week In
By Victoria Sanusi
Get Even More From Bustle — Sign Up For The Newsletter