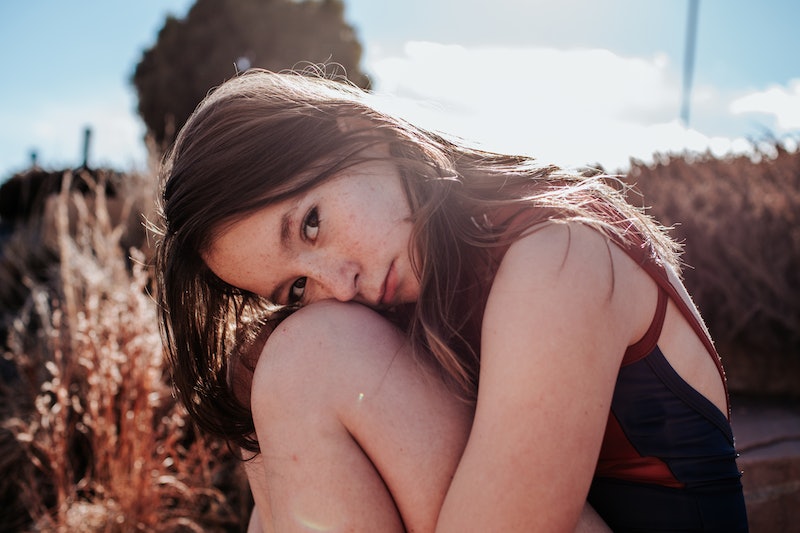 Some people tell their parents everything: Gossip about their friends, workplace politics, and sometimes even the deets on their dating lives. But what if you're being slut shamed by your parents? Even the most well-meaning parents fall prey to it every once in a while; after all, rape culture is so ingrained that slut shaming is a part of most women's daily lives, whether it's a news report questioning the role a victim's outfit played in her own sexual assault or strict dress codes directed solely at women.

That being said, the ubiquity of slut shaming doesn't make it hurt any less when it comes from someone we trust — especially our parents. In theory, family is supposed to nurture and support us even when we make decisions they might not agree with; in practice, this isn't always the case. That being said, it's important to note that slut shaming behaviors are so ingrained that we even do it to ourselves at times. It stands to reason that parents, who probably spent the first two decades of your life telling you what to do, would have trouble letting you control your dating life. On the other hand, nobody should make you feel ashamed of how much (or how little) sex you're having — if your parent exhibits any of the following behaviors, you're well within your rights to let them know a boundary has been crossed.

1. They Pressure You to Settle Down

Almost everyone, especially if you're a woman, faces at least a little pressure from their family to settle down and start crankin' out babies. Some parents may tolerate what they see as your wild college youth for a time, but if they start making pointed remarks about your number of partners as you age, they're veering into slut shaming territory. (Then again, other parents do this from the start.)

2. They Criticize You For Using Dating Apps

It's the refrain of the older generation: "Kids these days are all giving each other STDs with their hookup apps." OK, perhaps that's a generalization, but there's no denying the perception that Millennials are responsible for a "hookup culture" full of rainbow parties and unsafe sex — all facilitated, of course, by so-called hookup apps like Tinder or Bumble. But whether you're using them to find innocent coffee dates or partners for your Saturday afternoon orgy, it's none of your parents' business whether you use dating apps (as long as you're over the age of consent). If they make a habit of pressuring you to delete them because you're "never going to meet someone nice that way," chances are they're trying to control your sex life — and that's slut-shaming.

3. They Tell You How To Dress

It's a tired sitcom standby: The teenage daughter takes forever getting ready to leave the house only to horrify the family (and especially the patriarch) with her short skirt, which she is immediately ordered to exchange for something more conservative. Clothing has no bearing on anyone's self-respect or worth as a human being, but it's often used to determine a woman's status as a "prude" or a "slut." If you want to wear a miniskirt and heels to the grocery store, that's your prerogative, and if you'd rather wear a turtleneck and jeans, that's your business too — not anyone else's.

4. They Ask Invasive Questions About Your Sex Life

Many young people are financially dependent on their parents, which can create problems if the parents refuse to pay for a birth control prescription, claiming their child could eliminate the need by simply abstaining from sex. Fortunately, there are programs in place to provide free birth control to those in need — but that doesn't change the fact that refusing to provide birth control is pretty much the epitome of slut shaming.

6. They Question Your Self-Respect

Whether your sex life is a revolving door or more of a barren desert, your number of sexual partners has nothing to do with your worth as a person. If your parents use your sex life as a reason to question your self-respect, it speaks volumes about how much they regard you — not how much you respect yourself.

More like this
5 Ways To Stand In Solidarity With Women In America From The UK
By Sophie McEvoy
How To Fight For Reproductive Rights, Based On How Much Time You Have
By Courtney Young
GIRLI & Q Fell In Love At A Skatepark & Never Looked Back
By Jessica Morgan
Why You're Seeing Green Bandanas At Abortion Rights Protests
By Lexi Inks
Get Even More From Bustle — Sign Up For The Newsletter