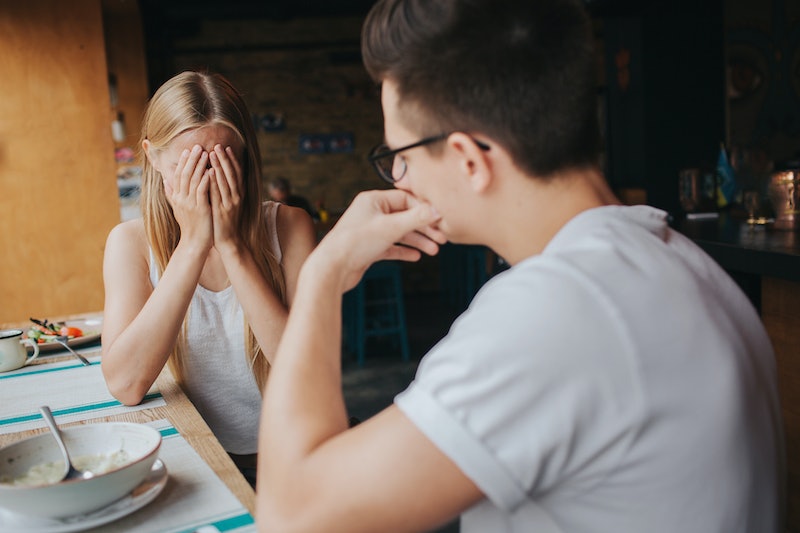 Most women, regardless of how they dress or conduct their sex lives, are familiar with slut-shaming — the attempt to police women's bodies by making them feel bad about being or looking sexual. Sometimes, these attempts come from strangers. But what if you're slut-shamed by your partner or someone else close to you?

The idea that women are less sexual than men — and the corollary that they should be less sexual in order to be respectable — is so engrained in us that we can slut-shame even the people we love without knowing it. Heck, we can even slut-shame ourselves.

Slut-shaming occurs every time somebody tells you that the way you're dressed will lead to unwanted attention (as if sexual harassers don't have the option not to harass you), every time someone acts concerned about your reputation when you go home with someone after a party, and every time someone tries to attribute your sexual assault to your own behavior.

If you notice these signs in your partner, you can try to explain why they're damaging and offensive to women. They may just not understand the implications of their actions. If they're unwilling to change, though, that may be a sign that you have different values, and you deserve someone who does not make you feel ashamed when you're done nothing wrong.

Here are some signs your partner could be slut-shaming you:

1. They Don't Let You Talk About Your Past

Obviously, if you're constantly reminiscing about your ex to your significant other, that could indicate a problem unrelated to slut-shaming. However, you should be allowed to talk about your past relationships when they're relevant, which includes discussing what you've learned about your sexuality from them. If someone tries to police what you can and can't say about your sex life prior to your current relationship, especially if they talk about their own pasts, their efforts could stem from a desire not to view you as a sexual being and a distrust in you for being one.

2. They Act "Concerned" About What You Wear

Your partner's "concern" about your outfit could actually be concern trolling — trying to make someone feel bad about their decisions by expressing concern. This "concern," of course, usually has more to do with their discomfort than yours. You're an adult, and it's patronizing to assume you haven't considered whatever factors they have in mind regarding your clothing, whether that's unwanted attention or even just the weather. And if they're worried that your clothing could attract attention from other people, that's a sign of possessiveness.

3. They Get Unnecessarily Jealous

Jealousy is a natural human emotion, but if somebody feels jealous every time you express your sexuality, their emotions may have more to do with social standards for how a woman should behave than the actual possibility of you leaving them for someone else. You should be allowed to do things that acknowledge your status as a sexual being, like mention celebrities you find attractive or wear a sexy outfit, without feeling like you're doing something wrong.

4. They Place More Responsibility For Birth Control On You

Women in relationships with men are often expected to put more work into avoiding unplanned pregnancy. Women's birth control tends to cost more, have more side effects, and be more cumbersome to use than condoms, yet some men complain about even using condoms. And when a pregnancy does occur despite using contraception, it is often considered karmic retribution for a woman having too much sex too soon. This narrative is popular with pro-life politicians: Arizona solicitor general David Cole once said that late-term fetal abnormalities are "the woman’s problem. She should have made that decision earlier,” and Virginia State Delegate C. Todd Gilbert said women have no right to object to mandatory ultrasounds because they made the decision to be "vaginally penetrated when they got pregnant.” If your partner considers you more responsible for birth control or blames you more if an unplanned pregnancy occurs, they could be unknowingly expressing this same philosophy.

5. They Hold You Two To Different Standards

Since men face less punishment for being openly sexual than women, women who date men may experience their partners getting upset with them for things they do themselves. If your male partner is bugging you about how you talk about your sexuality, what you wear, or any of the things on this list, ask yourself whether he follows all the rules he's imposing on you. If not, you have an easy way to point out why his problems with your behavior may in fact stem from slut-shaming.