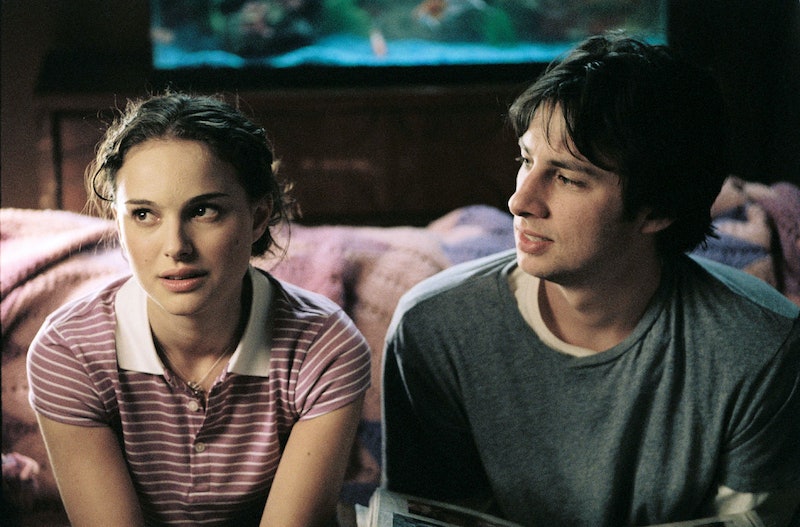 If you were to pick just one year of the '00s that encapsulates the decade's pop culture trends and quirks perfectly, it'd be, without a doubt, 2004. Back then, Jennifer Aniston and Brad Pitt were still together, Beyonce was just starting to go solo, Friends was leaving the air, and Orlando Bloom was everyone's favorite heartthrob. There was Nipplegate, K-Fed, Mean Girls and "Vote for Pedro!," but perhaps nothing captures that era more than Garden State , Zach Braff's now-iconic dramedy about a depressed actor's return to his hometown. The movie became a cult classic, but, thanks to its supposed twee qualities and "manic pixie dream girl" lead, it also became a target for some of the biggest criticisms faced by any film of that decade — which, Braff tells Bustle, even he could've seen coming.

"If something reaches a high enough level of attention, you can just count the seconds before there’s a backlash against it," says Braff, adding, "I always say, to those who loved it, thank you, and to those who didn’t — it was my first film."

Yet while the star has clearly come a long way since the movie's release, with two more self-directed films and an Emmy nomination for Scrubs under his belt, the public has refused to leave Garden State behind. From the bestselling and hugely influential soundtrack to the hundreds of essays written about the film's depictions of millennial culture, Braff's little indie has one of the biggest pop culture footprints of any movie of its era. And although some of those effects have been indisputably positive ("the movie did mean a lot to some people," Braff says), much of the film's legacy has been filled with criticism: for its hipsterdom, for its moodiness, for its depiction of Natalie Portman's Sam as a manic pixie: a shallow, quirky character not there for any more purpose than to fill Braff's Andrew with renewed purpose.

"I was a 25-year-old guy who was writing what he dreamed would happen: a woman would come along and save him from himself."

Over the years, many have come to Garden State's defense in this regard, stating, correctly, that it was far from the first movie to introduce such a trope (that'd be 1938's Bringing Up Baby), and certainly not the last. Yet just as many have blamed the movie for starting the widespread trend of introducing a rather unbelievably formed female character solely as a prop for the far more complex male lead. Even Portman herself has weighed in on the debate, saying at the 2015 Toronto Film Festival that the MPDG is a "troubling trope" that she recognizes existing in Garden State. When I ask Braff his thoughts on the matter, he's defensive, saying that he gets the criticism but quickly adding that the choice made sense at the time; he's willing to admit that the trope exists, but, understandably, denies that it was a mistake to include it in the first place.

"I think that manic pixie dream girl has obviously gotten some snark to it, and I understand the critique," he tells me. "But all I can say is I was a 25-year-old guy who was writing what he dreamed would happen: a woman would come along and save him from himself."

Sam was a "fantasy" character, Braff adds, someone who was "funny and silly and didn’t take life very seriously." Recalls the actor, "Basically, I was writing what I was attracted to."

Clearly, he wasn't alone in that ideal; Portman's character led to the creation of many more like her, from Elizabethtown's Claire to Love & Other Drugs' Maggie to (debatably) Paper Towns' Margo. And re-watching Garden State, it's hard to deny that Sam is an appealing character, even if you admit that her supreme likability is the primary reason for her being such an unrealistic human being. But I understand Braff's frustration — hating on Garden State for leading other films into a manic pixie trend is like refusing to watch Love, Actually because of all the ensemble rom-coms that have come since. It makes little sense, but everyone does it anyway.

"It inspired a trend of certain movies, and people got sick of those types of movies," reflects Braff, citing the now-ubiquity of the type of indie songs found the movie's soundtrack as an example. At the the time of Garden State's production, he says, "We never had any problem with any of that music being overused... but when I was working on [follow-up film] Wish I Was Here, doing the same very process I did in Garden State, going through and falling in love with a song, when we looked it up it was like, 'Oh that’s been on Grey’s Anatomy, it’s been on this show this show, this show, this show....'"

Yet while Braff tells me that he blames our "cynical" culture with helping the Garden State backlash grow, it's clear that he, for one, still views the film with the utmost positivity. He couldn't sound happier as he recalls premiering the film to thousands at Sundance ("I went to the back of the house as the movie started, and I just started crying"), watching Harvey Weinstein negotiate its sale, and seeing it become a hit. For awhile, he recalls, "The word of mouth for Garden State was so rampant in that it was the thing everyone was talking about."

12 years later, everyone still is. For better or for worse, Garden State has become a far bigger presence in the world than anyone could have imagined. And Braff, at least, is nostalgic; he reveals that he still owns the famed wallpaper-matching shirt his character wears above, along with a few other clothing items that he'll "never let go." They're all in a box in his house, unable to be worn (it'd be "so embarrassing" to wear any of them out in public, he says with a laugh) but he enjoys knowing they're there, "like a security blanket."

It's the type of sentimental statement that echoes the kind of twee-ness Garden State found itself so criticized for, but also its merits; like his iconic movie, Braff is incapable of being anything but sincere. And really, in a time where cynicism is the norm, is that really such a bad thing?