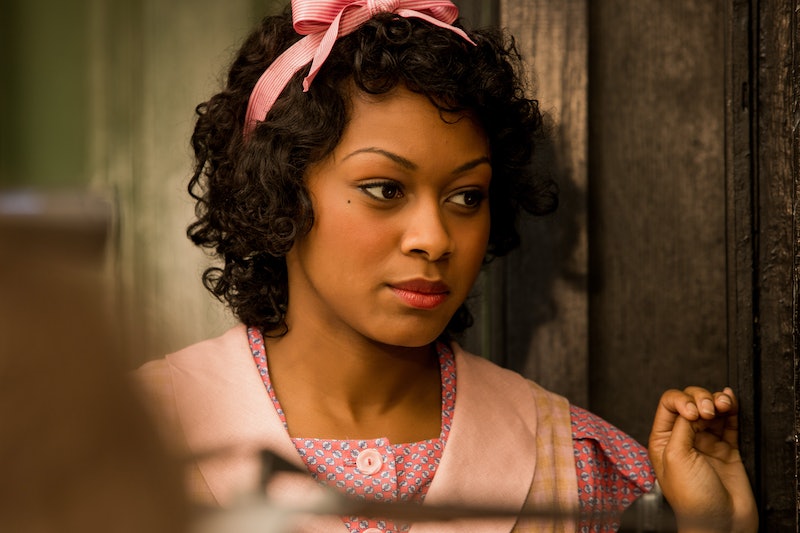 Shanice Banton would be forgiven for being exhausted; her flight into New York was delayed, she's spending her days doing press for her new movie Race, and the film, about the famed sprinter Jesse Owens, is premiering on Feb. 19. Yet at our interview at the London Hotel in midtown Manhattan, she's willing to jump right in — "no life jacket," she says with a laugh —and it's easy to see why; Race , also starring Stephan James and Jason Sudeikis, is her first feature-length film, and it couldn't have come at a better occasion.

"It is perfect timing," Banton says, citing Black History Month and alluding to #OscarsSoWhite and ongoing conversations about diversity in pop culture. This year's crop of Oscar nominees are among the most homogeneous in decades; no actors of color have been nominated, nor are any films telling the narratives of people of color among the Best Picture nominees. So Race, about a black athlete who swept the 1936 Berlin Olympics at the precise moment when Adolf Hitler was consolidating his reign over Germany and when a pre-Civil Rights-era America still relegated its black citizens to the back of the bus, comes at a critical moment for depictions of race in Hollywood. It services as both an homage to a great athlete who triumphed in the face of deeply ingrained prejudice at home and abroad, and as a film that features two black leads in an industry in which that kind of representation is still, 80 years after Owens' greatest accomplishments, all too rare.

I ask Banton if she sees any parallels between Owens' revelation and the way racism manifests now. It's not as overt, she explains — "Some of the things that I see, or that I hear about, they're not really at the forefront of everything. They're kind of underneath, tucked away." And yet, she continues, "We're making progress: as humanity, as black people, white people, for all kinds of people." And it's true that the Academy of Motion Picture Arts and Sciences has pledged to radically overhaul the voting process, doubling the number of women and people of color among members by 2020.

"We’re talking about it. Films are still being made. We’re not left in the dust or anything," Banton says. "And as long as we keep talking about it and discussing it, I think it’ll be good."

In Race, Banton plays Owens' childhood sweetheart, Minnie Ruth Solomon, who romances the legendary athlete during his time of great success. And while the Race filmmakers aren't the only ones with the idea of chronicling the sprinter's life— next year, Anthony Mackie will have his turn on the Olympic podium in a yet-untitled project; 2019 will see the release of Jesse and Me, cast to be announced), Banton's film will certainly have a large impact upon release, particularly on audiences who, like Owens, are facing discrimination. "It's good for people to have something to watch to say, 'OK, he achieved all these great things; I can do it, too,'" Banton says. "That's very important for people to know, and understand."

Although Banton wasn't familiar with Owens' story when she first received the script, she says that she eagerly dove into the role when confronted with the possibility of being "a small portion" of his massive legacy. Jesse and Ruth met as children and spent nearly their entire lives together. "She's really the one person he can go to for anything," Banton explains. "That strong, strong bond, that's really unbreakable." The actor's performance was informed by what she knew of another prominent historical figure: Coretta Scott King, Martin Luther King, Jr.'s wife, who found herself in a similar position to Ruth Solomon during the Civil Rights era of the 1960s. "She had the husband who was this strong leader who was trying to do something great for a huge community," Banton says of Scott King.

Racedoesn't shy away from darker themes; in one particularly striking scene, Owens shows up at the hotel room of a German athlete named Luz Long, with whom he's struck up a friendship after dominating him in the long jump. Long tells Owens how the Nazi leadership had sent a young woman to his room late one night — supposedly in congratulations — who had been tasked with getting pregnant. It alludes to the chilling eugenics policies of Hitler's regimes; Long tells Owens that, utopian as Germany might appear to outsiders (delicious food, attractive citizens), Owens might be better off in the United States. Jesse tells Luz that he's not sure, deep down, that there's much difference between kinds of prejudice.

And the discrimination Owens faces doesn't simply go away, even as the sprinter finds massive success. At the close of Race, after (spoiler alert!) Owens sweeps his three events and leads the relay team to victory in an event he hadn't even trained for, Solomon and Owens attend an event in Owens' honor with his coach Larry Snyder. They approach the entrance to the venue and the doorman stops them, apologizing, refusing to look into Owens' eyes. They have to go around to the service entrance, he explains. Sudeikis' character erupts, but James as Owens exudes the quiet resignation of someone who has had to bear such circumstances his whole life. Banton stands at his side in wide-eyed astonishment.

Filming the scene, "I wanted to cry," Banton says. "It was almost like, 'Are you kidding? Really?' So that moment, mixed with anger and hurt and frustration, ... that scene was really difficult."

Yet as viewers will see, it's one that epitomizes Race's themes — and, considering the conversations being held today, couldn't resonate more strongly.