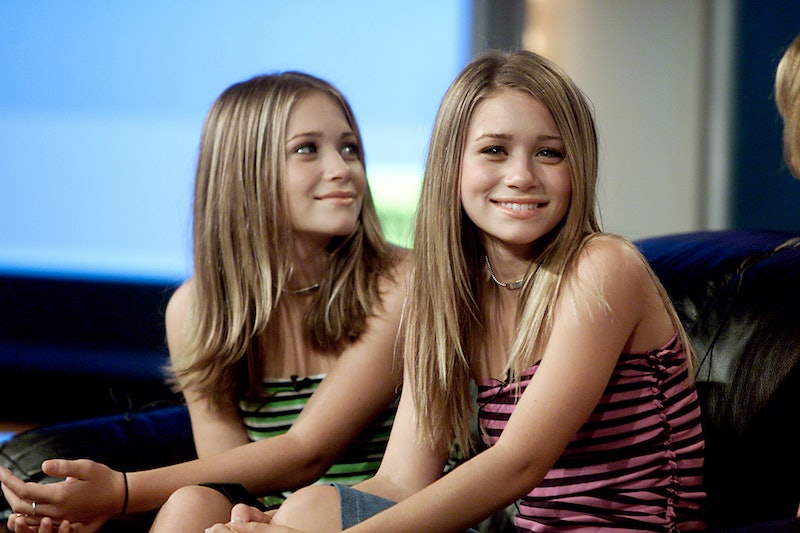 Since '90s pop culture is forever immortalized in teen magazines, music videos, golden excerpts from VH1's I Love The '90s and just about every other form of media you can imagine, it can be hard to grasp the fact that the majority of the decade is now more than 20 years in the past. And then you take one look at the Justin Timberlakes of the world, who, instead of the platinum blonde curls and metallic space-age pants and boy bands, are now a crazy successful solo artists, actors, and fathers (with no bleach-blonde locks to be found). And that's exactly when you remember: Oh yeah, it's 2016. And celebs have certainly changed since the '90s.

In a shocking twist of fate that should surprise nobody, all of those '90s celebs — the ones we gorged on to the point where bedroom walls were barely visible thanks to every life-size poster of Taylor Hanson that Tiger Beat magazine had to offer — grew up to be adults. Adults with different looks, different fashions, and sometimes, drastically different careers. And isn't that what growing up is all about — rocking new styles and finding yourself and foraying into new careers and becoming adults? For these '90s celebs, it certainly is.

The Justin Timberlake of the '90s was the curly-haired lead vocalist of *NSYNC, the heartthrob whose face adorned your walls and invaded your dreams. Even from the *NSYNC days, JT was being groomed to go solo, and go solo he did: With a nine-time Grammy Award-winning solo career and a surprisingly successful foray into acting — The Social Network gave him critical acclaim, but "Dick in a Box" will forever be my personal fave — Timberlake is certainly killin' the game all by himself. Who knew that baby-faced Mousketeer would go onto be halfway to an EGOT? Answer: We all did.

'90s MK & A gifted us with their dual role as Michelle Tanner on Full House and the perfect phrase to accompany a thumbs-up ("You got it dude!"). Between the Olsen Twins' direct-to-video movies (gems like The Adventures of Mary-Kate & Ashley series, It Takes Two, Billboard Dad, and so much more) and their unbelievable popularity, it's no surprise that Mary-Kate and Ashley created a $1 billion empire for themselves. And when they made a conscious decision to step away from acting to focus more on being legit fashion icons — creating high-end fashion lines like The Row and Elizabeth & James — of course they slayed at that too, even being awarded with Accessories Designer of the Year in 2014 from the CDFA. And even though they're not back for the Fuller House reboot, I'm still secretly holding out hope they'll reprise their role as Michelle.

1997 was the year that the public was introduced to Hanson, the three blonde, long-haired brothers from Tulsa, Oklahoma whose sunny smash hit, "MMMBop," propelled their debut album Middle of Nowhere to go 4x platinum. Since the '90s, Hanson cut their locks, left their record label (and started their own), and released five studio albums. The guys also honed in on their sound, creating distinct and mature soul-infused pop-rock jams that honor their trademark Hanson harmony, all while cultivating the same hardcore fan base that has been with them throughout their entire decades-spanning career.

With her hit single "I Wanna Love You Forever," virginal Jessica Simpson burst onto the pop music scene in 1999, very blonde and very vocal about her decision to remain a virgin until marriage. Since her days as a preacher's daughter, Simpson has gone on to marry and divorce Nick Lachey, question the contents of Chicken of the Sea on Newlyweds (genius TV), marry Eric Johnson, and become a mother of two. Simpson also created and heads a crazy successful fashion line (that $1 billion empire doesn't lie!), where she creates some of the only high heels to ever fit me properly. And for that, I salute you, J. Simps.

Gaby Hoffmann certainly made her way around the film circuit in the '90s, playing the adorable little girl in everything from Sleepless in Seattle to Field of Dreams . In 1995, she starred in my personal bible, Now and Then, as the angsty Samantha, who — along with Roberta, Teeny, and Chrissy — helped define the original #SquadGoals. In the years since her child stardom, Hoffmann tried on a bunch of different careers (including a stint as a doula) before settling back into acting, with bold, unapologetic (and frequently nude) roles on Girls and Transparent.

A young, blonde Mandy Moore burst onto the pop scene with "Candy," which, as it turns out, is way more of a suggestive music video than I remember it being in the late '90s. After a straight-up iconic role as Jamie in A Walk to Remember (and releasing "I Wanna Be With You," everyone's favorite middle-school slow dance song), Moore's music career stalled in the mid-2000s. But no fear — her turn as Disney princess Rapunzel in the 2010 Disney classic Tangled rejuvenated Moore's career.

Thanks to the magic of television and also aging, Neil Patrick Harris went from playing kid doctor Doogie Howser to womanizer Barney Stinson on How I Met Your Mother. Who knew that portraying an outlandish, fictionalized version of himself in Harold and Kumar in 2003 would rejuvenate Harris' post-child star career so immensely? In addition to his success in acting in both television and theatre (he already has the Emmy and Tony portion of the EGOT down), Harris has hosted both the Tonys and Academy Awards. NPH is also married to fellow hottie David Burkta and has the two cutest kids known to man.

Macaulay Culkin didn't just shake off his baby-faced, child star persona, he pretty much threw it over a bridge and never looked back. While the actor changed up his look significantly (goin' more for the eccentric rocker style), he also fronts a pizza-themed Velvet Underground tribute band and revealed that Kevin McCallister kind of turned into an unstable homicidal maniac following the events of Home Alone and Home Alone 2. Yikes.

'90s Kirk Cameron was a bonafide heartthrob, thanks to his role as the good-natured hottie Mike Seaver on Growing Pains. That teen heartthrob status didn't exactly follow him into later decades, but it has nothing to do with his good looks — more so for the fact that Cameron is a devout born-again Christian who frequently makes headlines for his intense conservative beliefs, like when he told Piers Morgan of homosexuality: "I think that it's — it's — it's unnatural. I think that it's — it's detrimental, and ultimately destructive to so many of the foundations of civilization."

Haley Joel Osment's turn in The Sixth Sense as Cole, the little boy with the ability to see ghosts, turned the actor into a '90s icon and Academy Award nominee. While the actor's next few films brought him critical acclaim, Osment has yet to match the success of The Sixth Sense — which, to be fair, is not exactly an easy feat. Osment, whose younger sister is Emily Osment, has grown up since those days of seeing dead people, and is still acting today.

Whether you remember Jonathan Lipnicki as the cute kid from Jerry Maguire or the cute kid from Stuart Little, spoiler alert: 2016 Jonathan Lipnicki is still cute, only this time he's also hot and grown up and super in shape — thanks to a serious hobby as an MMA fighter. However, he maintains that while MMA is a passion of his, acting is still his career and his top priority. That's right: Lipnicki is still in the game, and one look at his IMDb page will tell you that the guy has racked up a wealth of credit to his name since those early acting days in the '90s.

No matter where these stars have landed today — successful in a different venture, successful in the same venture, slightly less hot, just as hot if not hotter... — I'll ad-lib a line from Casablanca to put it best: We'll always have the '90s.

More like this
The Banned 'Friends' Ad Shows Monica As You’ve Never Seen Her Before
By Sam Ramsden
'Friends' Star Maggie Wheeler Offers Support To Matthew Perry After Reading His Memoir
By Alyssa Lapid
Twitter Is Having A Field Day Over Mr Blobby’s Costume Selling For £62k
By Catharina Cheung
Reese Witherspoon Confirms This Fan Favorite Will Return For 'Legally Blonde 3'
By Jake Viswanath
Get Even More From Bustle — Sign Up For The Newsletter
From hair trends to relationship advice, our daily newsletter has everything you need to sound like a person who’s on TikTok, even if you aren’t.