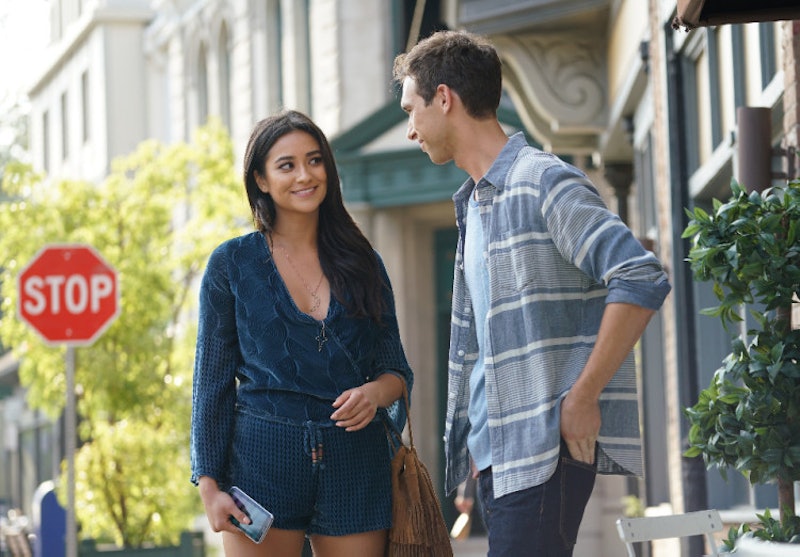 You can't trust anyone in Rosewood and Damian Hayes on Pretty Little Liars is (probably) no exception. We first met the journalist in the Jan. 26 episode "The Gloves Are On" when he interviewed Spencer at Hollis, supposedly about millennials and politics — but the questions turned personal fairly quickly when he asked Spencer if her real reason for staying in Rosewood was Charlotte's murder rather than her mom's campaign. Damian expressed surprise when Spencer described the death as "upsetting" and he pointed out that people on social media assumed she and her friends would be celebrating. Spencer wisely peaced out of the interview when she realized Damian was solely interested in questioning her about her experience in the Dollhouse and Charlotte's murder. But, we haven't seen the last of this sketchy journalist — Damian will resurface in the Feb. 23 Pretty Little Liars episode "We've All Got Baggage" and, from the looks of it, he's going to try to get information out of Emily.

Spencer re-visited Damian at Hollis in "The Gloves Are On" to confront him about his true reasons for wanting to interview her. During this second meeting she saw that he had a note to call Mona and he revealed that she was working for the rival campaign. Since she was also one of Charlotte's victims, this whole thing was super suspicious and it got even more so when Melissa told Spencer about her own interview with Damian. He apparently excused himself to take a phone call and returned with a different line of questioning. Melissa also claimed she saw some concerning words written on his notepad, including "cover-up", source," and "tape." This episode also marked the first time in Season 6B that the Liars received a creepy, anonymous text from the new Big Bad. Coincidence? Maybe, but maybe not. And, it gets worse — based on this clip from Freeform, it looks like Damian's going to cozy up to Emily next:

I'll always have a special place in my heart for Emily because she's the kindest character on this show, but let's be honest — she's not always the best judge of character. Despite everything she's been through, she always looks for the best in people and sadly that's not always an asset in Rosewood. Case in point — Emily let the ever-sketchy Shower Harvey live with her and even formed a romantic relationship with Sara before she was revealed as Red Coat and Black Widow. Spencer presumably never mentioned her unnerving interview with Damian to Em, so it's easy to see her becoming friends with him and confiding in him after this psych lecture they plan on attending. I mean, they look pretty friendly walking the streets of Rosewood together and it concerns me.

Of course, it's entirely possible that Damian is a red herring and he's simply an overzealous investigative reporter who's desperate to land a major story about the Liars, their experience in the Dollhouse, and their possible involvement in Charlotte's murder. Alternatively, he could be working for the new Big Bad — and, like Shower Harvey, Damian will attempt to get intel about the Liars via Emily.

Based on his Twitter and Instagram activity, Berris seems super excited about appearing on Pretty Little Liars — but he's offered few clues about Damian. This was his response when a fan asked if viewers will like or dislike his character:

I've got my eye on you, Damian — Emily has been through enough.