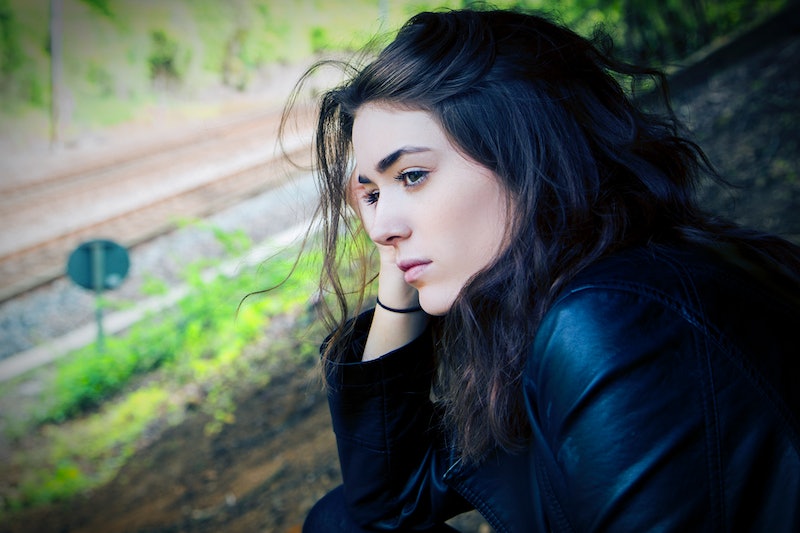 Hey, guess what? We all make mistakes. Crazy, right? And all of us — even those who seem to totally have their sh*t together on the surface — have gone through our periods of doubting ourselves and need to feel more confident. Some more often than others. It gets to a point where every decision we've made, conquest we've undertaken, or just simple thing we try to get done, fails. It may not necessarily fail, but it just doesn't feel quite right. Or isn't good enough. We seem to think we're missing something everyone else just gets. Like there's a secret way of doing things and living life that somehow got by us.

Sound familiar? It probably should, because you're not alone in feeling this way. It hits people in different areas of life, whether that be in relationships, work, or a SoulCycle class. (I may or may not be projecting a little here.) And when one thing goes "wrong," it can certainly feel like a chain reaction of failure after failure on your part. Now I'm not about to throw you a "how-to"guide on living your life and doing everything right. Because there's no such thing.

But what I can say is, it does help to take a hot sec to breathe, smooth out those ruffles, and readjust those glasses so you can see things from a better perspective. How? Here are a few things you can do when it feels like you're doing it all wrong.

1. Examine Your Failures, But Don't Obsess Over Them

It's good to look into the things that obviously didn't quite work out like they were supposed to. Doing so will help you figure out what went wrong so it doesn't happen again. But it's not always that simple. Sometimes it's hard to figure that part out. Yet as Forbes contributor Susan Tardanico pointed out, obsessing over your failure will not change the outcome. You'll only be trapped in a toxic emotional loop that won't do you any good. Instead, Tardanico suggested looking at it analytically and from all angles, to see what insight you can gain for a better result in the future.

2. Focus On What You Can Change

And when you have examined the apparent wrongness of everything you're doing, tap into the things you can do that are in your control to change. As author and personal coach Tony Robbins told Entrepreneur, if you want to shape your actions, the fastest way is to change what you focus on and shift the meaning to be something more empowering. So rather than thinking of it as some major screwup, use it as a learning opportunity to curiously explore. Approaching such issues with a problem-solving attitude rather than frustration and self-pity will get you so much further. Because there's always something you can do. If that means doing a little research and educating yourself or reaching out to someone for advice, the power lies within your decision to actually do something about it.

3. Remind Yourself Of What You've Done Right

If you're stuck in this negative thought process of repeated failure, it'll eventually be pretty hard to believe you can do anything right. You lose sight of those significant successes, and probably lose an accurate perspective of where you actually stand in your endeavors. The way Lifehack put it, when we realize how powerful we were in overcoming earlier curveballs and conundrums at different points in our lives, we'll remember that we totally can, and will, find a way to figure this one out too.

4. Rethink What You Consider Wrong

Another factor to consider may be the way you are defining your failures or just what you're doing wrong overall. Entrepreneur contributor Jeff Boss cited former MIT professor and organizational development expert Edgar Schein's beautiful example of using what's called cognitive broadening. He pointed out that while a compass is understood as a tool to navigate across land, one also uses an internal compass to navigate "right" and "wrong." But at the end of the day, it's all just navigating and getting to a different place. Every failure is a learning opportunity that brings you one step closer to where you need to be. Whether that's with a failed relationship, messing up at work, or totally riding that full 45-minute SoulCycle class in the wrong position, now you know.

5. Talk About It And Ask For Help

And when you still just feel like you're messing it all up and you've come to no solution, don't assume you have to figure it all out on your own! Pretty sure there are a few people on this planet who can help you. Talking it out may also help relieve some of the pressure you've placed on yourself when you realize that it's not so bad or even that you're not alone. According to a New York Times article, asking for help is something many people have trouble doing. We view it as some sort of deficiency, Garret Keizer, author of Help: The Original Human Dilemma told NYT. But rather than let the situation spiral out of control and your self-doubt grow, reach out and see just how quickly you can resolve some things.

Finally, maybe it's not working out because you're focusing on achieving the wrong things. As pointed out on The Huffington Post, establishing outcome-oriented goals is dangerous. Since you don't have direct control over your ability to reach that larger goal, any failure can be damaging if you blame yourself instead of recognizing that the outcome was lofty. That's not to say you can't dream big. Per tip number two, by focusing on what you can change, try establishing action-oriented goals. For example, rather than thinking about fitting into a pair of jeans, grant yourself access to small wins by shifting your desired outcomes to completing your workouts. Each time you complete them, that's one more thing you did right, and in tune with what you wanted.

And all those little rights will eventually outweigh that giant wrong you've constructed for yourself.