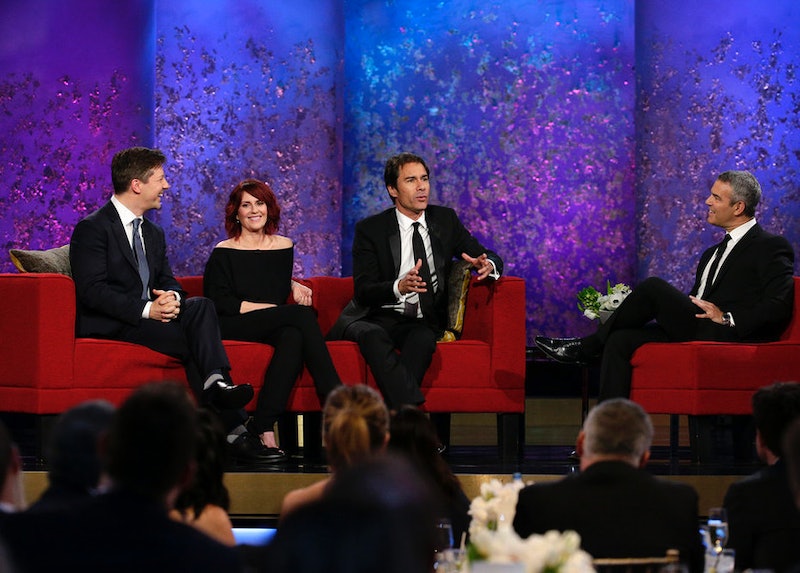 Although the most-anticipated moment of Must See TV: An All-Star Tribute to James Burrows was the Friends cast reunion, other memorable television casts came to honor the TV producer. When the cast of Will and Grace opened the show, Eric McCormack, Megan Mullally, and Sean Hayes reminisced about their hit NBC show, which Burrows produced and directed. And Hayes and Mullally even predicted where they think Mulllally's hilarious character, Karen, would be today.

After a video recorded message from star Debra Messing, Andy Cohen interviewed McCormack, Hayes, and Mullally on stage at the tribute event. When Cohen asked them what Karen would be up to in 2016, Hayes and Mullally both jokingly agreed that the heavy-drinking character would be dead. Yet, if thinking about the sassy Karen being dead is too depressing, Mullally offered another alternative: Karen would be married to Republican presidential hopeful Donald Trump. With her slew of ex-husbands and questionable morals, Karen marrying Trump on Will and Grace would make for an episode I would love to see.

Mullally is notably married to Nick Offerman, an actor behind a memorable TV character of his own, but her alter ego Karen would be perfectly suited for the man who just won the Republican South Carolina primary in a landslide. (Karen would love the lavish lifestyle, as long as their major egos didn't clash too much.) Besides Karen's future, the actors also talked about more serious subjects, like the sitcom's cultural importance. For instance, in 2012, Vice President Joe Biden credited Will and Grace for helping shift Americans' perspectives of the gay community. But just like the show they were on, the actors balanced funny with serious and I was left thinking how ludicrous and show-appropriate a Karen-Trump marriage would be. Oddly, that storyline would have even been funny when the show originally aired from 1998 to 2006.

Though it was great to see three-quarters of the Will and Grace cast reunited on stage during the Feb. 21 tribute, don't hold your breath to ever see an episode about Karen's 2016 life. Plus, if it actually involved a Trump marriage, it's almost better for fans of the show not to see it.

More like this
Watch Benedict Cumberbatch Lead An ‘SNL’ Medieval History Lesson On Roe v. Wade
By Grace Wehniainen
The True Story Of Candy Montgomery From Hulu’s True Crime Series
By Radhika Menon
Cardi B Explains To David Letterman Why She Uses Her Star Power For Politics
By Jake Viswanath
Kim Kardashian Remembers Her Last Words To Death Row Victim Brandon Bernard
By Jake Viswanath
Get Even More From Bustle — Sign Up For The Newsletter